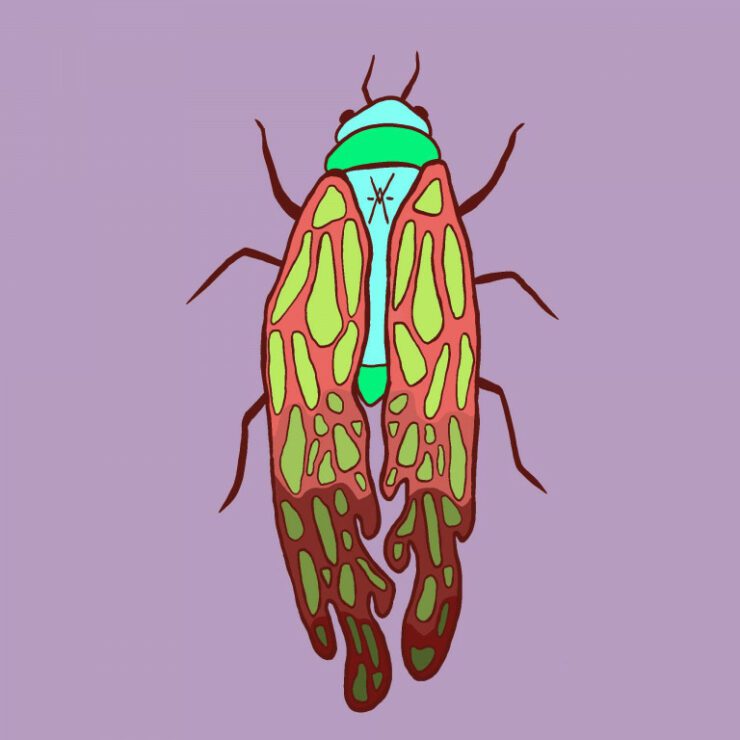 Cicada’s Children is an unusual, unsuspecting piece focused on the methodology of cults for establishing themselves, recruiting new members and creating the process of transforming ordinary people into dedicated ritualists. Danny is on his way home from work when he finally decides to pluck up the courage to speak to the mysterious girl offering free coffee out in the street. He’s terrifically nervous and uncharismatic, but the girl, Bella, seems to fall for his goofy charm and manages to rope him into handing out eco-flyers that evening for her free café. She’s got an ethos – she wants to start a cafe without any money involved, with all organic coffee, and thinks she can find people to get interested in it outside the pub that evening. Meanwhile, a mysterious bandage covers her hand the entire time.

The scrupulous among you might have realised that there’s a lot underneath the surface here, waiting to be revealed, and I don’t want this review to just be a litany of spoilers, but the show’s publicity leaves a lot open already. Bella is a member of a cult called Cicada’s Children, led by the mysterious and incarcerated Stanley Cicada. With all her family members locked up for varying cult-related crimes, she’s left to try and rebuild from the rubble, with only Stanley’s teachings to guide her. We first see the build-up from Danny’s side – as he returns to Bella’s flat we see him undergo a psychedelic, paralytic ‘transition’ in which he can no longer move his legs. The story diverts as Bella tries to burn the Cicada symbol into his hand, and we witness the same tale regurgitated from Bella’s much more insidious side. We become privy to the process of transition that Bella wants to see in Danny, and join back right at the end to see the aftermath.

It feels as though there was a lot of opportunity to create something really special and unique here, and it was missed. The whole aura of the Cicada cult is beautifully created, with an ominous stamp on your hand as you come in, and in the first half of the play a real nervous excitement to find out what lies beyond Danny’s ‘transition’ and understand more about the nefariousness of the family…. Then it just ends. The moment I realised that the structure of the play was going to be the same thing from the other side, I was hopeful that they would make some headway with it – but everything that we learn about Bella’s upbringing, Stanley and the teachings of Cicada can be found in the show’s EdFringe listing. May Tree Productions created something deeply engaging and exciting, and then did little to nothing with it.

The performances from the two central actors are pretty interesting. Danny is a pitifully dull, uninteresting person, the perfect victim, and his general nervousness is well-performed, in the intonation of his voice and his fluttering around Bella. His naiveness and gullibility shines through, unfortunately to no real end. Bella, as a succubus figure, gives her best ‘Manson Family’ innocent young woman trope, her sense of lostness becomes deeply apparent in the second half of the piece. Unfortunately, as my criticism lays out, the generally well-rounded performances are used to deliver no punch, no message. Even the aura of mysteriousness starts to dissipate toward the end of the piece, as we realise we’re not going to learn anything more about the cult than what we’ve got from the flyer.

Mysterious, creepy and dark, the performances just about hold this piece together. Unfortunately, May Tree Productions have decided to highlight the wrong section of this story, and should be showing the audience what happens next or what happened before.

Recommended Drink: Try the free coffee, you won’t be disappointed.

Catch Cicada’s Children at TheSpace on North Bridge – Argyll Theatre, at 21:05, until August 27th (not the 21st). Tickets are available through the EdFringe Box Office.

A Digital Pint with… Wes Savick of Juvenilia, bringing Civilian Defence and pre-emptive panic to the stage at EdFringe 2022