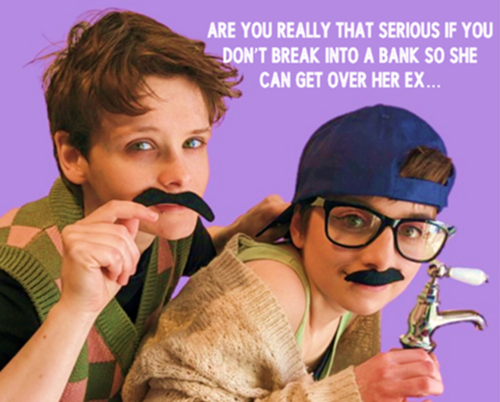 It’s the story of a bank heist, in which the target is a double date with your ex-partner and their new lover. What can go wrong? Rory wants to propose to Spencer, has got the ring and all, then Spencer arrives in the pub to recruit them for a heist at… you guessed it, the Bank where their Ex works. This is a fun, joyful and playful mess-about with the heist genre and the concept of compact, minimalist theatre. All in all, it’s fabulous fun.

The piece is littered with sections of great physical comedy, including a section in which Spencer seems to summon all the energies of a Buddhist monk in defeating the sentient lasers which (apparently) exist all across the world. Later, we see the pair tap lightly around the stage with flex and fancy as they sneak past cameras and try not to catch the attention of the definitely-not-velociraptors Security Guards. The pair have fantastic chemistry and complete trust in one another, proving you can do a lot with very little.

All there is on stage is a table, two stools and a big set of blueprints which act as shroud, blanket and all other kinds of inventive things. It’s compact theatre at it’s very best, transporting the audience into a whimsical world with a flimsy, playful sense that you never quite know what’s coming next. There is absolutely zero internal logic to the piece, which takes place half at a pub table and half inside the bank’s walls. Like any great heist movie, there are twists and turns which keep you enthralled, even if the tension is very low given the hilarious nature of the events unfolding in front of you.

The piece is, bizarrely, also a love story. Rory is ready to propose to Spencer but keeps getting distracted by the disastrous, hell-wreaking plan to get inside that bank vault. One part I loved about this show was its queer representation – subtly built in and completely making it just a regular part of their world. It’s a reminder that queer comedy can be just that if it wants to be – comedy that is queer, showing not telling. Without ruining too much story-wise, there is all kinds of silliness that comes later on in the show to justify some of the crazy plot points. Nonetheless, it’s a romp, it’s a riot, it’s so fucking stupid you can’t help but fall in love a little bit yourself.

We were subject to a few unfortunate things during our performance – firstly there were some technical issues. This is not the be-all-and-end-all of a production, and if sharply dealt with then the audience can feel comfortable that they’re in safe hands with both the performers and technicians. Unfortunately, the performers fell a little short here. They were very obviously thrown off, which again can be resolved, but definitely not by looking at the tech team and nervously laughing.

Hey, look, putting on a Fringe show is a nerve-wracking deal and the whole situation is crazy and intense – much like this fun and silly show. Unfortunately this situation took away a little bit from my experience in The Bank Where Your Ex Works and I feel gutted I didn’t see the piece at it’s best. There’s a monster show waiting to burst out here – all it needs is a bit of polishing and maybe a wee bit more commitment to the act to get it over the line. This performance is part of the University of Worcester’s Touring Theatre programme, showing that there’s definitely room for development and I’m sure it’ll get there eventually.

A rowdy, manic, farcical heist – you can be sure to find your funny bone in The Bank Where Your Ex Works.

Showings of The Bank Where Your Ex Works have now concluded for this EdFringe. Keep up with the company on Social Media for future performances.