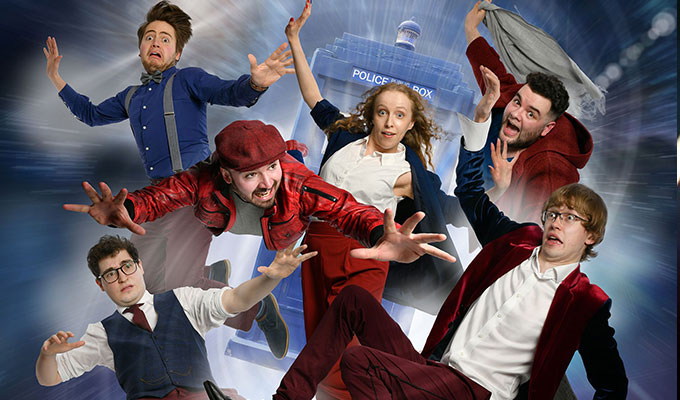 At the Edinburgh Fringe the choice of shows is overwhelming. The comedy in particular is a highly saturated market, and to compete there is an extremely difficult endeavour. The seemingly endless supply of Accapella, Shakespeare-with-a-twist and comedy improv shows are particularly abundant.

The standard of these types of shows vary hugely, and when it comes to improv comedy the standard can change day by day as the actors are not only relying on their own ability to improvise but also on decent and reasonable suggestions by the audience. One very effective way to achieve greatness with improv is by establishing a theme or genre. This particular company have decided to base their improv on arguably the best and certainly the longest running science fiction television series the world has ever seen.

I love Doctor Who.

As such I was sceptical when my friend suggested we go to see Any Suggestions, Doctor? by Any Suggestions Improv, but as a fringe goer and performer I was keen to see as many shows as I could, regardless of any preconceptions.

Suggestions from the audience provided the backdrop and setup for the performance.

The setting: Earth in the distant future.

The unusual change: Mosquitoes are the size of human heads (albeit one specific human head).

The episode title: ‘Daleks do Pride’

The entire set up of the story was enjoyable but I honestly had no idea what to expect of the show itself. However, once a TARDIS money box on a piece of string took to the stage to be a part of the title sequence the tone was quickly set. It was at this point I started to relax and revel in the joyous madness this show was sure to bring. I was not disappointed.

With character costumes cobbled together from props which looked like they had been pulled from a skip or any budget costume show you care to mention; improvised music from the musician; a story that surprisingly made more sense than some of the canon episodes; fantastic comedic improvisation; references to the show that doesn’t alienate the rest of the audience and a wonderfully Doctor-y performance all led to a fringe show I found myself recommending to others. All the actors brought brilliant energy to the stage. It is my belief that improv shows have to have one thing over anything else: a cast who are blatantly having fun. Any Suggestions, Doctor? has this in spades. One example being the actors revelling in setting each other up for future scenes (with rule one of improv being to always say ‘yes’). A particular highlight for me was the set-up of Robo-Britney (yes, even The Doctor can’t escape the legacy of Britney Spears). Who was reminded at various stages that they were expecting “a rendition of all her greatest hits later on!”. Silly and fun, everything it should be.

I was thrilled with this show, with my only personal addition being a regeneration scene (that would have been gold). An absolute fringe must see, whether you’re a fan of Who or not.

Any Suggestions, Doctor? An Improvised Adventure in Space and Time by Any Suggestions Improv will run until the 26th August at 16:00pm daily (excl. Mondays). Tickets are available from the Fringe Box Office.