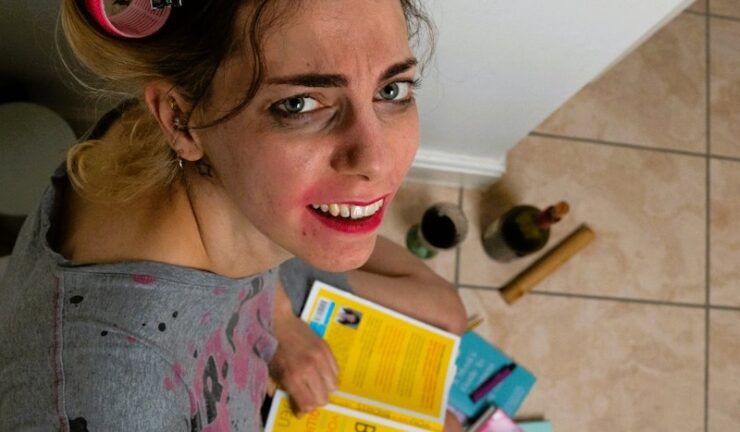 Time for a royal flush! Today we’re joined by Cláudia Saveedra for a digital pint on the throne. She’s bringing her play The Best Ideas Happen in the Toilet to EdFringe this summer, and we sat down for a chat about everything acting, shower thoughts, dodgy landlords and ex-boyfriends. Take a seat and let’s dive in!

Jake: So, first up, did you come up with the idea of the show while… on the throne? What are the best ideas you’ve come up with in the toilet?

Cláudia: Yes and no. Whilst I’m sure I have had many great ideas on the throne, this is more a collective of shoughts (shower thoughts). The toilet is a sacred place for women, and the title resonates with how much time we spend in the bathroom. It’s where we get our first period, where we find out if we’re about to bring another human into the world, where we go to cry, get away from the kids, the annoying guest, and where we go to look at our naked body.

Women love going to the bathroom together to debrief throughout the night and have their deepest chats. And so, Frankie is looking to do exactly that – she is asking the audience to leave their opinions at home and to join her for 50 minutes inside her very convoluted brain.

Jake: Frankie’s character probably resonates with a lot of creative people, the idea of trying to live your dream in an indifferent or hostile world, did it come from your own experience as a performer?

Cláudia: Yes, and other creatives too. Like I said this is a collective of shoughts, but not only my shoughts. The main theme of the show is authenticity, and we must ask ourselves why we follow the rules we do. Whether it be in the industry or life in general. We spend our lives being told what we should or shouldn’t do, and that is then topped with industry ‘laws’.

The industry is what you make of it, just like anything in life, but I still don’t believe that there is enough support for people starting out in the arts. Those more successful definitely get put on a pedestal and we seem to forget that we do all wipes our arses in the same way. We live in a world where we can’t say anything anymore without the fear of being cancelled.

But then it’s like, yeah we live in free country. Right… This story will resonate with all those creatives, or even anyone who feels like they just can’t speak up because of the hierarchy. The show is for those who want change and are willing to do something about it. To not be dormant about their life anymore.

Jake: Tell us about dodgy landlords, dodgy auditions and dodgy boyfriends. What makes each of them dodgy for Frankie and what’s her response to it?

Cláudia: Frankie has grown up with the idea of the ‘struggling actor’. She has read all the biographies and has romanticised the way of the ‘struggling actor’. She wants the hardships, because success will feel so much sweeter. What she doesn’t realise is that, reading about someone sleeping on a park bench before ‘making it’ isn’t the same as actually sleeping on a park bench, and not ‘making it’.

She is a dreamer who will happily walk around singing in the hope that Simon Cowell drives past, stops traffic and signs her right there and then (yes, she has seen too many rom-coms). Same goes for dodgy boyfriends and landlords (sometimes they’re the same).

She wants the whole story – stolen looks, coy smiles, and that oh so sweet forbidden romance. The inexplicable attraction without actually ever saying a single word to one another. Passionate love, where you’re connected spiritually and emotionally. Their touch is electric and when having sex, you become one. Except, that in real life, the coy smiles and stolen looks are actually almost always by men who are deeply emotionally constipated.

She thinks they have feelings, but there’s no concrete proof of such thing. In reality, these wounded souls don’t say anything because they’re actually insanely boring. They’re not cool, aloof, yet irreversibly in love with her. They’re just humans with quite possibly some form of verbal constipation. I think for landlords and auditions, you just need to mention this to another actor who has moved to London in search of the ‘dream’ and they will understand.

From my own personalexperience, I was once offered a ‘room’ that was in fact someone’s couch in their living room. And if you think that’s bad, there was the hidden baby…

Cláudia: I am so very excited! I visit the Fringe every year, but this will be my first time as performer, and I’ve got a feeling it’s going to be the best year yet! I am happy to be a part of it, and that I’m bringing comedy to the audience. The narratives at the moment must always be about some form of struggle, and while I mention various current themes throughout the play, it all gears back to laughter.

After the last two years, I believe we all need a bit of lightness. I am also super excited to see a range of shows, and it’s beautiful to see so much new innovative work being created. I am very much looking forward to Headcase by Kristin Maccas and Locked In by Gabriella Giocomo and Company. It’s wonderful to see so many female performers and I’m glad to be part of that.

Jake: And what can the audience expect to feel after the show? How are you hoping they will engage?

Cláudia: I want the audience to come and help Frankie on her journey into adulthood. I know that a lot of us do wish there was an actual rule book to follow, instead of these ‘none’ rules we all seem to take as gospel. I am looking forward to this performance, because although I actually am irreversibly in love with female solo shows, I find that a lot of them still seem to centre about a male character and I didn’t want to do that.

It’s ingrained into us from a young age that one of the signs of success is to have a partner and that’s just not true. I invite the audience to join Frankie in finding peace when her sacred place (the toilet) looks to be heading for a sad ending – this is not what the adults told her, and it’s not what she has watched in the rom-coms. What happens when we’re face to face with our own insecurities?

Lastly, I want to mention the importance of having a great team behind you – especially when starting out. I was looking to initially do the whole show by myself, but luckily, I was advised against it and I am really thankful for that now. I want to mention my wonderful director Emily Ingram, who has really helped me to bring the show to life. She has understood my vision from the beginning and has been supportive throughout.

You can catch The Best Ideas Happen in the Toilet this coming August 14th-18th, every day at 18:15 in TheSpace Triplex – Studio. Tickets are available through the EdFringe Box Office.