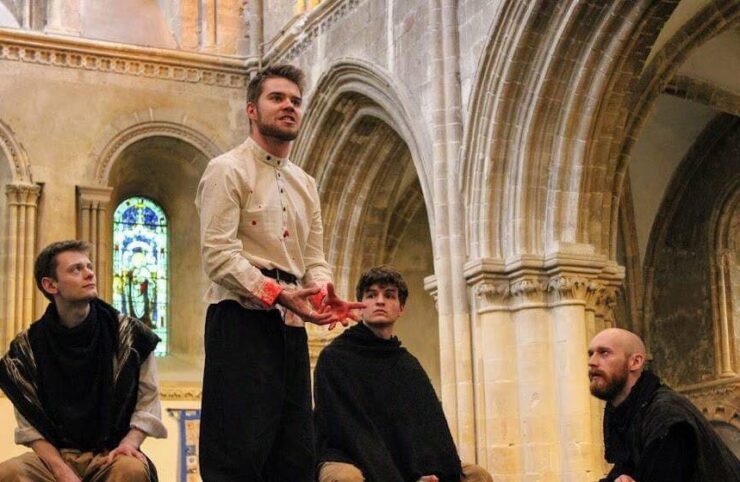 Ah yes, Shakespeare at the fringe. Always an interesting adventure for a punter, and the experience often goes one of two ways: Either you’ll walk away confused and uninspired, or be blown away by some new and innovative way of performing it. The whole ‘Shakespeare-with-a-twist’ genre can sometimes be a dangerous game for companies to play as a result of this, and especially fringe companies, who will have had to shorten the play considerably in order to fit into one act and still work. Having said that, it appears that This Is My Theatre took to the Scottish play and thought ‘Let’s make it more Scottish’ and my word, did it pay off.

I entered Preston Old Church, and took my seat to evaluate where I was sat. I was immediately hit by how beautiful my surroundings were, the church offered a tranquil atmosphere but, being aware of what happens in the story of Macbeth and the characters within it, it also came with a tinge of apprehension. It appeared that the witches had already made their arrival, sat in the performance area on an elevated platform singing in Gaelic. Simply marvellous. I was prepared for the singing, I knew that was going to be a part of the show before I arrived. But what I was not prepared for, was how fantastic and mesmerising the trio of Andy Colter, Simon Stallard and Matt Tweddle would be in their musical ability. Even when physically static their voices captivated the entire room. Thanks to these three, before the show had even really begun my respect and awe for this cast was already sky high.

Now no show is perfect, and it has to be said that this show did suffer from some minor issues. Although in some cases using the whole room and gangway provided great atmosphere in some scenes, in others I feel some scenes did suffer. Some stretches of dialogue that took place in the gangway led to some audience members having to strain themselves in order to see what was going on. I also noted some confusion in my colleagues as to when the actors changed from character to character and what significance it had. Being a general fan of the show I had no issue, but it did make me wonder how well the show tailors to audience members not in the know.

I want to take some time to compliment the cast as a whole, I’ve already mention the witches, but it would be foolish of me not to acknowledge the talent of Ethan Taylor, who embodied the title character with vigour and passion, especially in the characters final moments. The fight scene between the aforementioned and Stallard as Macduff was unquestionably one of the highlights of the show. It was wonderfully choreographed (well done to whoever was responsible for that) fantastically performed and the use of the gangway led to some very nervous looking audience members in this moment. I have to say that his delivery of “Is this a dagger…” was most impressive and immersive along with the casts movement around him. It was undoubtedly the best delivery of that monologue I have heard.

Eleanor Toms also impressed as Banquo but it has to be said her shining moment came as Lady Macbeth. Especially in the characters last few appearances. I always look forward to “out, damn spot” and the scene it takes place in productions of this show and I feel its a chance for whoever is played Lady Macbeth to really show an audience what she can do. She did not disappoint.

In short, this particular production of Macbeth chooses to void the typical approach for a more original and interesting interpretation. The atmosphere throughout was exceptional and all five actors are of star quality. I commend Sarah Slator for her work on such a memorable production. A must see for theatre fans and an education in how to make Shakespeare relevant again.

William Shakespeare’s Macbeth by This Is My Theatre will run until the 18th May at 19:30 daily, additional performances will take place at 23:30 on 17th and 18th May. Tickets are available from the Fringe Box Office.

INTERVIEW: A Digital Pint with… Sean Morley & Benjamin Alborough, reviving all of our ‘Terry Wogan Screams’ at VAULT Festival