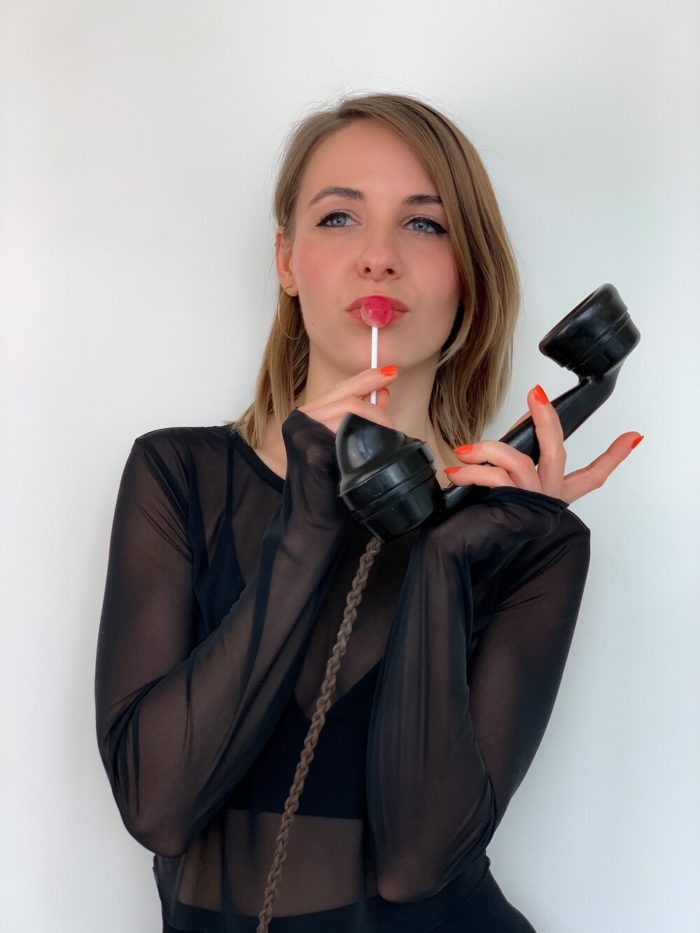 Jake: So Anna, our central focus for the show, Natalia, works on a sex line that mostly deals with older men who want the “young girlfriend experience”. Where did the idea for this come from and what made you want to explore it?

Anna: A few reasons, really. Firstly, Natalia’s Polish, like myself and there’s this stereotype for Eastern Europeans doing sex work, but often illegal and degrading. I wanted to play around with that, make it something that empowers Nat instead, because it’s her choice and it puts her in control.

Another reason, the term “daddy issues” is often being used – unrightly – as an offensive term towards women who had complicated relationships with their fathers, therefore are thought to be easy, desperate, often looking for older partners to fill the “daddy” void. I thought if a sex line like this existed, it would probably appeal to quite a lot of men who want to escape into the fantasy of young women wanting them for all sorts of reasons, comedic and not.

It all creates quite a good field to play and discuss the origins of the term “daddy issues”, the father-daughter relationships of all sorts, often neglectful, abusive or traumatic, that have an impact on our lives as adults and how often it’s on the children to work through their parent’s choices, behaviours, actions in order to move past how these affect their lives.

Jake: As the show goes on we learn more about Natalia’s own relationship to men, intimacy and complicated relationships… eventually feeding into our relationship to childhood as adults. How do these things link together for you? How has it been exploring those topics in creating this show?

Anna: I’m not inventing the wheel saying that our childhood has a huge impact on who we are when we grow up. Most of our patterns of behaviours are rooted in the relationships with our primary caregivers. Maybe that’s why I say this show can be for everyone who has or ever had a parent (absent parents included), even if the relationship wasn’t traumatic at all or didn’t seem that way at a time. Emotional neglect can sometimes have nearly as big an impact as having a physically abusive parent, for example, even though “technically” nothing bad has ever happened.

Without giving too much away, Natalia’s at the point of her life where she seems to notice that a lot of her behaviours, relationship choices and coping mechanisms are just her reenacting parental dynamics.

It was definitely very interesting and fascinating to explore these topics while writing Daddy Issues. It is a subject that affects me personally, but I have also had a lot of conversations with people from all sorts of backgrounds and communities, gathered their stories (some of which made it to the show) and maybe the best conclusion will be a quote from Natalia: “if you have been raised by at least one f*cked up, absent or, in fact, seemingly ‘perfect’ parent, chances are, you’re in the club, even if you live in denial”.

Let’s just remember it’s a dark comedy and hopefully the audience will find moments of laughter in it! I think making light of our darkness can be very healing and build self-awareness.

Jake: Now that we’re gearing up for Fringe season, what are you most excited for?​

Anna: Being a part of it! It’s not only my Fringe debut, I have never even been to the festival as an audience member! So I can’t wait to see all the shows – my biggest fear is that I won’t have time so see everything I want to see! I’m really glad that the festival seems to be back in full speed after the pandemic though, the more shows, the better!

Jake: Fitting with the themes of our magazine, if your show was an alcoholic beverage what would it be?

Anna: As a Polish immigrant I should probably say a shot of vodka, right? But let’s go for a Boilermaker, you think you’re getting just a pint of beer, but then there’s a punchy surprise on the side when you least expect it. Let’s make the shot a shot of vodka though. Obviously. And a Polish one at that!

You can catch Daddy Issues at this coming EdFringe August 3rd-7th, 9th-16th, 18th-21st and 23-29th at 11.35, in the Pleasance Courtyard – Bunker Three. Tickets are available through the EdFringe Box Office.