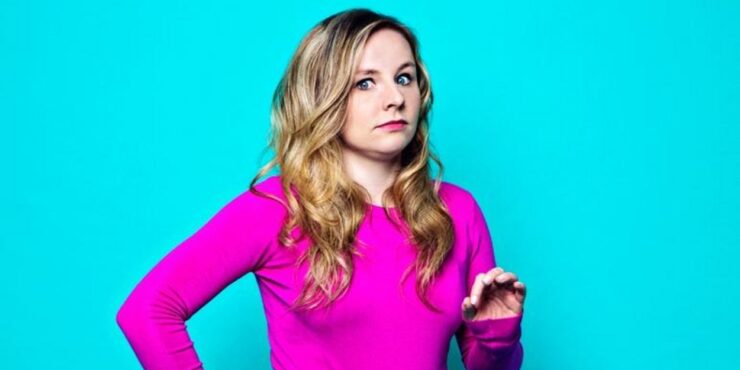 Today we’re joined for a pixelated pint by Sasha Ellen, the comedian asking important questions this EdFringe – Why can’t men and women be on the same team? Is it because of men with vans called Barry? Is because of killer sex robots, or it is it because of sambuca? Or all of the above? Sasha’s show Creeps and Geeks is taking all those questions on, but can we get any sneak peeks? Let’s sit down at the Binge Fringe Virtual Pub to find out!

Jake: Hi Sasha, now your show takes a comedic spin on the serious topic of women’s safety on nights out. You mention that you know the dangers all too well – how was it utilising that experience to find comedy?

Sasha: I think most of us kinda write what we know, which I guess is why you get so much whimsical, playful stand-up about some dark topics. I was writing what I know and I ended up thinking a lot about women’s safety and whimsifying my fears and those of my friends because it can be very comforting to laugh at the scary thing.

I also think we’ve grown to accept certain dangers as a given, like something unchangeable, when it comes to women’s safety. I think it was Eddie Izzard who called comedy an “attacking tool”, a way to challenge a preconceived idea. If we can laugh at this, we can look at it in a different way. I guess I’ve just chosen to do this through jokes about men with vans, sambuca and sex robots.

Jake: You mention the language around fear is a central part of the show – how does fear fit in to our analysis of inappropriate behaviour on nights out?

Sasha: Ideally, anything that causes fear should be deemed inappropriate behaviour. Don’t freak out the lady. It sounds like a simple rule, doesn’t it? And yet… If we could empathise with other people’s fears better, we’d find it easier to understand what is and isn’t appropriate. I think there’s some stuff that we’re universally afraid of. The news, the zombie apocalypse, giant seagulls. The last one could just be me.

Jake: Do you come to any conclusions about creeps and geeks during your show? Can you give us a sneak peek?

Sasha: Ah, the ending of my stand-up show. Ok, well no spoilers but I don’t come out as pro-creeps. Am I pro-geeks? Come and find out.

Jake: Now we’re gearing up for Fringe season, what are you most excited for?

Sasha: I’m pretty psyched for all things Fringe. It’s been 3 years since we’ve had the full shebang; I’ve missed it a lot and I have vowed to appreciate this comedian summer camp this year. But if I had to narrow it down it’d be infinite things to do, the city and Mac and cheese pies.

Jake: Fitting with the themes of our magazine, if your show was an alcoholic beverage, what would it be?

Sasha: A whiskey sour. Refreshing, with a kick and a cherry on top.

Sasha Ellen: Creeps and Geeks is taking to the stage at Underbelly, Bristo Square, Daisy, every day between August 3rd and 15th, and then again from August 17th to 29th at 16:15. Tickets are available through the EdFringe Box Office.