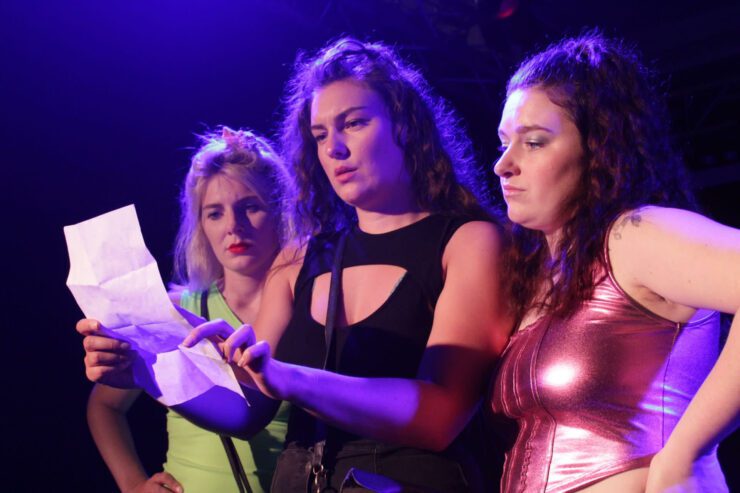 The links between VAULT Festival and EdFringe go back many a year, with shows often using the other as a springboard for touring and bringing the show to each other’s cities. Never have the links between Edinburgh and London been clearer than in Pretty Knickers Productions’ upcoming show Salamander, which is heading to VAULT 23 after a sellout run in their home city of Edinburgh. The show tackles the murder of a sex worker in the Leith neighbourhood in the 1980s and the ensuing relationship between sex workers and the police. With a women-led perspective, the company are looking to “make heroines of the underrepresented” in Salamander, so we caught up with them for a pixelated pint to chat all things VAULT, Fringe, true crime, sex work, and Crabbies Ginger Beer.

Hey guys! How was Edinburgh Fringe 2022 for you, and what have you been up to since then?

“Edinburgh Fringe 2022 was an incredible experience for us. We were overwhelmed by the reactions to the show, both from our audience and in the press and we were absolutely delighted to sell out! One of our biggest apprehensions going into the Fringe was tackling a story that is inspired by true events and to get positive feedback from people who were actually involved in the real story was fantastic. Since the Fringe, we’ve been back to the day jobs but have always been on the look out for more opportunities for Salamander – we can’t wait to bring it to Vault this month!”

You’re bringing Salamander to VAULT 23 – tell us about creating a show about the story of the murder of a sex worker in Leith, and how you built a multi-disciplinary, comedic, musical and spoken word piece about that story.

“The play was born from an episode of an American podcast called Small Town Dicks. The episode ‘Left For Dead’ tells the true story of the unsolved murder of sex worker Sheila Anderson in Leith in 1983. One of the most interesting elements of the story was the way this tragic event changed the police’s relationship with sex workers so we started by imagining what those conversations would look like. We wanted the play to honour the women who worked as sex workers in the 80s and from our research, we were constantly being told about their sense of humour and mischief so the comedic elements of the play came really easily – we certainly didn’t want this to be an out and out tragedy but reflect the gutsy nature of the women.”

“Also from our research, we learnt that Sheila Anderson liked poetry. Our co-writer Mhairi McCall is a spoken word poet so we wanted to look into incorporating poetry in a way that felt appropriate to the story. In the play, a character who has been failed by the care system, who harnesses real talent, begins writing and is able to use this as a tool to express the harsh reality of her life.”

How does it feel to be bringing such a hyper-localised Leith story down to London? How do you hope audiences react to it?

“We’re excited about bringing the show to London. We see this story as universal. Sex workers are mistreated and misrepresented across the globe, they were in the 80s and they are today. ‘Salamander’ reflects the human side of the sex industry and the characters should feel relatable – we want people to walk away thinking, ‘they could be my pals’. We really hope people connect with the story and it contributes in a small way to an already important conversation about sex workers rights today.”

How has the situation and relationship between Sex Workers and the Police changed in the Leith community today?

“We’d like to highlight that the show’s development coincided with Edinburgh council’s plans to ban strip clubs in the city. This made the story feel all the more important to tell as it highlighted how little has changed in 40 years. In some ways, Police Scotland’s approach to sex work in the 80s was more progressive than today as they took a hands on approach to interacting with the women on the streets. By pushing sex work underground, there is a real and genuine risk to the safety of the women involved.”

“The thing we’re most excited about VAULT is bringing this story to a new audience. The Edinburgh audience really connected with the story so it will be fascinating to see how a London audience react in comparison. We are also so excited to be amongst other incredible new plays at VAULT. It feels like a huge achievement just to be performing there and the buzz around the festival is huge. We’re lucky to live in Edinburgh as it makes performing at the Fringe so accessible but to travel down to London to do what we love will be incredibly exciting.”

“If Salamander was a drink, it would be Crabbies Ginger Beer. Leith born and bread, a bit of a spicy kick but with an overriding sweetness.”