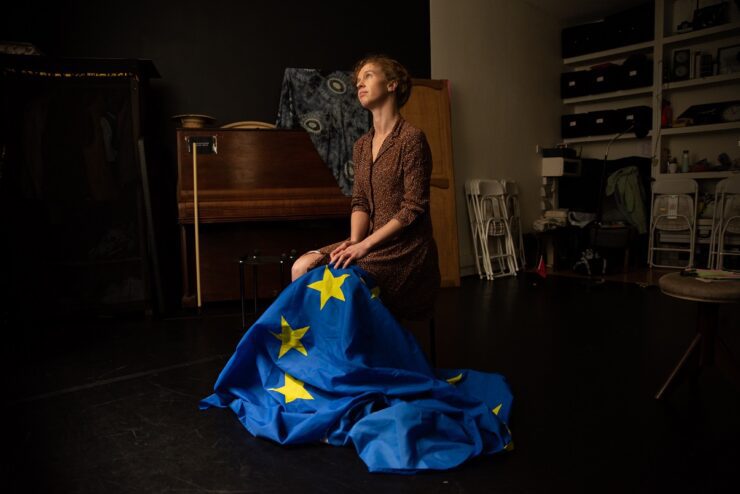 Tackling relationships, identity and nationality through the lens of a Jewish woman applying for a German Passport in the wake of Brexit… and all the while finding the funny side of that situation! Anna Clover is taking on a mammoth task in her new show Going Deutsch, debuting at VAULT Festival which is just around the corner. We sat down with Anna for a pixelated pint ahead of her show to talk diaspora, Deutsch-ness, generational trauma and break-ups. Check out this fascinating interview.

Hi Anna! We’ve heard that the inspiration for your show, Going Deutsch, has it’s origins in you being eligible for German citizenship as a descendant of victims of Nazi persecution. Tell us about how it feels to be bringing that story to the stage.

“As with much around my show, ‘its complicated’. When I first applied for my citizenship, I felt so smug to have a way in to holding an EU passport. However those feelings soon became mixed up with others that were not so good for casual pub brag, due to the trauma experienced by my family that lead to them losing their citizenships’ in the first place. Going Deutsch is my attempt to find the nuance and the place those feelings can exist together, in myself and also geographically! I am really excited to be able to share these complicated feelings with an audience, but I also feel anxious about sharing my Jewish-ness on stage. Its exposing. Having said that,  this is a fun and joyful show and I really can’t wait to live out some fantasies in front an audience and hear what they think and their respond to how complicated it all can feel.”

How does the story of German citizenship link to an understanding of relationships, and what can we learn about relationships from both your family’s reaction to your new passport and your friends’ reaction to suggesting getting back with your ex?

“Well, just like feelings, relationships are complicated! We take risks in relationships. We don’t know what the future holds. And we take an even bigger risk whenever we return to someone that’s hurt us before. As Einstein (whose parents are incidentally buried next to my great grandparents in the Jewish cemetery in Laupheim) famously said, ‘Insanity is doing the same thing over and over and expecting different results’.  But we’ve all been there, right? Well, at least I have. You love someone so much, and even though you remember how they hurt you in the past, you want to believe they’ve changed and this time it might be different. “

“If Germany is the apologetic ex, many members of my family do not believe the chance of change is high enough to risk getting back into that bed, regardless of if that bed is in the EU or not. But my friends, who don’t have direct experiences of my relationship with Germany, think this is an opportunity too good to miss. They have been charmed. But ultimately only I can decide if committing to Germany is right for me.  As a child of a diaspora, you grow up with an understanding that relationships aren’t long term, but we seek commitment and belonging and safety in relationships, even though our direct experience is that none of its guaranteed.  This is the central theme, in Going Deutsch.”

Tell us a little more about the devising process of taking those nuggets of inspiration to a theatrical level – how was it for you creating something so personal and how did it inspire your process?

“I have a brilliant director Liz Guterbock who has a similar background to me. We met through improv comedy and so we spent a lot of  the early devising time improvising around the situation, performing these dates with Germany and with real exes (what would I say to them if they suggested we get back together) and seeing what came up.  It was really fun to map the real life date and break up moments to those in the show.”

“There were also some objects and some visuals that felt imperative I explore how to include. Haribo was a significant part of my journey to citizenship so that felt key, which lead me to playing with the house of sweets in Hansel and Gretel, a German fairy tale about being chucked out of your home. Hansel and Gretel used stones to find their way back and stones are symbolically really significant to Jewish mourning. And then I couldn’t stop thinking about those yellow stars on the EU flag… “

What can the audience expect coming in to hear your story and how you’ve taken it to the stage?

“Going Deutsch is a comedy….and it’s fun to perform and watch! The subject matter is heavy at points, trauma and murder and genocide are not ignored. But this is a show about survival, about finding your community and joy and building it around you, wherever you find yourself.  Think dashing to the loos with your friends on an emotional night out for regular debriefs and gossip and help deciding what to do. “

“I am really excited to take the show to a broader audience and to perform it now its in my bones. I love the atmosphere of Vaults. Whenever I go as an audience member, I seek out one show to take a chance on for every ticket I buy to a show I have heard about. This way I have had some brilliant, surprising theatrical experiences. I really hope that Vaults will bring Going Deutsch to audiences who connect to the subject matter, as Jewish people; as the descendants of refugees; as duel citizens;  as people with dodgy exes! But also, that people who think they have no connection to the material stumble on it and it gives them a great experience.”

Fitting with the themes of our magazine, if your show was an alcoholic beverage (think cocktails, shots, beers, be creative!) what would it be?

“Well I’ve only just celebrated my third German birthday, so it probably should be water, but obviously zhuzh up in a soda stream….get back to me in 15 years we can share a Stein then!”