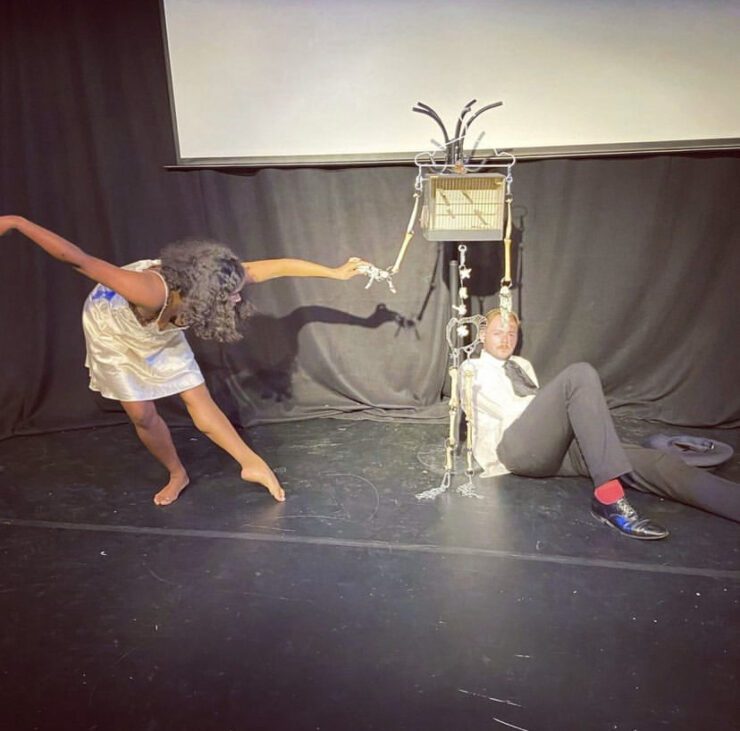 (This is littered with spoilers. Read at your own risk. Just whatever you do, go see the show.)

The Worst Thing You Could Do should come with a hazardous warning of the highest degree. Kuenzler’s words sever with a casual brutality that has you replaying obscene moral conundrums over breakfast. Unafraid to confront themes of brutality and femininity dead on, Dead Cat Theatre Co. takes no prisoners with this piece, and I was no exception.

The trilogy consists of three short plays performed by Jon Berry and Stephanie Burrell, written by Lily Kuenzler. The writing is nothing short of genius, translated through intriguing direction choices that scream the Theatre of the Grotesque. Aided by simple but effective staging and lighting choices, it makes for a great watch.

The tension enveloped the audience from the first step into the theatre. Instantly, we were greeted by Jon Berry’s cobra-like stillness; he commands the stage with a level of control reminiscent of a time bomb. I don’t usually enjoy a lone sitting actor staring into space, for it often conjures memories of my final GCSE drama piece. But, aided by Sam Bancroft’s eerily electronic, carnivalesque soundtrack and a blackout lasting slightly too long, the crowd feared what could happen in the dark and, more so, what you were about to witness in Alex Jacob’s cleverly choreographed lighting. The choices were clearly considered to create cohesion between the soundtrack’s composition and the piece’s direction.

Berry’s disarming quiet is interrupted by a young girl selling cardboard. This bizarre choice sets the tone of the first play with a smearing of bleak humour that appears synonymous with Kuenzler’s style. Stephanie Burrell barrels in with the life Barry’s Ed seems phobic towards. Together, the two actors explore the logic that once you have done the worst thing you can think of, then at least it’s been done, and it can’t get any worse. The audience’s expectations are toyed about in a cat and mouse exchange throughout. The comparison Kuenzler asks the audience to make is so mad – it’s sheer brilliance!

Anything you thought was going to happen doesn’t. It gets far worse than you could imagine. Kuenzler’s writing creates a stomach-turning tension where the audience fears just how far she will go. I did not doubt that I could be about to witness acts resembling the inside of an abattoir. However, she walks the audience to the executioner and leaves them guessing with a quip about a mixed spice pack. Classic.

The second play, Angela, sees Berry take to the forefront. The tone is of Victoria Wood’s Barry and Freda, except Freda has now been replaced by a cooking pot. It follows a grieving husband talking to a dead wife. Sounds sweet, but it really isn’t. We watch as the husband stuffs mince into tights, discussing Christmas plans with the children and regrets about a trip to Santorini. This stark contrast of dialogue about the mundane versus the gruesome imagery is brilliant.

The setting was particularly effective, with an empty chair beside him and a foreboding handbag on his other side, bringing thoughts of the Box Scene from David Fincher’s Se7vn. Kuenzler explores a twisted perspective of how women are seen, particularly as they age and notably when they die, asking the question, are we all seen as just bags of meat with balloon heads adorned in cheap lingerie and a red lippy?

The sexualisation of “Angela” was particularly uncomfortable. I won’t say too much, but… the sentiment of the scene dissipates with increasing eroticism, so intense it deserves a place on the Dark Web. It is equally saddening and disturbing, a real example of Berry’s acting greatness. He launches from zero to a hundred with pinball-like ease. Angela has the same effect as a road accident, you don’t want to watch, yet you can’t look away.

Kuenzler’s third play explores life inside a broken marriage and the sick emancipation of a miserable wife, using predominantly physical theatre and prop manipulation exceptionally effectively. Berry narrates the piece in the style of a Victorian professor intent on educating his audience in the ‘ways of a woman’, whilst Burrell convulses like an animal in submission at his feet. Sam Bancroft’s score feels like an additional character, acting as a hauntingly beautiful confidant for both forms of woman, both alive and inanimate. The play feels like a poison to the antidotal properties of the work of Oscar Wilde in its simplistic, derogatory views of wives and women.

Stephanie Burrell is a powerhouse of physical storytelling throughout the last piece. Her suppressed emotions scream through the lines of her limbs. The difference between the broken puppet-like physicality she starts the piece with versus the strength she dances with as she finds macabre freedom is monumental. She elevates and expresses through impressive leaps and turns, her chest exploding with the force of a million butterflies. I’m curious to see how the physicality would be affected by a larger venue; it seems at times a little too limiting for Burrell’s space engulfing talent. Generally, it would be interesting to see how physical theatre could be integrated further. But that’s only if I’m trying hard to find something to improve. Truthfully, I want each piece to be longer but that feels masochistic to type.

The Worst Thing You Could Do lures you into a false sense of security and gets you right between the eyes. With the fantastic script and direction paired with the stellar performances of Berry and Burrell, the show is an undeniable five stars. The trilogy of plays poisons your brain with intrusive thoughts so violent you’re left fearing the consequences of your next social interaction. The Worst Thing You Could Do, is not to see this show.

Recommended Drink: A luke-warm can of Fosters laced with Arsenic. Disarmingly humourous and straight-up deadly. Don’t forget the spring rolls to share!

Catch The Worst Thing You Could Do whilst you can at Greenside, Infirmary Street – Olive Studio, at 16:20 until August 13th. Tickets are available through the EdFringe Box Office.