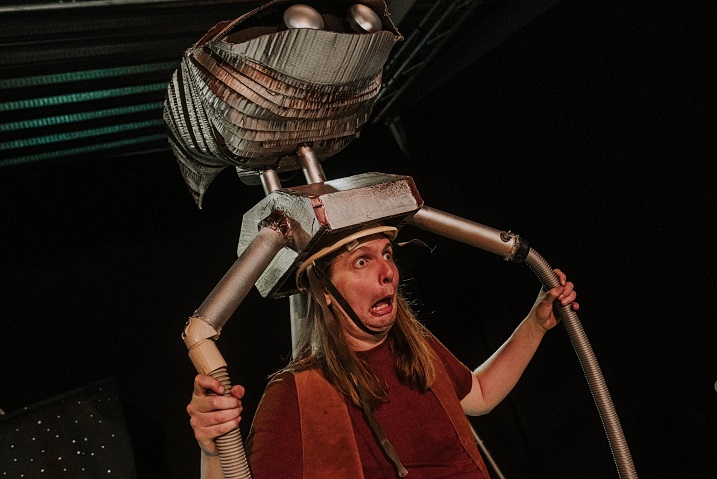 War of the Worlds (On a Budget) is an absolute riot – it must be said to start off. The concept is explained neatly in the name (a rarity for an EdFringe show) and you’ll go in getting precisely what you expect. It is 55 minutes of raucous, silly, rambunctious fun. Lamphouse Theatre have put together a fourth-wall breaking deconstruction of an H.G Wells classic, taking a fun and feminist spin on his writing and offering live songs, looped sound effects and goofy prop-costumes for your pleasure.

It is often the case that the ‘Play that Goes Wrong’ trope comes across as a little smug and self-important. Luckily, performers Tom Fox and Becky Owen-Fisher are so damn likeable that the whole thing feels like a performance in your living room from two of your tipsy pals. Fox is at the heart of the piece, antagonised by Owen-Fisher from the tech desk in a way which collapses all illusion and centres you on the piece’s take on Wells’ work, rather than on immersion.

This format works well and the aesthetic goes along to match it. It is very clear that the show creators had a lot of fun thinking of ideas to create practical effects on stage that are fully of whimsy and lightness. From a toilet seat headpiece made to look like Mars, to a bike helmet Cruise Ship submerged in disaster, and a bog roll spaceship descending on Earth – every moment is crafted and often more cleverly than you think. It’s so ridiculous that it invokes belly laughter just by appearance alone.

The songs, mostly delivered by Fox both straight and in falsetto, are true story moments rather than accompaniments to the plot. The audience are dragged unwillingly into the show, with Fox taking a moment to name his ‘strong female character’ after the first woman audience member he caught eyes with. Much like in a disaster film, nobody is safe and everything is up in the air. Most importantly, the participation is never uncomfortable, instead it draws you closer to the performers in a loveable way.

All that Lamphouse Theatre need to be careful of is that the “We’ve made everything ourselves on a shoestring” joke can only stretch so far. It becomes a little overbearing in a section down the middle where the performers reset the stage and completely drop the act – it is important that Fringe shows be concise and neat, else they risk disowning the audience midway through.

There is bags of potential here. War of the Worlds (On a Budget) is a fresh take on the performance-gone-awry genre, the prop-costumes are a stunning success and the design of the whole thing is so darn funny. Whimsical and slipshod with a light touch – I guarantee you’ll leave with a beaming smile on your face.

Recommended Drink: Grab yourself a Burgundy Wine and head down to Marble Arch to catch yourself before the Bechdel Test does (see the show, you’ll get what I mean).

Catch War of the Worlds (On a Budget) before the Alien Heatray dissolves you at TheSpace @ Surgeons Hall, Haldane Theatre, between August 6th and 27th (not the 14th) at various times in the late morning/early afternoon. Tickets are available through the EdFringe Box Office.