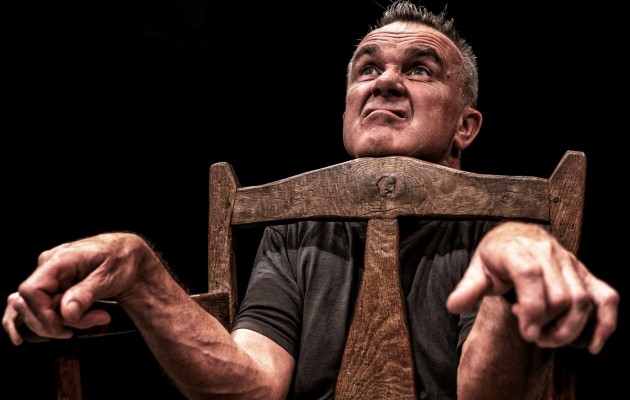 One actor. Five Acts. Eighty minutes. Fifteen plus characters. One of Shakespeare’s most famous tragedies. I’ll be honest, on face value I couldn’t help but thinking: “this could go either way”.

The play begins; high pitched male singing can be heard from within the audience; now I’m thinking: “This isn’t the King Lear I know” and I can confirm it was nothing like what I was expecting. Paul Morel emerges and takes his place centre stage. He introduces himself as “Shakespeare’s Fool”, suddenly I get it. This is not just a one man version of King Lear, this is a comical retelling of an old story from the point of view of a character who is known for his physicality and humour. Not only that but the fool actively demolishes the forth wall and engages with the audience, keeping everything lively and upbeat in the process.

Paul Morel is no question, a fierce talent. His comedic timing is spot on his physicality in all characters, from the beautiful Regan to the shrunken King of France to the title character himself. It doesn’t matter if the characters are male or female; young or old; royalty or otherwise; each character is played to perfection, often being humorously characterised but never garishly over exaggerated. He is also never afraid to poke fun at the show itself. Highlighting the certain unusual and nonsensical plot points that I’m sure many have just accepted as ‘classic Shakespeare’.

The audience were having a great time throughout. The glorious thing about the structure of the show is that it leaves room for Morel to feel the energy in the room and interact accordingly, modifying certain sections for the audience. Dividing the audience for the French vs English battle towards the end proved to be a huge hit, with additional puppetry using drum sticks for Edmund and Edgar’s final duel.

With the addition of the odd song here and there this show had a warm and inviting atmosphere. It was like we (‘we’ being the audience) were all at the pub together and our slightly tipsy dad was telling everyone a story. A story in which he plays all the characters and does all the voices and clearly has a great time doing it. Honestly, there’s very little for me to say, I had a great time. A hilarious and fantastic evening.