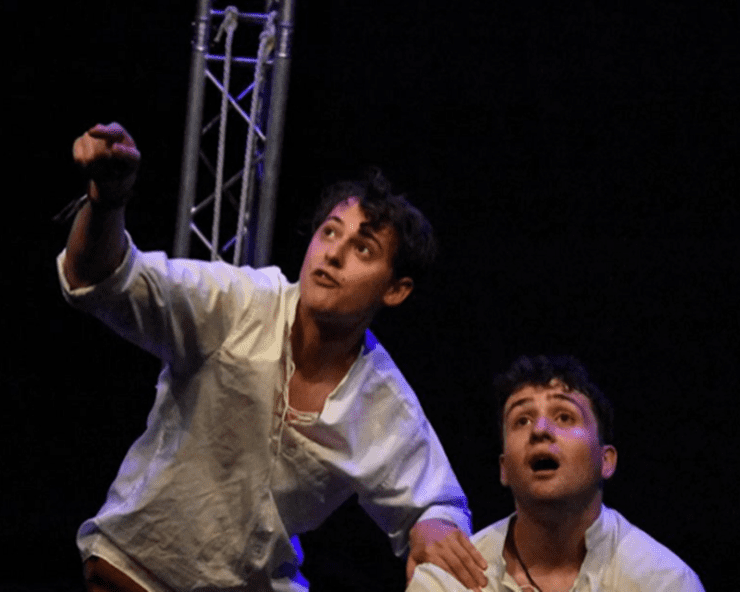 Vignettes from the shipwreck of the Batavia are the central offering of The Graveyard, tackling isolation, abandonment and stir-craziness in this dizzying, sometimes absurd piece. The Batavia wrecked in 1629, leaving its sailors marooned on a bleak coral spit in the Southern Indian Ocean. The Graveyard is part horror, part thriller and part historical documentary, unearthing ripples in the human psyche with fervour and fight.

What is morality without civilisation? This question sits at the heart of the story of two characters caught in a reign of terror by a charismatic Apothecary who seizes the chance to rule over a community of the desperate, who fear being captured and eaten by the Indigenous population. It asks the question which has been on the lips of every person whose heard about the size of the spiders in the Antipodes – is Australia actually the seventh level of hell?

Hans and another unnamed character are our focus. The piece is discontinuous chronologically, presenting snapshots of the characters from the moment of realisation that their ship will wreck up to committing violent murders in the name of an enigmatic cult leader. They make ominous reference to the crimes and eventual hanging of their overlord, who undertakes a bloody reign of terror on the survivors.

Our characters are presented continually with moral dilemmas and the biological extremes of human survival. Whether hallucinating after days without water in the desert or confronting the reality of dumping a man to die on the shores of the island, we witness a slow descent into madness which is made all the more rigorous by the out-of-order nature of the vignettes.

The performances from Harry Higgins and Charlie Flynn are electric at their highest and somewhat sedentary at their lowest – that’s not a negative here though. Higgins’ Hans keeps us, and his fellow survivors, at arm’s length with constant sarcasm and never really breaks his facade down. Perhaps this is why he is such a credible survivor? It takes someone with a stone-cold attitude to their own mortality to survive in the most extreme environments.

Flynn’s character is far more fretful and fractious, desperate to learn how to survive but unable to discard his in-built moral barometer nor his sense of duty. His character never truly succumbs to the reality of the world around him, instead he clings onto hope of returning home and the superior rank he is accustomed to. The breakdown of civilisation in the face of nature is truly on show, and both characters provide balance in how humanity reacts to that degradation.

One question to be discussed here is the presentation of Indigenous people – it is perhaps true to the time that Hans and his crewmate would view them simply as cannibals. There is a lightly nuanced discussion here, Hans comments on how they are culturally distant. This is useful comparative to viewing them in light of savagery. Overall, the conversation surrounding Aboriginal People in this piece isn’t very deep, but the piece is instead focused on those who were dumped ashore from Europe.

At its shining best, The Graveyard offers a fantastic insight into the deconstruction of the human mind. It’s a refreshed take on the marooned sailor complex, witty when it needs to be and philosophical at its heart. Fresh, twisted and cruel – The Graveyard is a moral landmine waiting to go off.

Recommended Drink: The Graveyard is a can of Fosters left out in the desert to bubble and steam – inside is a foul liquid which would drive you stir crazy, outside is a silvery glisten that entices you in.

Catch The Graveyard before it maroons itselfevery day between August 6th-20th, except on the 14th, at 12:40 in Greenside @ Infirmary Street – Mint Studio. Tickets are available through the EdFringe Box Office.

INTERVIEW: A Digital Pint with… Andrew Mapperley & Bewlay Stanton, making us all ‘Desensitised’ at VAULT Festival