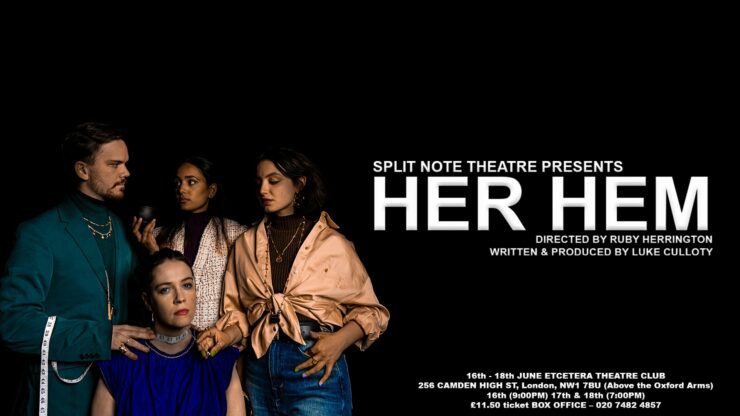 “My dad wanted things done right.”
“What is right? For you, for me, for this country?”

Her Hem does a lot of things right when discussing this heavy subject matter, while still leaving breathing room for improvements before it tackles the Edinburgh Fringe next year.

Her Hem by Split Note Theatre is an hour long comedy drama running until 18th June 2022 at the Etcetera Theatre Club above the Oxford Arms in Camden. Performed by four actors, the piece is set during the dress fitting for a controversial public figure. A prestigious designer and his assistant battle it out and weigh up whether it was worth taking the commission of this problematic client. With the press lying in wait outside the studio, as the events unfold we begin to see the repercussions of the dressmaker’s decision on his business, his staff and his relationships.

The writing tries very hard to subtly incorporate a number of social issues such as homophobia, racism, islamophobia, fatphobia and misogyny. Of course it is difficult to discuss all these with nuance in the short space of an hour, therefore at times it felt like an issue was picked up, played with and then dropped.

Despite the clever threading through of his “pain” in play it was hard to like Luke Culloty’s cutting performance of Oliver Sansree, meanwhile Nomi Bailey as Linda Jones played skillfully with our sympathies. Irina Anghel excellently played Maja Koska with wit and enthusiasm against the backdrop of Horeb Chohan’s mousy Claire Chopra.

The play was very funny in short bursts, and I look forward to seeing the actors settle into their roles a bit more and letting their natural chemistry provide us with a few more laughs. It was difficult to understand why some stylistic choices had been made, such as a short movement section used to transition between scenes and then never again. Music seemed to be begging to play a bigger role than it had, and I would have loved to see this explored more deeply.

Overall Her Hem must be applauded for its ambition and its honest attempt at tackling important social issues.

Recommended Drink: A Long Island Iced Tea is the drink to accompany this play: jam packed with ingredients akin to the way Her Hem is jam packed with relevant social commentary. Grab a drink at the Oxford Arms before heading upstairs to catch this topical play.

Catch Her Hem every night between 19:00 and 20:00 until the 18th June 2022 at the Etcetera Theatre Camden. Tickets are available through Citizen Ticket.

Holly studied English Literature and Drama at university and loves sinking her teeth into every kind of performance, however she reserves a special place in her heart for anything movement based from clowning to dance theatre.