A Digital Pint with… Wes Savick of Juvenilia, bringing Civilian Defence and pre-emptive panic to the stage at EdFringe 2022 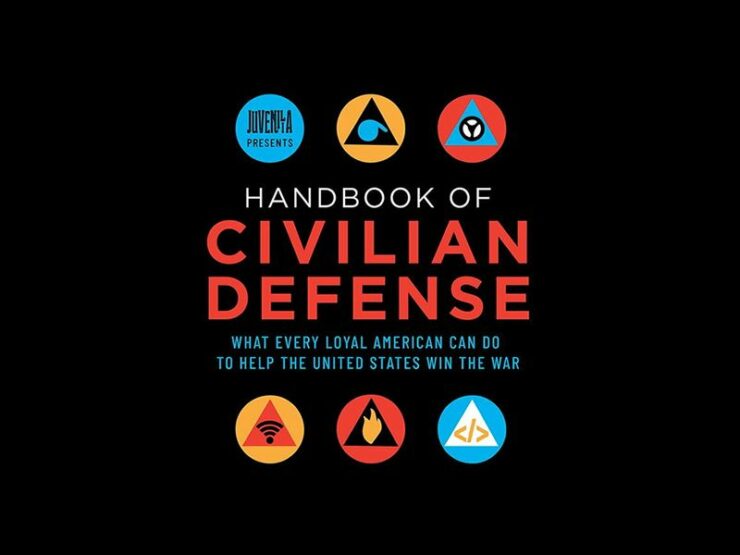 Duck and cover! The sirens are blaring but luckily, we’re locked into the Binge Fringe Pub with the knowledgeable Wes Savick. Wes is one of the brains at Juvenilia, who are behind Handbook of Civilian Defense (What Every Loyal American Can Do To Help The United States Win The War). The show is making it’s launch at EdFringe this coming August. Based on a 1942 document issued by the U.S Government, we sat down with Wes to ask what relevancy it might have to the modern world and the crises we face. Join us for a pixelated pint!

Jake: Welcome Wes! So your show is a word-for-word adaptation of a 1942 U.S government handbook to prepare families for uncertainty and violence. Where did the idea come from and what relevance does it have today?

Wes: True Story: I visited my mother in Milwaukee last summer and saw the “Handbook of Civilian  Defense” on a side table. “What’s that,” I asked. “Found it in the basement. Want it?” I immediately knew that this is the perfect theatrical project for right now.

Published in Wisconsin (which is right in the middle of America and as far from either coast as you can get), the handbook was hastily produced and distributed to people like my grandparents (working-class second-generation immigrants who had survived the Great Depression) who were unprepared for the possibility of being directly touched by a conflict so far away. It was, in part, a tool of engagement for citizens who felt isolated from the threat.

The 1942 handbook is also a performative document. It prepared families for uncertainty and violence while simultaneously assuaging panic. The U.S. government needed to draft the civilian population into service. To accomplish this it was necessary to galvanize them through a prescriptive American identity and purpose as well as a kind of script which offered a wide spectrum of participatory roles. The subtitle of the handbook, “What Every Loyal American Can  Do To Help The United States Win The War,” has a bit of a Kubrick vibe to it which is both  ironic and entirely earnest.

In the current moment, the handbook describes an America which is nearly unrecognizable: The  new impulse to “win the war” feels much more closely related to 1861 than to 1942. And yet we  are at a similar moment in our national journey because things feel like they are on the verge of blowing up. The aftermath of January 6th is intensifying not dissipating. The war in Ukraine is a geo-political existential crisis. Mass shootings are skyrocketing in what is already the most violent society on Earth. Plus the planet is melting. We can afford to smile at the 1942 document because we take comfort in knowing how that turned out. But they didn’t have such  assurances in 1942. And, in terms of our own situation now, neither do we.

Our production plays a lot with perspective. We are watching a 2022 embodiment of a 1942 text  in order to understand both moments more clearly. If it’s true that comedy equals tragedy plus  time, the distance of history provides an opportunity for horror and humor, both. Additionally,  the richest encounters with history always involve the possibility for a glimpse into the future. History is prophetic and our production explores this in what I believe are surprising and  provocative theatrical ways.

Jake: You mention the show includes original music – how did that fit into the show’s development? What can the audience expect to hear?

Wes: I needed original music to create a space for a contemporary response to the word-for-word  fealty to the 1942 handbook as well as a contrast in tone…the possibility for joy. Every spoken word is from the handbook. Every sung word is new. The audience can expect to hear music inspired by Americana, from country to folk to gospel to tin pan alley. The music is directed straight to the heart of an audience which can feel several conflicting feelings at once.

Jake: Do you think it’s useful for society to “pre-empt panic”? What lessons have you learnt from adapting the handbook?

Wes: Tricky question! A society which successfully pre-empts panic may be a society which is in total denial of what’s actually going on. To that end, it is useful for a society to guard against complacency by renewing commitments to its highest aspirations. The handbook reminds us that  grievance alone cannot accomplish this.

There’s a phrase in the handbook which I think exemplifies its tone as well as the current moment: “There may be dark days ahead.” It’s a wonderful, simple, deeply expressive sentiment which sugarcoats nothing while still implying days beyond the dark ones.

Another uncomfortable lesson learned from time with the handbook: Monolithic government controlled propaganda in the U.S. helped the Allies win WWII and preserve democracy while the (seemingly) open platform of the internet is proliferating ignorance, intensifying violence and  alienation, and ultimately accelerating the fall of American democracy. Discuss!

Wes: My wife and I first attended the Fringe in 2019 and it felt like being reunited with the tribe I hadn’t realized I’d lost. It was honestly a kind of ecstatic religious experience…,The ultimate validation, an ocean of people, audiences and creators, drawn in a kind of collective faith to a sparkly star in the night sky. Extraordinary! The 2022 Fringe is a profound and poignantly affirming event and I am thrilled to be participating in it.

Jake: Fitting with the themes of our magazine, if your show was an alcoholic beverage, what would it be?

Wes: It’s that dicey moment when you say to the bartender, “Surprise me.” If the bartender succeeds, you can’t be disappointed and may even delight your palate with something unexpected and new. Always wise however to refrain from asking what’s in it.

Jake: And tell us about how you got to working with Juvenilia?

In addition to my ongoing freelance work, I am a full professor at Suffolk University in Boston. I am also the founding director of Juvenilia, a professional experimental theatre company in residence at Suffolk through the university’s generous and visionary support. In addition to creating original work which seeks to challenge the status quo, Juvenilia serves as a medium for our graduates to transition successfully into the professional theatre, to empower a process for collaborative devised theatre making, and to connect to a larger tradition and community of  avant-gardists. I am thrilled to be bringing Juvenilia to the world stage of the Fringe and hope it  is the first of many engagements.

Handbook of Civilian Defense (What Every Loyal American Can Do To Help The United States Win The War) lands at EdFringe on August 8th, playing until the 13th every night at 20:50. You can find it at Greenside @ Nicolson Square, Lime Studio. Tickets are available through the EdFringe Box Office.

For more information about Juvenilia, please go to https://sites.suffolk.edu/juvenilia/