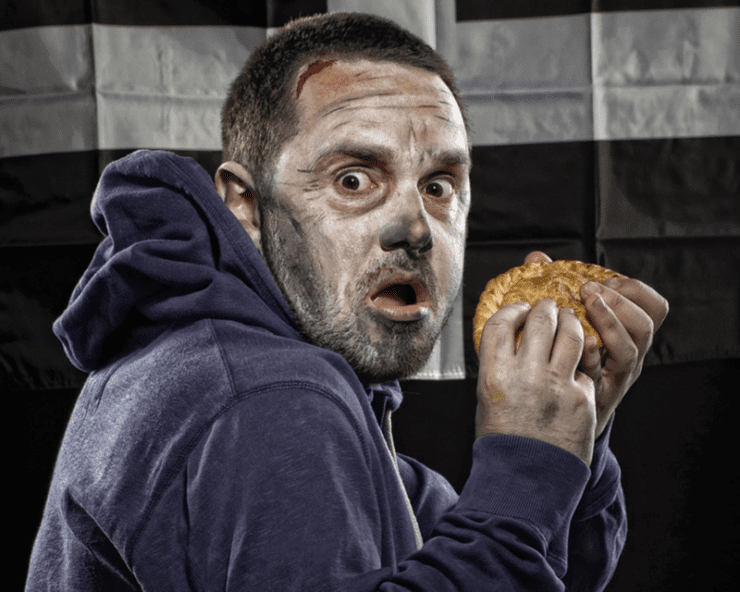 What’s that I see approaching the Binge Fringe Pub? Zombies! With… West Country regional accents? Now this I’ve gotta see! We’ve sat down with one of the undead for a pixelated pasty, made with brains and a sprinkling of devolution. You can check out Greg’s show Apocalypse Kernow on the EdFringe website.

Jake: So Greg, where did the idea to make a zombie comedy set in Cornwall come from? It’s quite a unique setting for an Apocalyptic story!

Greg: You forget it’s fairly apocalyptic on our doorstep all the time, I’m talking about Devon, of course. The houses tend to be more expensive there, why?

I wanted to write a show that incorporated my Cornwall, Liskeard, Callington, Tavistock (sorry that is in Devon) and the types of people there but in a way that would entertain an audience. Hence, a zombie apocalypse.

As for Cornwall, well, I’ve seen zombies in London, in rom coms, in Jane Austen country but never in Rick Stein’s fish and chip shop, on a fishing boat, in an already overcrowded Truro Hospital, in Aldi, at alcoholics anonymous, in a national trust tea shop, in Trago Mills, the more I thought about where I could set scenes in, the more I found my home was where I could write a very real social commentary and at the same time a completely absurd comedy. All of the above scenes are in the piece.

Jake: I’ve been reading that while there’s a lot of comedy in the show, you’re also tackling some quite serious social issues too – regional identity, social commentary on rights – how does it all fit together for you?

Greg: The notion of human rights is at the heart of the piece and I hope the piece generates discussion over how far we take that notion of rights. The zombies get rights as campaigners argue that killing zombies is murder. Soon, it’s illegal to kill zombies, and the correct term for zombies becomes brain addicts, which on one hand is very progressive and shows how far we’ve come as a society, yet on the other completely handcuffs the rest of society in terms of decision making. It’s done in a very comical way but beneath that this show really has something to say. The more absurd the show gets, the more real it becomes.

The show also features Cornish evacuees having to become refugees in Devon, yet having to pass a test to do so, the final test is having to make a cream tea the Devon way, which is of course, the wrong way. If you don’t understand the Devon/Cornwall regional stuff you might understand the view of London it takes, who dither over what to do about Cornwall until infection comes a little more Easterly.

Jake: What sort of process did you go through to develop the show?

Greg: I wrote the show with a view to being a kind of sketch show with many actors before the first pandemic. During the pandemic, I morphed it into a one-man radio show with me playing all the parts and putting out short episodes on YouTube every day, to make the most of being at home.

When I was doing that I made one or two episodes with video, but as I’m OMF Theatre, with stands for ‘One Man Films’, I have to film and act in the scenes at the same time so I roped in some puppets to act as Boris Johnson and other characters in some scenes. They went down very well with the audience.

When some theatre outdoor spaces opened I took the play to the park in Stroud, and so from no stage we had a massive ‘stage’ and this performance earned the show on OnComm award nomination. The pace of the show is very fast as it moves like a sketch show from character to character so different stages, different venues have allowed it to morph. The outdoor version had more puppet work in than in its current iteration but then I’m not a good puppeteer, so it’s probably for the best. I’m excited to be putting it on at Paradise in the Vaults. Zombies in the Vault, it’s just sounds right.

Jake: You mention that there are parallels to the “current zombie apocalypse we’re going through” – what do you mean by that and how has it affected the show?

Greg: Well, Covid…and Brexit. The show was actually written before the first Pandemic, so when I was actually living through the script in real life, it was interesting to see how much I got right, and what I got wrong when such an event occurred. I got the lockdown, shopping frenzies, petrol crises, cost of living problems and the riots all pretty bang on. Other things, I was way off though it’s more accurate than most apocalyptic films have been. I have adapted the show since to make it more realistic, so expect the odd joke about toilet roll.

This will be my first fringe in Edinburgh. I’m excited for the whole thing, meeting new people. New people seeing the show. Excited to give some flyers. Knowing whether I can shake hands with pleased customers or just respectful nods. Excited to be bringing Cornwall to Edinburgh.

You can catch Apocalypse Kernow at Paradise in the Vault – The Vault, every day between August 22nd and 28th at 11.20. Tickets are available through the EdFringe Box Office.