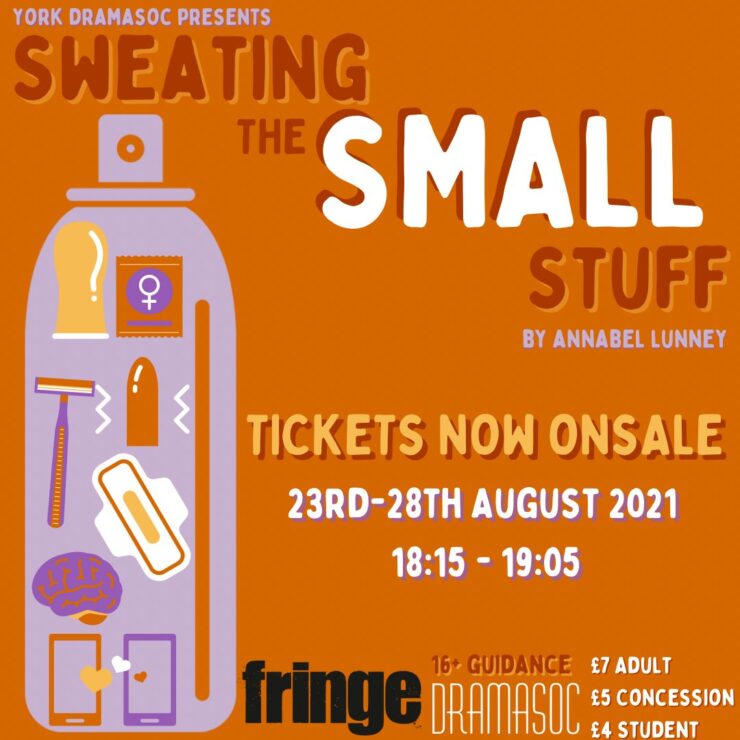 How does a show that aims to appraise and impact upon seven different rich and interesting problems manage to engage it’s audience without a story? Exactly how Sweating the Small Stuff does it, that’s how. Part PSA, part verbatim theatre, all irreverently entertaining, York Drama Soc have hit the nail on the head with this one.

Built on the experiences of anonymous submitters, this show addresses the things we’re told not to worry about. Annabel Lunney’s script wants to turn this ideas on it’s head and invite us to crack these problems open for consideration. The show is performed, at times presented, by an ensemble cast of five who fill in for multiple nameless characters compiling ideas together.

Sweating the Small Stuff is not afraid to talk in frank terms. Sections dealing with intimate details of the body clearly unnerved some members of the audience. I feel this is part of the aspiration that the show authors have, and you can probably measure it’s success by that metric. This is not a show that will sit well with everyone and that is a good thing. Speaking so openly and explaining so clearly what your show hopes to achieve is rare, but subtlety and nuance need not apply when your production quality is so high.

Speaking of that production quality, a real triumph of this show is it’s production design. Sound designer Tal Goldstein has put together a thoroughly complimentary and involving soundscape which plays throughout the piece. Similarly, Senah Tuma’s costume design evokes educational videos through the use of block, primary colours. All of it creates a thoroughly uniform piece.

At the start of the piece performer Tom Spencer asks us why we’re always feeling overwhelmed, and can we ever be just “whelmed”? The ending of the show blasts continual topics at you to ensure you’re getting the message. All York Drama Soc need to be careful of here is that they don’t venture into overwhelming their audience to the point that they walk out the door feeling muddled. Or perhaps that’s the point that I’m missing.

The use of levels throughout the piece is consistently interesting, though it does sometimes feel as though the show could do with some chairs. The layout of the Jenner Theatre and it’s lack of raked seating doesn’t allow for much of the audience to see the sections where the performers are sat on the edge of the stage.

All in all, the show is consistently engaging, providing a nuanced take on it’s topics that will delight some and make others squirm in their seats. The performances are fantastic, central to the show’s success, and it all around manages to avoid being preachy. Fierce, full of character and vivid in it’s audacity. Be sure to catch Sweating the Small Stuff before it drips away and leaves you with just an armpit stain.

You can watch Sweating the Small Stuff at 6.15pm at the Jenner Theatre, TheSpaceTriplex until August 28th. Tickets are available through the EdFringe Box Office.