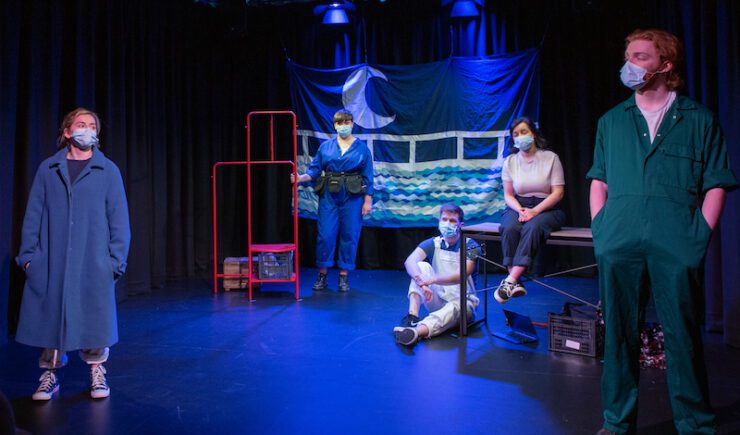 Central to the set of Moonlight on Leith is a large tapestry of the moon overlooking the ocean. This is apt, as in many ways the show acts as a tapestry of interwoven stories and fragments from the neighbourhood. True to life – the stories do not all intercept one another but some do, they are simply linked by the notion of Leith and it’s heritage as both a backdrop and a base.

The five performers who interweave the stories into one piece are all dressed in boiler suits and dungarees, which are varyingly used to present different characters. The narration is crafted poetically and to hit specific beats that lead into different story moments. Intermittently there are songs which are folky in nature and make use of some great harmonies.

The stories themselves range from protestors working on the Save Leith Walk movement to a middle aged couple suffering from a slump in their marriage and of course, more. Particularly enjoyable, as always, were the bigger and more humorous characters. An evident crowd favourite was Hank the philosophical cat with a French accent, fantasising of a life of liberty. Equally funny is the show’s satire of students, with an unforgettable line in “Will stop vaping when Tibet is Free” in describing a particular hipster.

The more socially engaged elements of the show were thoroughly well thought out. Particularly they make a convincing case against gentrification and housing developers knocking down sandstone tenements. Beyond just the political messages here however, the central vision is one of community. One of the more touching elements of the show was a pub landlady talking about making friends through leasing out the space above for free. Laila Noble and Emilie Robison’s script shines here in it’s sentimentality.

In regards to the performances, Andrew Govan-Hall’s presentation of the “Professional Protestor” and as Sgt. Ham are especially memorable. Ham is one of the more developed characters in the show, taking not just pride over his patch but also showing sensitivity to people he knows mean well. Nicola Alexander and Lucy Deehan’s pairing as two shady characters are a treat.

These, however, are simply the more memorable and provocative parts of this show. The real pleasure in watching this all play out is seeing each of the five slip and slide in and out of each character, or fit their mouths round the poetic and lyrical narration elements. The five prove themselves to be all-in for the whole show. Minor details I enjoyed sometimes popped up just from looking from someone “out of character” reacting to what was happening or sneaking a look at a prop on stage. You’d sit and wonder what was coming next, and from who, and this pace keeps you engaged the whole seventy five minute run time.

The question with presenting a piece in this tapestry form is how deep it goes. Except probably in the case of Ham and half a handful of other characters, we only see glimpses of each. In some cases this feels good and in others you’re left wanting a little bit more. Director Debi Pirie should be commended however for the scope of the show, which does well in painting a portrait of this part of the city.

Listening to some of the stories as someone who has long had family in Edinburgh, I remember hearing similar stories from my older relatives. Particularly as one character speaks about her mother working as a cashier and putting money up a chute, only to receive the change. These stories are put alongside the modern struggles of Leithers, facing gentrification and rising rents. It is a fantastic way to put together a show about a fastly changing community.

Sometimes serene, often punchy and never missing a beat – Moonlight on Leith captures a snapshot of a place that has never had just one fixed identity. Fittingly, the actors in the show never stick to one identity themselves. It is a truly stunning production with a lot to offer, whether you’re from Leith, London or Land’s End.

Recommended Drink: Go and get yourself that Strawberry Daiquiri from the bar around the corner, you deserve it.

Catch Moonlight on Leith at the Jenner Theatre, TheSpaceTriplex, August 21st, 23rd, 25th and 27th. Tickets are available through the EdFringe Box Office.