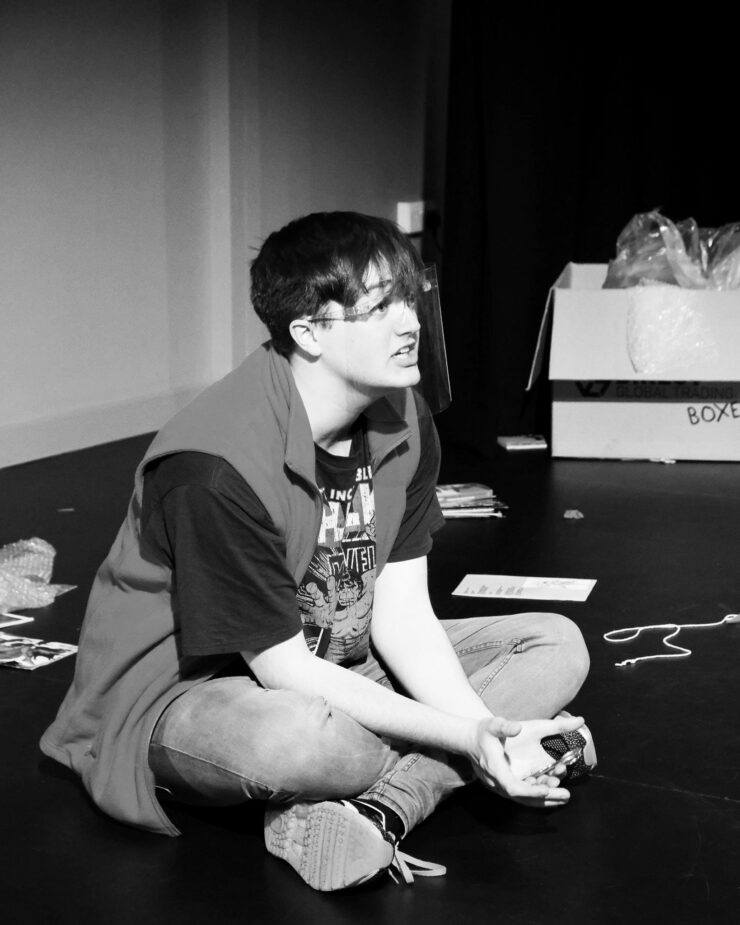 An ailing comic book shop in a small Scottish town is the setting for Saving Mr Ultimate. It’s also just about all that seventeen year old comic book geek Paul has left as a memory of his father besides a few issues of Mr Ultimate, written by him and his brother. We’ve arrived on closing day just as the shop is about to be sold off to PaddyPower. Paul is on a desperate mission to stop the closure. However, when brother Barry announces he’s leaving the country, Paul might end up with more than he bargained for.

Saving Mr. Ultimate is a show about memory. How do we attach ideas we have about people to things in the world? How do those attachments change our perceptions of the past and ourselves? On top of this, it also has a central question of escapism. Paul lives in an isolated universe with every other sentence needing to be a reference to comic books, something even he gets frustrated about midway through the story.

The discussion of suicide in John McEwan-Whyte’s script is one that centres around liberation. Paul’s frank nature in speaking about his father’s death shocks the other characters, especially his brother Barry and sister-in-law to-be Annabelle. This is one of the more instantly likeable elements of Paul’s character, who is clearly deeply affected by trauma. This discussion, early in the play, manages to reduce the taboo with the audience and eases them into the broader ideas and conversation that the script wants to get across.

The story is deeply heartbreaking and much of this comes down to the relationship between Paul, Barry and (later) Annabelle. Andrew Nimmo delivers a petulant, unknowing and deeply affected performance as Paul. The fact that his family shades him from the realities of his childhood builds onto this. The audience can’t help but feel sympathetic to him even if they aren’t entirely behind Paul in the decisions he makes throughout.

Charlie Devlin’s Barry is a standout performance. The script does well to put across the dilemma Barry faces, but Devlin himself manages to find his feet early in putting across how complicated Barry’s life has become. We learn that in some ways he is to blame for Paul’s inwardness and it’s hard to feel empathy with someone who is abandoning their seventeen year old brother across the world.

This show’s real strength is showing how messy and tiring family life can be, especially in the case where there has been a deep rooted trauma. Paul’s attachment to Mr. Ultimate is displayed towards the close of the show in a confrontation scene. The imagery in this particular scene (I won’t spoil it!) is breathtaking and powerful. Director André Agius should be congratulated for his imagination here in piecing together the show in a way which builds to this moment.

Some elements of the show lack in development, especially in the characters of Will and Liam. Scott Renwick should be praised for bringing some lightness in the moments when he is on stage as the ditsy, well meaning Liam. His presence is needed to strike the right balance of mood and keep the audience engaged. Unfortunately his character is not fully fleshed out enough to keep a meaningful connection. This is the same case with Fin Watt’s Will, who appears to have an interesting backstory that we never quite hear enough about.

In some ways, I feel as though you could defend these flaws. Part of the ethos of this show appears to be that things are tricky, messy and not easy to explain to everyone all of the time. Regardless, the show still manages to create a really engaging story with Paul, Barry and Annabelle so that we stick with it. It probably doesn’t need to fill seventy five minutes however and it feels like some careful snipping around the edges could be in order.

Saving Mr. Ultimate is a bold piece of theatre. Starting a conversation about suicide is never easy but this show manages to hook it’s audience in and ensure that they hear it out. Stylishly presented, deep at it’s heart and full of top tier performances, be sure to catch Saving Mr. Ultimate this Fringe.

You can watch Saving Mr. Ultimate at TheSpaceTriplex August 21st, 23rd, 25th and 27th. Tickets are available through the EdFringe Box Office.

INTERVIEW: A Digital Pint with… ELOINA, betting with ‘HIGH STEAKS’ at VAULT Festival