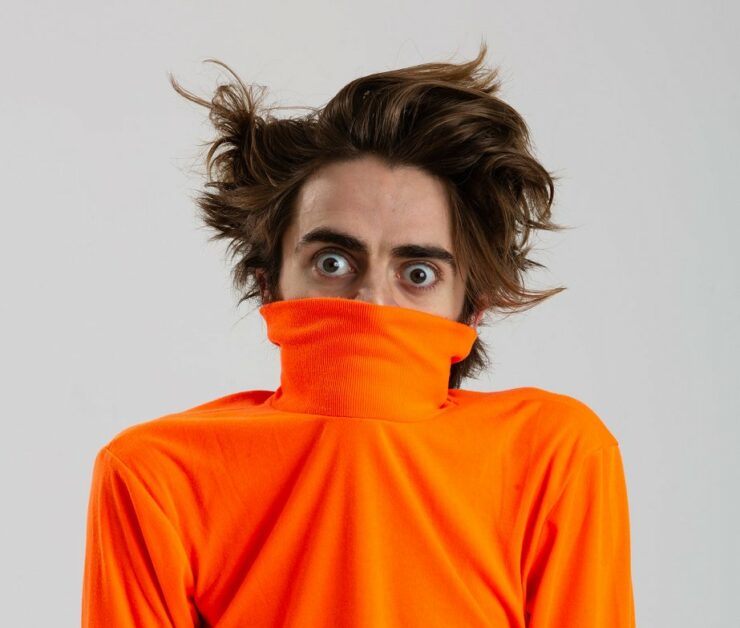 Some time after I saw his show, I met Luke Rollason while standing outside the Monkey Barrel. He mentioned his experience at a Clown Camp a few years back – I was honestly surprised. This was not a man with a painted face and a funny wig, just a guy with a penchant for bright, monochromatic outfits, and a huge range of facial expressions. I am slightly scared of clowns, but this guy’s clowning opened my eyes to physical comedy – big red squeaky nose not included.

Rollason provided an immensely funny tour de force of physical comedy. Even as we found our seats at his sold out show, it was clear that Rollason’s performance would be pretty kooky – judging by his lampshade headwear. And he would continue to play with and subvert any expectations we might have for a prop he would pull out of nowhere, meaning the entire show felt very fresh and interesting. It also means it is pretty hard to sum the show up in any way beyond its tendency to surprise, and its devotion to farce and whacky humour.

Rollason rolled through countless characters and sketches with ease, cobbling together props (and co-stars) out of things found in his kitchen and garage. He dealt well with any props mislaid or broken on his little stage, and these improvised moments only added to the general whacky hilarity of the show. This is not to say that the show seems messy in a bad way, just that Rollason excels in moments of sheer craziness – whether it be his own, his props, or even the audience’s. Production wise, the plinth in the Monkey Barrel is not the most spectacular (especially in comparison to the elaborate props), but Rollason utilises music cues and lighting to great effect. The simplicity of it, and the eye-catching tight orange get-up, was just all-round impressive.

Despite the occasional slow moment (perfectly expected for a WIP show), Rollason’s show is sincerely funny. Kids and adults alike laughed along – often to Rollason’s apparent surprise. Some of the best moments included his responses to the audience, and his involvement of clearly confused kids. Certainly, his parody of that moment in Ghosts is the absolute highlight, turning an already ridiculous scene into a sketch beyond the most ridiculous proportions.

Bowerbird is a beautifully manic piece of comedy that delights… and delightfully confuses. I am often sceptical about ‘family friendly comedy’, but Rollason’s take on it is a genuinely funny example of doing it right.

Warning: those with aversions to buttcracks should avoid. Enthusiasts, however, will thoroughly enjoy.

London-based, with a focused effort so far on writing about stand-up comedy and performance art. She has a masters degree in English Literature, and is interested in the voices of emerging artists and creatives, especially with reference to literary texts and political events.