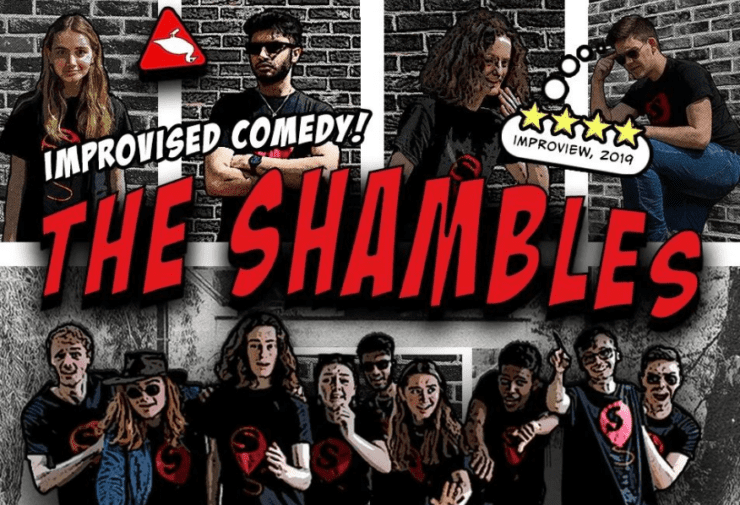 Armed only with a sickly sweet Rekordelig cider and my preconceived notions of this particular improvisational comedy troupe, my expectations for this show were certainly high. While most audiences use alcohol to aid or enhance their enjoyment of comedy, this beverage did not really elevate me to any drunken state…yet I still found this Shambles show to be a memorable, laugh-an-every-three-seconds experience. Shout out to Rekordelig.

But this review is not about Rekordelig (you can check *that* review out here). No no. This is about a particularly highly skilled group of actors who call themselves The Shambles. An ironic name indeed, as the group are anything *but* shambolic.

As is such with all the best improv, the audience participation is a crucial factor in the company’s success from the very beginning, as demonstrated by presenter, Qumarth, who expertly gauges the audience’s interest. Via games which implore the viewers to shout out suggestions for the company to act out, i.e. a non-geographical location, celebrity, or even animal. Placing the outcome of the show into the hands of the audience is a brilliant idea to begin with, since it automatically opens up the collective imaginations of audience members who are not scared enough to speak out with their ideas. The opening game, for example, involves four company members acting out a typical BBC News scenario, except three of the cast possess unusual quirks, like a tendency to skip the third word of every sentence. The fourth member must then leave the room while these quirks are selected, leading to a hilarious game of deduction at the expense of the participant.

The skill and the company’s expertise at the craft is exemplified further in the panning game, where three cast members stand in a triangle and create short scenes based on audience suggestions. At the group leader’s command, the triangle then revolves around to reveal a totally different scene. While resembling some sort of standard drama school warm-up exercise, this “panning” game requires the company to be so fast on their feet, it is very admirable and impressive from an audience standpoint.

The company further demonstrate their skill in the ludicrous “follow the leaver” game, in which a scene is crafted from a simple non-geographical location suggestion from the audience, and the action follows whichever character happens to leave the room in that scene. The sharpness and comedic skill of The Shambles is proven further here by their ability to spin the simplest of ideas out of control into the absurd, as the “sewer” setting leads to an improvised story about degenerate Northern sewer dwellers planning a revolt against a BT helpline worker. This swiftly spirals out of control further, to involve Teenage Mutant Ninja Turtles and murder.

Further highlights included (without wanting to spoil anything), a Mock the Week style “world’s worst” game, and a parody charity single about sloths. Of course, it’s impossible to maintain a constant level of hilarity, as demonstrated in the final game you see in the evening, where an improvised scenario switches between whichever external character is mentioned. On this particular evening, some of the scenes that unfurled where not that engaging. However, due to the nature of the game, the game may then switch to a scene that works very well, i.e. a futuristic German colonel and his interactions with a murdering robot played by Ollie Jones.

Overall, The Shambles are an incredibly apt and consistently funny act, who manage to jump from surreal scenario to surreal scenario with ease, and filter random audience suggestions through their own well-developed sense of humour. Despite the brilliant comedy, the one blind spot (incoming pun intended) was that I had a fucking big fuck-off stage light shining in my bloody eyes the whole time due the seating arrangement so now wherever I look I have bright circles to my left and it feels like I’m never truly in darkness when I close my eyes. Other than that – superb.

The Shambles will run until the 25th August at 22:20pm at theSpace @ Surgeons Hall. Tickets are available from the Fringe Box Office.