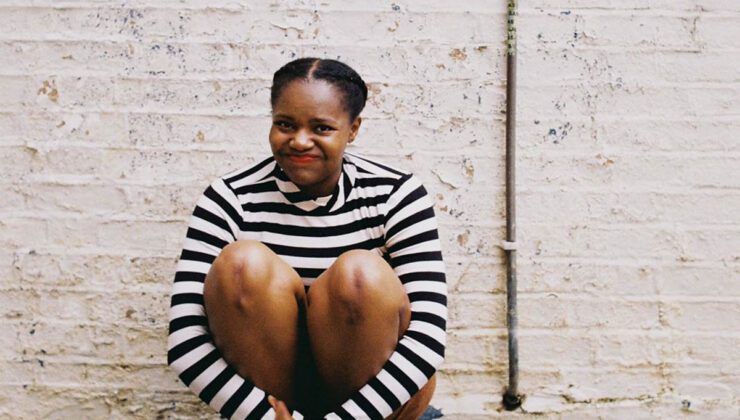 She’s been putting together a kick ass speech for a year now. But in the moment that she meets him, she accidentally agrees to go to dinner that night. Now she’s in her room and she has decisions to make – should she go? What does she wear? What should she say?

Patricia Gets Ready (For a Date With the Man That Used to Hit Her) invites you into Patricia’s bedroom on that fateful night. Beyond the decisions she has to make, Patricia guides you through the past year of her life, her childhood as well as the power of language and feeling. Described as “aiming to shatter the weathered stereotype of the broken woman”, this show is a powerful reclamation of a deeply traumatic experience.

This is a show with the power of language at it’s heart. Peppered throughout, Angelina Chudi’s Patricia delivers dictionary definitions of words and pulls them apart to reveal society’s inherent presumptions about victims. One part that stood out to me was the reconceptualisation of the word shame, as shame implies guilt, and yet it is a word we so commonly associate with abuse.

Writer Martha Watson Allpress wants to dissolve that concept of needing to feel shameful about abuse, putting in it’s place empowerment and justified anger. Patricia Gets Ready (For a Date With the Man That Used to Hit Her) does this through an intensive and all-examining look into the psyche of a character preparing to make her own stand and reclaim what is hers.

What is so immensely impressive about the methodology behind that is the presentation of Patricia across the hour we spend with her. Throughout she is constantly ready to crack open any taboos to her audience about abusive relationships. She forces us to not think about her just as a victim, but to think about her relationship with the unnamed man.

These taboos extend beyond the reaches of abuse. She describes in great detail her sex life with the man (and the precedents before him that led to the sex being the way it was) and how their sexual disembodiment contributed to her feelings of being needed, and how being needed is being wanted, and the value we ascribe to that in relationships.

The section which largely deals with the hitting is visceral and returns to the central concept of language and the things an outsider wouldn’t consider – the questions we ask people who have suffered, how it’s impossible for words to transmit how it feels to be caught inside an abusive situation. Most importantly however, how language led to domination. Being called a slut for dancing with her friend, how she apologised to him the day after being hit.

Chudi’s performance is breathtaking across the entire hour. There is not a single moment in which you are not captivated by her. Through what I don’t doubt is exceptionally careful direction from Kaleya Baxe, we are dragged into that world and not allowed to leave it for an instant. The stories she tells are engrossing and thoroughly entertaining, especially about her childhood crush and her relationship with her mother. However, they eventually feed all directly back into her empowerment and deepening the audience’s understanding of her emotional state.

Chudi embodies the character for every second she is on stage. The way she acts is so immensely believable that at times, audience members felt compelled to join in with the (what should be) one way conversation. For instance when she is trying on outfits the audience members around me were more than happy to comment on which ones they liked and didn’t with “Oohs” and “Aahs”. The resulting effect is an audience that is so deeply invested in the character that they can’t help but fall into her world.

That is how you get people to listen to the message of your show. If there even is an exact message is it’s own question – Patricia is not simply reducible to a “message”, she’s an entirely crafted character with so many facets and she just wants you to understand the power she has already reclaimed, and the power she must continue to reclaim.

There is no release of tension at the climax of Patricia Gets Ready (For a Date With the Man That Used to Hit Her). The final moments reinforce the sticky, impossible barrier that social interaction puts up between the things humans want to say and the way that words actually carry those feelings and meanings.

Patricia Gets Ready (For a Date With the Man That Used to Hit Her) is a masterpiece. It is a show which annihilates your perceptions and forces you to confront your unconscious biases. It is a breathtaking experience that smashes taboo around victimisation and tells you a survivor’s tale in glorious emancipation.

Catch Patricia Gets Ready (For a Date With the Man That Used to Hit Her) at the Lomond Theatre, the Pleasance at EICC until August 22nd & then again between August 24th and 29th. Tickets are available through the EdFringe Box Office.