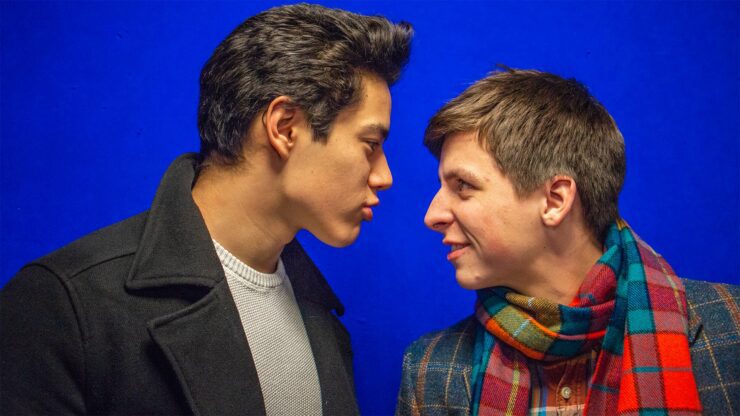 What happens when the Doctor has finally killed all the bad guys? This is the question that the brilliantly funny Doctor Whom sets out to answer. Without a doubt this is a show for any Whovian up at the Fringe this year – but even if (like me) you haven’t seen the show in some years, you still have a bag of giggles awaiting you in this Sci-Fi spoof from A Time and A Place Productions.

A jovial play-around with the format is what lies at the heart of this show. We open on a very recognisable scene that could very well have been from the TV show on which this was based, if it weren’t for the lewd homoeroticism (Oh shit, no, I forgot about Captain Jack, scrap that). With the titular character facing off against the Mister and his ‘ending machine’, the wily, goofy companion Stacey and aptly named Robot Dog are by his side.

But it isn’t long before Doctor Whom flips this all on it’s head, as Doctor Whom from Universe #1963 calls in to say she’s found a loophole that will end all evil forever, everywhere in the universe. After a period of chilling, Doctor Whom from our universe leaps back into action when it all inevitably goes wrong.

Jemima Langdon’s Jeff makes for a convincing new companion, although her exposure is somewhat limited just to robotic references. It would have been great to see more opportunities for her character to shine. The broader supporting cast have lots of entertaining cameos as the “Dorleks”, the rabid fans Rassillion & Bulek and Doctor Whom #1963. An absolute standout moment was Felix Davison’s Stephen Moffat impression in the most meta part of the show. It was very believable and left the audience in stitches.

Robot Dog is a treat throughout, particularly in an improvised joke about independence after he adopts a Scottish accent. I would have said that it was a shame he spends so much time out of the audience’s view (due to the unraked seating), but the cast reference this in enough good humour for this not to matter and for the audience to stick with it.

One of the few drawbacks of this show is the intensity to which the self-referentiality spirals. While initially I was following along with the story, I did find myself confused towards the end. One of the better elements of the first two acts is that the references to the BBC show are accessible even to less frequent viewers. Unfortunately, the story takes a turn toward unclarity – to quote a punter I met outside; “I was so confused, but I was laughing my fucking ass off.”

The production quality is superb and lighting design from Jonathan Powell keep this show firmly in the “late night” Fringe category – beaty, loud music and fast-paced lighting changes to boot. The inclusion of the show’s very own title sequence was amusing and kept the feeling that the cast were having a great time in fiddling about with the format.

Doctor Whom is utterly hilarious. It’s down to the show’s ever-spirited performances and witty characterisation that they manage to keep the audience hooked throughout the 50 minute run time. They should be commended for having so much fun with the format and storytelling – fans and muggles alike will enjoy themselves, even if they don’t follow everything all the way through.

A riotous, farcical celebration of all things Who(m), be sure to catch Doctor Whom before it dematerialises and you find yourself being whipped between the cheeks by the Mistress.

Recommended Drink: a Banana Daiquiri, of course. Or a Screwdriver if you can dodge the copyright case.

Catch Doctor Whom at the Jenner Theatre, TheSpaceTriplex until August 21st and then again between August 23rd-28th. Tickets are available through the EdFringe Box Office.

Disclaimer: A member of the creative team behind Dr Whom has contributed to previous editions of Binge Fringe. The show is unrelated to this reviewer or his work.