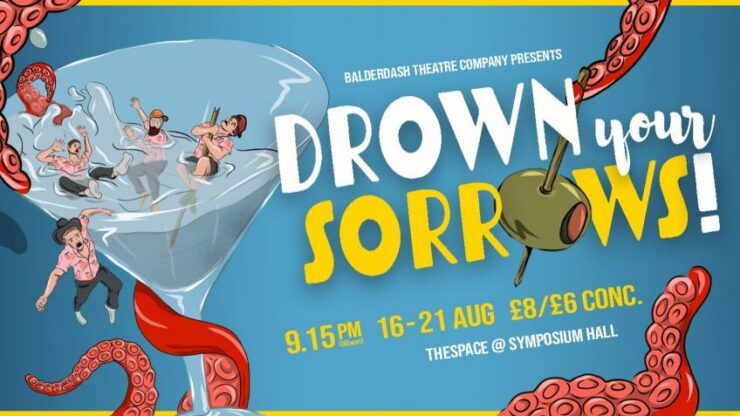 Four bartenders are on an adventure to find the Elixir of Life using clues left behind by their mysterious deceased pub landlady. This, of course, is a journey like no other, being that it will take them to various bars across the city of Norwich. From Cowboy shootouts in the Spineless Cactus to a Mission Impossible style heist in the puppet themed Hensons, Drown Your Sorrows! is a farce of the highest order. At it’s best points, it’s also terrifically funny.

In an opening Ukelele number, we are first introduced to the young and cheerful Ralph. He’s later joined by his moody and solemn counterpart Solo, the upbeat and aupicious Frank, alongside their manager Rudy. The roles, played by Alasdair Lindsay, Tom Rowntree, Alexander Wiseman and Jack Oldcorn, are all well suited and the foursome work well together as an ensemble cast.

They are working to find the Elixir with the ultimate goal of saving their beloved bar Mademoiselle’s, although each of the characters also have their own ambition through the adventure. Ralph is driven to “fix” Solo, who has been downbeat since the death of the aforementioned Mademoiselle. Rudy wants rid of the responsibilities of managing an ailing bar, while Frank is only interested in making more cash. Solo, true to his nature, is being dragged along the way.

With hopes that the Elixir can provide the cash to stop the bar being taken over by a (literal) Scrooge character, what ensues is a chaotic thriller-style comedy odyssey. Memorable moments include the Sea Monster singing his silly song as Frank and Rudy descend into the depths of the “bad drink pipe”, a metaphor for Rudy’s own personal failures. Equally hilarious is a last ditch puppet heist at Henson’s bar, the belly of the beast as it were.

Drown Your Sorrows! unfortunately suffers in a few critical regards. The show’s creators are evidently trying their hardest to fit as much into their fifty minutes as they can. This often led to scenes feeling rushed and the dialogue being spoken too fast to be properly consumed by the audience. While often funny, including some proper belly laughs, a lot of jokes failed to land because of this over-zealousness.

There were also some gags which felt not properly thought through. I expect that during the devising process certain sections put the cast into hysterics – but we, as an audience, feel as though we are not always party to the in-joke. This was particularly notable after the Cowboy shootout, in which a character called Andrew delivers an odd monologue about pregnancy and wanting to be perceived for himself.

Similarly, the improvised sections of the show failed to land with the audience, but did often cause the cast to crack. The old adage of comedy resonates here – the more fun the cast have making the show, the less fun the audience has watching it. This is not to de-spirit the merryness and tenacity on show here however. All of the cast have a keen wit and should be commended for attempting to put something so ambitiously absurd together.

The message of the show is a little unclear. It moves quite heavily into an emotive section towards it’s final act about self-improvement, although this becomes a little entangled with another attempt to talk about the joy found in working with a good team. Then, compounded on top, there is an anti-corporate message in the Scrooge character’s attempted chain takeover. I feel there was a potential missed trick here to dig in at a certain Brexit-supporting publican and his chain, in favour of a half-baked meaning which never quite finds it’s feet.

Drown Your Sorrows! is a bit messy, but some of the best farces are. With a bit of careful trimming this show could be a classic. For now however it remains chaotically irreverent, witty and bags of fun.

Recommended Drink: Anything from the bad drink pipe, just watch out for the slime.

Catch Drown Your Sorrows! at TheSpace @ Symposium Hall until August 21st. Tickets are available through the EdFringe Box Office.