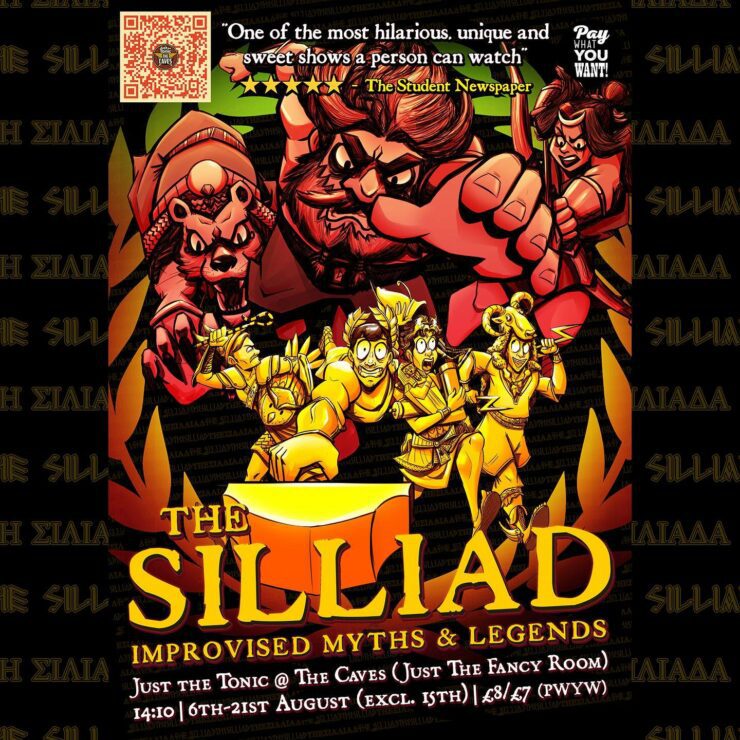 Ok boys and girls, here we are again. Welcome to the tidal wave of improvised comedy show’s available at the Fringe. Along with accapella and those classic ‘Shakespeare-with-a-twist’; the improv comedy market is VERY hit and miss. You have to be vigilant when choosing what you want to see. Generally, improv shows with a strong theme are a safe bet on quality, as normally you can expect the cast and crew to have some sturdy foundations on which pretty much all possible improv can be based on. This brings me to the show in question.

Silliad, as the title may suggest, is a show based on classic myths and legends.

What genre of myth would you like? Norse? Greek? Egyptian? (My audience went with Greek)

What non-geographical location would you like the show to be set in? “A wool shop!” screamed an audience member.

What great question would you like to be answered during the show? *A card is picked from a bowl in which audience members had previously thrown suggestion* “What happens after death?” Not necessarily a comic question, but a good one for the genre nonetheless.

I find it difficult to review improvised shows for the benefit of the average fringe goer because of course the show will change every day depending on suggestions. What is consistent in every show however, is the cast and crew. How wonderful these three gentlemen are. The comradery and fun they have on stage is infectious and they are clearly loving every mind melting second of it. You can tell they are close, by their willingness to set each other up for embarrassing moments, especially when you consider the massive amounts of multi-rolling in the scene. If you set up a following scene in a certain way, you may well find two characters (both played by the same person) meeting in some bizarre concoction orchestrated by the other actors.

I would like to make an honourable mention to a particularly hilarious fondue dipping scene, in which the technical director had to improvise sound effects on the spot. The fact that this is even an option highlights the fun and madness of this show.