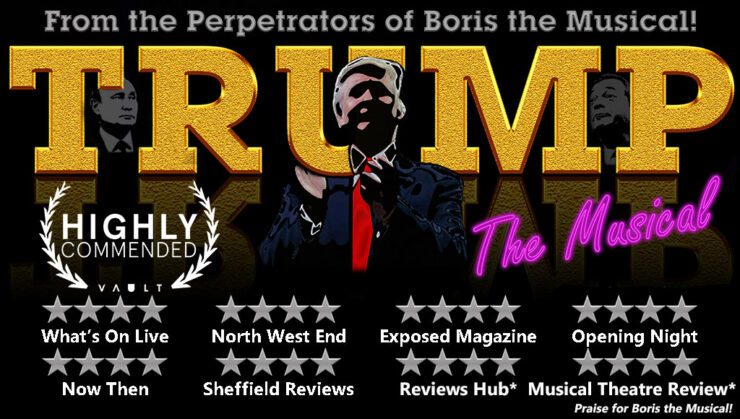 Spoilers. Not that it matters.

It was a dark and stormy day in Edinburgh. The sky cracked asunder, as the Norse God Thor wrought his anger across these viridescent plains. Rain smashed and scratched against the windows of my Airbnb like a threat; “don’t go outside, fool, for your skin shall be torn with the force of our water and shredded from the white of your bones.” In hindsight, I can see now that this was a warning of pathetic fallacy in advance of Trump: The Musical.

I will preface this review with what I liked: the songs are fun, particularly Putin’s solo; the appearance of Nigel Farage in a gimp suit is perfect for the Fringe, and the cast is generally energetic and fun to watch. These are the only highlights of the show.

There is no necessity that political satire and farce must be grounded in reality. Indeed, they are often framed as explicit opposites. However, it is desirable for there to be at least a mild relationship with the truth from which to extrapolate into comedy. For example, the show depicts Putin and Trump as former love interests, with a spurned Putin still in love with the orange president, seeking his revenge because Trump is now in love with Kim Jong-Un.

This isn’t funny because, in the real world, Trump is the one who has admiration (and possibly affection) for Putin. Putin doesn’t give a fuck, hence remaining dismissive of America even with a sympathetic White House. The entire premise of the joke is founded on an inaccurate reading of geopolitics and political corruption; satirists didn’t make fun of Obama because he was narcissistic, couldn’t spell and thick as shit.

Unfortunately, once one begins to notice this, one begins to notice similarly egregious errors, only enhancing the already deeply sad experience. In this world of hell, Nigel Farage is the king of Britain – yes, Britain, not England, because within the narrative context Scotland, Wales and Northern Ireland are all, somehow, still members of the United Kingdom. In fact, a key plot point is Farage’s planned invasion of Scotland so as to sell it to Trump for golfing purposes – a plot point which never actually goes anywhere because it doesn’t occur. Sure, it’s true that the overlap between being pro-Brexit and being anti-union is as significant in size as the volumes of unfiltered misery I received after seeing this show, but, again, there’s more humour to be found in working within the inevitable reality of an independent Scotland and a unified Ireland.

My vociferous frustrations grew further when the internal reality of the plot fell foul to inconsistency. King Farage references how the NHS is dead and sold off, despite a later scene depicting Putin hacking NHS servers to sow chaos, for example. Putin also confirms he gave Trump votes in the 2016 presidential election, suggesting this is the world many liberals feared and latched onto post-2016 – one wherein despots scratch each other’s backs and political corruption is entrenched in America.

But this does not gel with the third-act plot twist: Lavery, an advisor to King Farage, works for MLE (Metropolitan Liberal Elite HAHAHAHAHAHA), a shadowy international organisation which controls the EU and, it’s implied, every other supranational body (a real-world conspiracy theory, notable for being rooted in antisemitism). MLE, Lavery states, was founded in the aftermath of World War II to provide order and stability because the events of then-recent decades proved that people could not be trusted with democracy: Mussolini, Hitler, Stalin (even though Stalin came to power through a notably undemocratic system) and so forth.

So, in this story, a group of people predetermine the outcome of elections as a form of uber-paternalism, yet they somehow allow numerous figures who are explicitly opposed to their core political and ideological convictions to win elections. Or, they didn’t, which means MLE was stricken with wild incompetence in the year of our lord 2016 for mysterious and unexplained reasons. Or, the writers did not think about this.

The fundamental problems with all of this are twofold: comedy about Brexit and Trump is frequently unfunny and unnecessary, and it is socially and politically problematic. It has been four years since Trump announced he would stand for the Republican presidential nomination, which means there are four years worth of variations of the same ‘orange man bad’ joke. It is, fortunately, less prevalent at this year’s Fringe than those previous, perhaps for this reason, but also because of the political complications. Gags about Trump have the double-whammy effect of helping his anti-establishment image and alienating swathes of people from the joke. A lot of the fault of this lies with Trump supporters themselves for being so easily offended, but the core complication of Trump jokes remains: they are invariably aimed at his character, merely slightly exaggerating what is already reality, thereby not engaging with the abundance of potential comedy in his policies and ideological programme (insofar as there is one).

After a joke about the internment of children at the U.S-Mexico border, somebody behind me muttered: “that’s dark.” He’s right, but the show renders an image of Trump as a harmless buffoon rather than a misogynistic, racist, narcissistic and abusive predator of women who has revitalised the creed of white nationalism in America. Maybe getting to laugh at the silly president who looks and sounds a bit funny will make you feel better about yourself and your own political convictions for an hour, but to do so is politically and comedically regressive and outrageously out-dated.