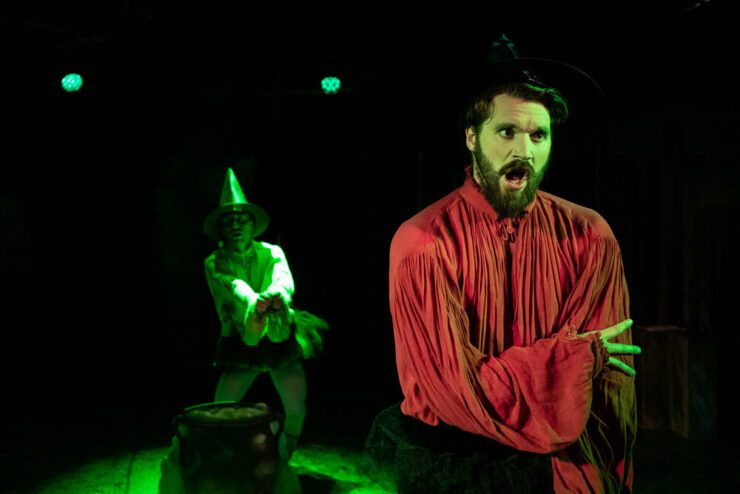 The Lost Musical Works of Willy Shakes takes a typically Fringe-esque approach to Shakespeare adaptations, positing that the Bard, while ruminating on his legacy, decides to reinvent his famous plays as musicals to perform before King James. Initially, I was concerned that it would be too similar to the slew of comedy and musicals dotted across Underbelly, Assembly, Gilded Balloon and so forth, but once the singing kicked in those fears were swiftly allayed.

Guy Hughes and Joe Leather are raucous and hilarious as Shakespeare and The Fair Youth, respectively, possessing some electric and homoerotic chemistry which charges Willy Shakes from start to finish. The duo weave through numerous figures of Shakespearean mythology with ease, displaying humour and confidence that made me want to see more from them both going forward. The production value is similarly good fun, managing to straddle the line between polished and black box theatre extremely well (which may not read like a compliment, but it certainly is one).

Most importantly, the original songs are inventive and self-aware in true Edinburgh Fringe style, my particular favourite being the riff on Hamilton (“white people? We fuck it all up!”). Genuinely funny and engaging, they are also packed full of Shakespearean references for the discerning students of literature and theatre in the crowd, but equally full of pop culture references and general wackiness to ensure that they’re accessible to all.

If you’re looking for some good, silly fun at the Fringe, then you could do worse than to check out the multi-instrumental adventure that is The Lost Musical Works of Willy Shakes, performing at Assembly Rooms at 22:40 from August 1 – 12, 14 – 24.