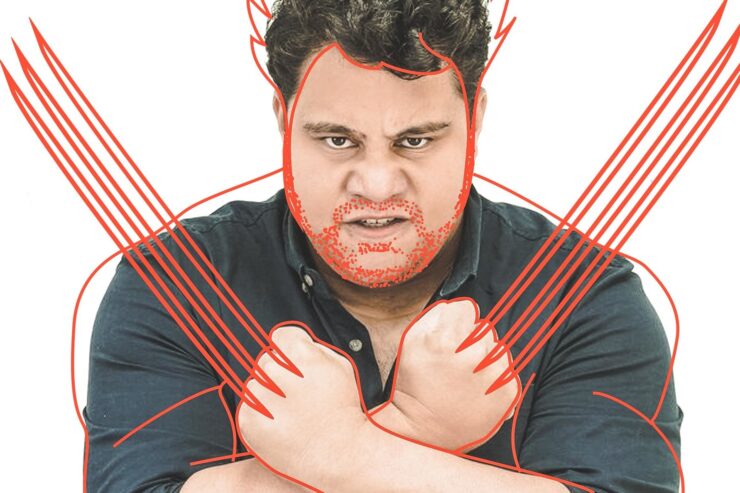 Often, when roaming through the Fringe, you can get totally swept up and overwhelmed in the thousands and thousands of shows going on at any given time. How does one know that the particular show they happen to pick will be any good? What if you’ve wasted your money on a whim? Was there another, better show you could have seen instead, one which would have improved the quality of your day immeasurably? Valid concerns, no doubt, all of which dissipated quickly as my chosen-on-a-whim viewing of Super Hugh-Man kicked into gear.

The unconventional autobiographical story of a Maori boy’s journey to studying musical theatre, star Rutene Spooner focuses it through the lens of his childhood (and adulthood) idol: Wolverine and, by extension, Hugh Jackman. Spooner’s affection for Wolverine and the X-Men franchise is earnest, even if the link between his fandom and tales from his youth and of Maori life initially feels tenuous at best.

This improves as the show goes on, however, and Spooner details his discovery that, in addition to playing the iconic mutant, Jackman is also a musical theatre star. Spooner himself is funny, confident and self-deprecating at just the right moments, with a killer voice too. The original songs are all tremendously fun – and heart-breaking, such is his rendition of Johnny Cash’s Hurt as he details watching Wolverine’s death in Logan. Even thinking about it now makes me melancholic. Mr Spooner, if you’re reading this, can we hug?

Overall, it’s a sweet one-man show about finding one’s identity amidst clashes of culture and claws, fronted by a lively and engaging performer. If X-Men references and learning about Maori life in New Zealand is up your street, then check out Super Hugh-Man at Assembly George Square Studios at 12:50, August 1 – 11, 13 – 18, 20 – 26.