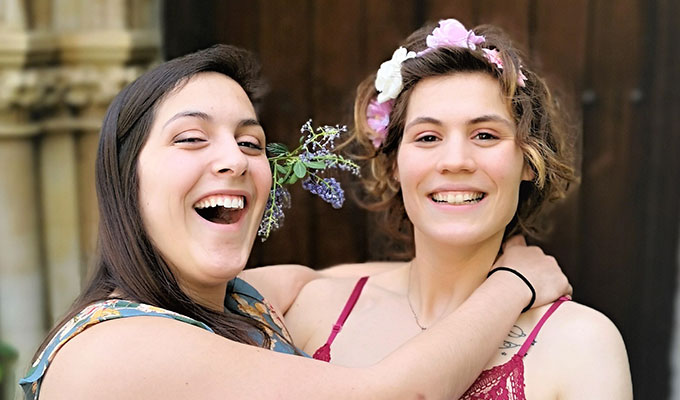 Once again, it’s that time of year for comedians and actors all over the world to converge in this beautiful city of Edinburgh for the 62nd Edinburgh Fringe – which means we at Binge Fringe are BACK, in all caps, for another round of late-night, alcohol-infused literary love letters (and sometimes that not-so-loving). First up, we’re reviewing the improvised romantic comedy from the Cambridge Impronauts: Improv, Actually.

Like many improv shows, the show began with each audience member writing down some information for the cast to go on: a name, an occupation, and a hobby. I am not the quickest wit (so I’m consistently reverent of anybody who can do an improv show, and why these definitely hilarious reviews take ages to write) and submitted a fairly sub-par response. No matter, I told myself, because the safe cloak of anonymity which the format provides meant I could forget this episode forever. However, let down by my incredibly poor handwriting, I had to publicly identify that, yes, the occupation was ‘sheep-watcher’ (it’s probably a thing), and, when the inevitable audience rejection of my idea came, everybody knew who had the audacity to put it forward. Even better, I ended up sat next to a comedian off the telly I actually quite like.

Good. This was a good start to three weeks at the Fringe.

No matter – the romantic comedy about a dramatic vampire quickly swung into motion. It took a while for the plot to get going, and it skewed a little bit away from the initial pitch, becoming more about corpse acting as opposed to its vampiric cousin. Staging-wise, the entrances and exits of actors needs some smoothing over, with several instances of performers pre-emptively stepping out to move onto a new scene before the scene in question had run its course.

That being said, the performances themselves were lively and energetic, paying particular credit to Alice Wenban for her consistent characterisation throughout. The live music element was also impressive, given that their resident musician was literally making it up as he went along. I’m always in awe of improv performers’ ability to create a story on the spot and seamlessly communicate that with their fellow actors, and now I hold those who do the same musically in similar esteem and/or jealousy (more so jealousy). Indeed, the improvised love story managed to be funny and engaging, feeling cohesive throughout and managing to tell a fairly complete tale of love and abusive working practices in theatre.

Moreover, the revelation at the end that the cast included some non-Impronauts explained away the few bumps in the road, and made it all the more impressive that the show still came together without a hitch. At the end of the day, what more can you ask of improv comedy?

Cambridge Impronauts: Improv, Actually is playing at the Gilded Balloon Patter Hoose at 12:30 from August 1 – 26.

INTERVIEW: A Digital Pint with… The team behind the ‘Strange Fruit Cabaret’ at VAULT Festival