REVIEW: This Is Where We Get Off, HI! Productions, Websters Theatre Glasgow ★★★★★ 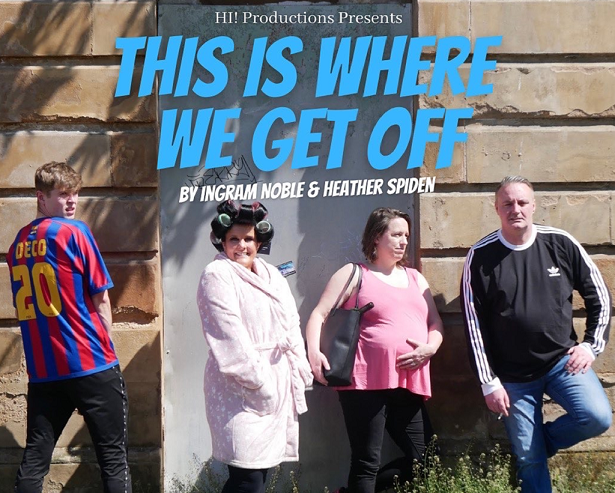 Familial ties tear and repair in Bricklethwaite, a council estate in the North of England. The Moffatt family are living paycheck-to-paycheck, father Phillip (Robert McCahill) is drinking their disposable income away, son Lip (Josh Knowles) wants a new life and mother Yvonne (Laura Begley) is just trying to keep the family unit together. This Is Where We Get Off is the debut of Glasgow-based theatre company HI! Productions. It is a reminder of how theatre can, and perhaps more often should, be done.

To a backing track of noughties pop we’re treated to episodic instalments of the Moffatt’s antics. The story, while linear, is in equal parts phenomenologically fragmented and fractured as to reflect the relationships we see. Equally it echoes the psychological state of Sylvia (Freda MacDonell), the returning grandmother of Lip who it is soon revealed is suffering from dementia after an eighteen-year absence. Her return opens old wounds for Yvonne, who has a turbulent relationship with her mother, and sends the family into a spiral of inevitable events.

Like any family, the story of the Moffatts is twistingly complex. Ingram Noble and Heather Spiden’s script is well-crafted to deliver neat payoffs throughout the story. In an early scene, Yvonne and Lip discuss the use of contraception and Yvonne suggests buying contraception for him. Later we see condoms being blown up as balloons by Sylvia, in a scene which had every audience member in stitches. What did Chekhov say? If you show a condom in the first act, make sure it’s being used as a party balloon by the third. Something like that anyway.

A delightful subplot develops in the Ann-Summers-rep-cum-dog-breeder Rhonda, played by the formidable Leah Moorhouse. The moniker ‘Scene Stealer’ might be used all to often these days, but Hurricane Rhonda exacts her hilarious damage on the rest of the characters every time she emerges with rollers in her hair. It’s an exacerbated performance, however Moorhouse carefully handles her character to limit stereotyping. Instead, the tight direction of her character allows us to focus on the comedy of her brash, unforgettable nature.

Begley’s performance as Yvonne centres the audience well within the narrative. While relatable on a human level, Yvonne is a character that transcends the audience’s need for apathetic empathy and allows us to view the story of the Moffatts through the eyes of the ‘hero’ in this story. She is the social glue which bonds the family together, unconditionally loving but still a firm force on her family’s expectations. Begley embodies the character in a relatively flawless performance, especially notable in a scene which she shares with Sylvia where they brush each other’s hair and deliver a duet cover of ‘A Natural Woman’.

The quality of performance in this scene, both from Begley and MacDonell, is potent and heartfelt. The play shines at its best during intimate moments shared between two characters, which intersect the more dramatic and strident moments that provide the drama. Knowles’ performance as the eighteen-year-old Lip is another standout, showing nuance and verve in refusing to be pigeon-holed by traditional ideas about young working-class men. His failed relationships have a genuine reflexive impact on his character. This is something which the show creators should be admired for in concept and Knowles should be applauded for delivering so effortlessly.

Phillip is generally an unlikeable character in the early acts of the play, undermining his wife and son’s efforts, to dream bigger and manage the family respectively, with his drinking and ignorant attitude. McCahill provides subtlety as we watch his character arc transgress this attitude to genuine care for his family. Still, he finds himself stuck in a cycle of alcohol abuse as the family deal with the tumultuous final act of the story. To its absolute credit, This Is Where We Get Off transcends the broader media obsession with depicting working class people as one-dimensional characters for a cheap laugh or weak Soap Opera plot.

The production especially excels at engaging its audience in an experience. HI! Productions linked up with Glasgow charity ‘Battle Against Dementia’ to provide donations from brochure sales. Beyond this performative action however, the audience become sunken into a narrative which engages them with family drama and sex jokes, while never losing the poignancy of the tragic consequences that dementia has on its sufferers and their families. Sylvia manages her illness best when the family unit comes to accept her and reconcile, without forgetting the impact of her troublesome past. The performance of every character is never one-dimensional, the direction never too slim on the content it handles.

Besides, this review so far doesn’t do justice to how much of a riot the Websters Theatre was on a random Thursday evening. Alongside boogying to the aforementioned pop tunes, the audience often verbally assaulted characters for their shitty decisions. The reason that happened is because for the whole runtime, we felt that we were deeply connected to the lives of the Moffatts and invested in their welfare. The result is a relatability that jumps the gaps of class. Those who have experienced troubles like the Moffatts will find a profound relationship with their story. Those who haven’t will be charmed by this show’s cunning ability to drag them into their lives and reconsider the privilege of their circumstances.

This Is Where We Get Off has bags of charm, character, smarts and wit. Its moral goes deeper than you’d expect and drags you into the orbit of chaos that makes up the Moffatt’s lives. This might be where they get off, but the audience is only just getting on.

Recommended Drink: Grab a bottle of wine and listen your Gran’s best ‘Never Have I Ever’ story.

Keep up with HI! Productions’ social media to find the next showing of This Is Where We Get Off.