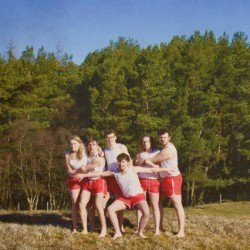 We don’t know if you’ve noticed, but there’s an awful lot of comedy performed at the Edinburgh Festival Fringe. Like, really quite a lot. Amidst a tidal wave of sketch and stand-up, it can be hard to find the diamonds in the rough, the shows which truly are worth watching. Fortunately, we spoke to the right people whilst flyering on the Royal Mile, and ended up watching the gut-and-brain-busting Bears from the St Andrews Revue.

Bears holds an unlikely premise for a sketch comedy show: there is actually a narrative, albeit a minor one, about the Revue being held hostage in some kind of barbaric, late-stage capitalist dystopia wherein they are subject to frequent brainwashing in the form of sketches. Best to get the negative elements out of the way initially and declare that this was the weakest part of the show, with not quite enough clarity to sustain momentum for such a variety of sketches, but it is a minor point when considering how well-executed the sketches themselves are, largely due to the amazing chemistry of the cast.

The St Andrews Revue Presents: Bears! is performing at Assembly Hall at the Edinburgh Festival Fringe until August 25th. If you’re on the lookout for impeccable sketch comedy, Binge Fringe could not recommend Bears! highly enough.