INTERVIEW: A Digital Pint with… The Goat Exchange, bringing ‘JASON’ to the stage at VAULT Festival 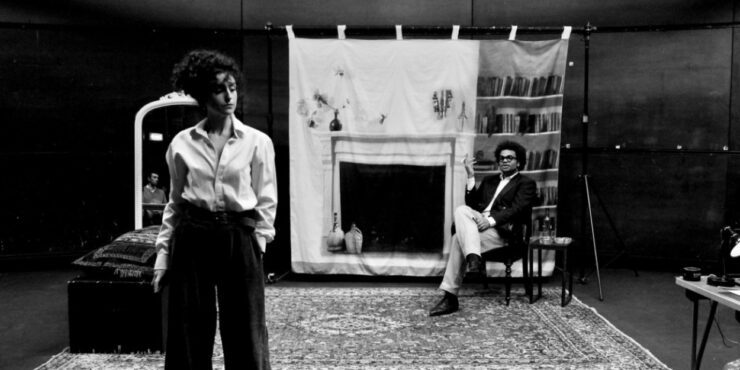 Today we’re joined by the team behind JASON, a stage adaptation and interpretation of the seminal Queer Shirley Clarke documentary Portrait of Jason. The Goat Exchange describe themselves as an international ensemble fascinated with site-specific theatre and “reappropriations” of classic dramatic texts. This piece takes a sideways look at the life of hustler and nightclub performer Jason Holliday, through the eyes of its central performer Marcus Amaglo, bringing intriguing new questions to a story which already lays on so much intrigue in its original form. We sat down with the team behind the show to talk all things JASON.

Hi team! You’ve put together a piece interpreting the seminal piece of Cinema ‘Portrait of Jason’ from 1967 – what inspired you to create the piece and bring it to VAULT 23?

“We’re always on the lookout for new and surprising source materials to work from — films, old obscure plays no one’s ever heard of, famous plays that everyone’s heard of but no one really understands, verbatim historical transcripts, found texts — just about anything and everything. In this case Marcus Amaglo, the actor playing Jason and our newest ensemble member, has wanted to make a live piece out of Portrait of Jason for some time now…”

Marcus told us “I wanted to be Jason for so long—before I’d ever seen and loved the film—in my childhood, in my adolescence, but especially now.” JASON is a lost icon, or as Marlon Riggs puts it in Black is Black Ain’t, “How long, Jason, how long have they sung about the freedom and the righteousness and the beauty of the black man and ignored you. How long?”

“We wanted to bring Jason back, live and in colour.”

Jason Holliday is a unique character, as you put it – self-described “hustler”, “houseboy” and “male bitch” – what was your process in transfiguring that awesome presence to the stage?

“The challenge of transfiguring someone like Jason is allowing the fullness of the character and the actor to coexist simultaneously. Jason is so much larger than life – no one could have written Jason but Jason. We’re using a recorded delivery technique in which Marcus uses an earpiece and monitor to imitate every word, breath, gesture, action, of Jason’s performance in real time. We call it a simulacrum, and Marcus was able to do it brilliantly from Day One. It felt like Marcus had a little Jason living inside them that had been just aching to pop out at the first chance.”

“Through this faithful imitation, we get to see Jason as Jason was, but in a strange, unexpected, and beautiful way we really also get to see Marcus. We see Marcus’ love for Jason. Marcus is listening to and channelling Jason, responding to him. That relationship is extremely intimate to see playout, and the result is a truly astonishing performance that would be impossible to simulate through traditional acting techniques. As Carl says to Jason in the film, “the only part you can play, Jason, is you.”

Your piece shines a little light on the awry origins of ‘Portrait of Jason’ and its creators – what does the show have to say about its inspiration and how have you felt putting that message forward?

“We don’t intend this piece as a commentary on the ethics of the documentary or its creators and will leave it to the audience to make their own judgements. The scenario and the relationships are mind-bogglingly complex, and we were fascinated by everything we don’t know about what happened. There are so many references to past events, to questionable character histories, and not enough context to fill in all the blanks which creates a sense of mystery, of suspense, of menace.”

“You never know who to believe. It raises all kinds of questions about subjects and artists, and narrative, and identity, and sex, and sexuality, and history. We want to open that all up and put everything we have on the table without necessarily giving the audience answers we don’t have ourselves.”

Give us a flavour of what the audience can expect to feel, see and encounter as they arrive to see JASON at the end of this month.

“Expect to be surprised. And get ready to be uncomfortable. Jason and Marcus will be laughing the whole way through, but you won’t know whether or not to laugh along with them.”

“We’re just excited to hang out with audiences and the other artists around the space — it’s such an incredible complex of venues, and such a stellar line up of artists and we’re delighted that we get to be a part of it all.”