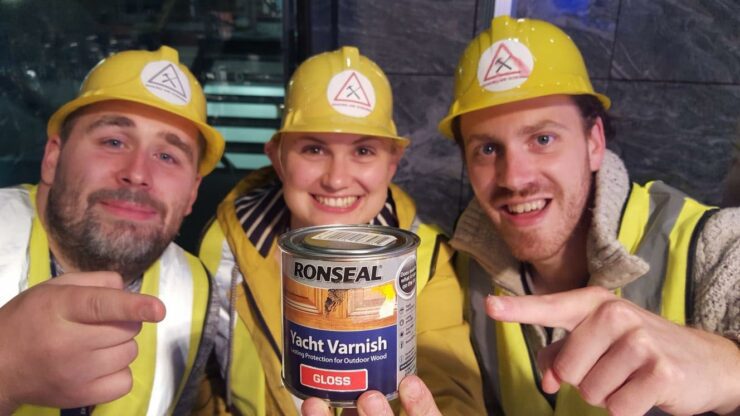 Megan Juniper, playwright and performer, this year brings us her third consecutive Edinburgh Fringe show, a musical adventure set in an independent and struggling hardware store, exploring the meaning of masculinity in todays society.

Leggy Blonde Productions‘ niche is relationships and sexual health, this niche paired with provocative titles results in large and consistent audiences. This year was no exception. I entered Surgeon’s Hall, perhaps my favourite fringe venue, beer in hand expecting to be taught and enlightened about a particular subject through comedy. I got comedy, I did indeed leave enlightened. However what this show lacked was direction in terms of a message. Instead of focussing on one or two issues. Banging and Screwing seemed to dart around many subjects: Masculinity, sexuality, STDs, rape, consent, virginity and contraception were all brought up at some point. As an audience member I felt somewhat confused as to what I was meant to be focussing on. Later this did become clearer, with a tea metaphor being used to explain consent more than once. But even so I didn’t leave feeling that the show was about anything specific, more just a general overview. Perhaps had I never seen My Fanny Valentine, a previous show by the company, I would not have felt this way. But I digress.

Lets dive into the story:

Gary (Andy Prain) and Lee (Megan Juniper) work in a struggling hardware store called Banging and Screwing– “Nailed it!”. ‘Struggling’ being the word used to describe the store, as a new branch of Homebase has opened across the street. This forms what is essentially a framing devise for the show, which then moves to focus more on personal issues (many of which I have already listed). Lee turns to Gary for his opinions and general advice on a few of his life problems, and inevitably they both burst into song (as you do).

I have spent a little time talking about what the show lacked, however it is important to highlight what this show has in abundance: energy. Simple as. Megan and Andy have an undeniable and infectious chemistry on stage, they play off each other with ease and they are clearly very comfortable performing with one another. They have a sort of double act quality, which is essential for a show with only two characters. They are simply: a joy to watch on stage. I also have to take a moment to compliment Megan’s singing ability, which once again left me mesmerised. Particularly during her rendition of ‘Perfect’ by Ed Sheeran. Although this song wasn’t a parody in the same way the others are. It provided a lovely contrast to the louder more comical songs (which I also enjoyed).

Overall Banging and Screwing offers what I have come to expect of Leggy Blonde Productions, which is essentially a fun hour of musical comedy. Meghan and Andy Prain have undeniable chemistry as Gary and Lee and bring wonderful energy to the stage. Along with the technical wizardry of Doug Price the show is loud, joyous and leaves the audience thoroughly entertained.

Banging and Screwing by Leggy Blonde Productions will run until the 18th August at 20:05pm daily . Tickets are available from the Fringe Box Office.

REVIEW: This Is Where We Get Off, HI! Productions, Websters Theatre Glasgow ★★★★★