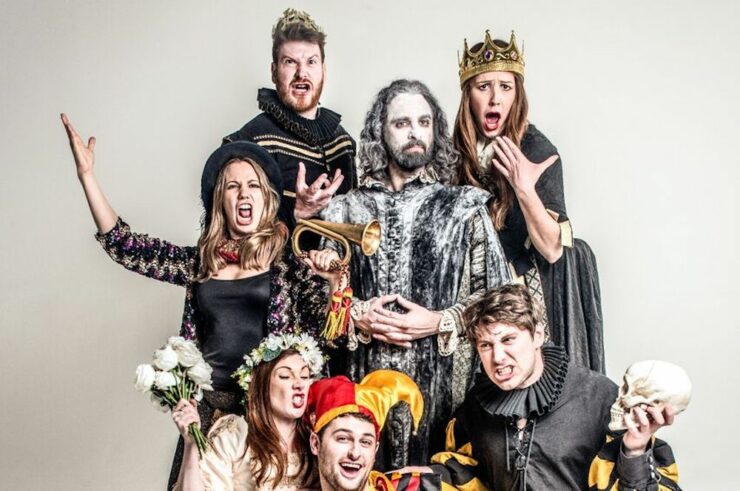 Armed with only a bottle of Death Juice I entered McEwan Hall with high hopes. Having last year watched the companies version of Romeo and Juliet I knew roughly what to expect and could easily justify the £13 ticket.

Shit-Faced Shakespeare is a genius and potentially dangerous concept. The idea to get classically trained actors and allow them to perform while off their tits is undoubtedly, an idea a drunk actor came up with. It’s no doubt blasphemy as far as Shakespeare is concerned, but there is something joyous about watching a man prance around on stage knowing full well he’s pissing on the memory of the greatest literary genius the world has ever seen and probably will ever see.

I am fortunate with my knowledge of Hamlet, having been in a sober production of said play. This meant that I, along with another Hamlet cast member and Binge Fringe colleague Ronan Goron, understood more references than perhaps the average Shit-Faced fan would. This does tinge my heart with a little sadness as the odd reference to things in a slightly garbled drunken way were not perhaps appreciated by the audience. But I digress.

In order to condense the script many scenes are cut in their entirety. For example, almost all scenes with Marcellus and Bernardo are cut. Along with Rosencrantz and Guildenstern these characters are not featured at all. You do however get the occasional line or speech from these un-featured  characters via Laertes who basically acts as Mr Context for the show.

During this particular performance it was King Claudius who was drunk. Once I realised it was him I wasn’t filled with hope as I struggled to see how Claudius could be amusing regardless of his drunkenness, oh my was I wrong.

The actor playing Claudius who also happened to be the director of the show. Clearly knows this play (both original and Shit-Faced versions) very well indeed. He also displayed fantastic off the cuff comedy, playing off a microphone failure as “the will of God” which prompted large applause and laughter.

The real success of this show however is the ability of all the actors both drunk and sober to simply go along with whatever happens. The improv sections of the show when Claudius did something ridiculous were wonderful, and the frequent references to mistakes-turned-lore were great. The renaming of Hamlet by Claudius to ‘Hamlet Fucking James Denmark’ a name that stuck throughout the show was a particular favourite of mine.

I also want to take this chance to praise Kurt. A member of the audience who was dragged out of his seat to play Lord Polonius. He attacked that role with such vigour and enthusiasm, with his death being a particular highlight.

I only have one issue, but it’s a big enough issue to not give it five stars. My issue was with Hamlet. It’s not a huge issue, but it is one that has prevented me from giving the show 5 stars. I do not believe this was any fault of the actor playing Hamlet. Infact I rather enjoyed this version of the character (with the exception of ‘to be or not to be’ which I think was rushed with the idea of getting back to drunk Claudius). There was a moment when Hamlet seemingly goes to quote on quote “grab Ophelia by the pussy”.

Another strange and incestuous moment with Gertrude also caught my attention. It is difficult to tell whether these were decisions made by the actor, director or perhaps something that Hamlet did when he was drunk on a previous night and the idea stuck. Regardless, even if it was an attempt to show Hamlet’s decent into madness (and perhaps during a standard production of the show it would be appropriate) these moments definitely left a sour taste in my mouth. Especially when people go to Shit-Faced Shakespeare for the comedy, and not the serious more in depth narrative. Although I understand the decision to try this anyway.

Despite this, Shit-Faced Shakespeare no doubt delivered a fantastic performance and as ever left me with a sore throat and severe stomach pain from laughing. Undoubtedly, a fringe must see.

Hamlet by Shit-Faced Shakespeare will run until the 27th August at 22:50pm daily. Tickets are available from the Fringe Box Office.