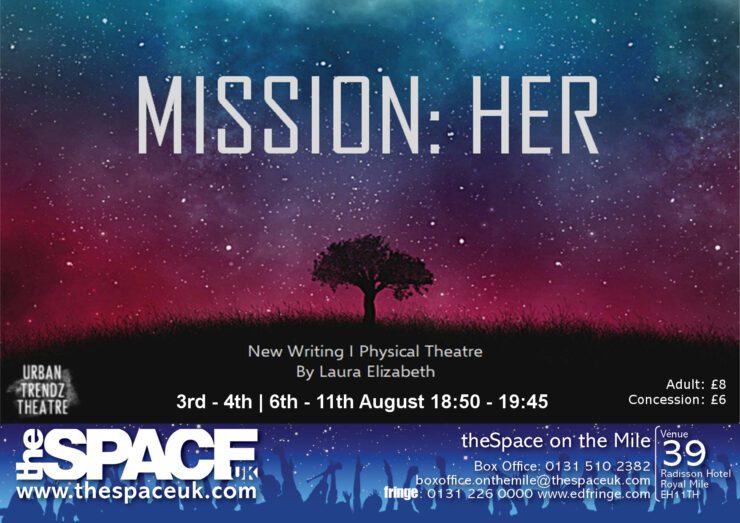 There is a massive saturation of plays about mental health at the Edinburgh Festival Fringe. This is no surprise – after all it is an extremely hot topic and shows which are able to deal with this subject in an interesting, stylistic manner are often among the most highly praised. It can be difficult then perhaps to stand out in a crowd of so many. To both educate on the issues you’re trying to raise awareness about while still maintaining your audience’s attention and being a stand out show.

Urban Trendz Theatre’s Mission: Her then. Three characters central to it’s plot. The deliberately ambiguous Him, Her and Mate. Her, a twinkling songbird pub singer, meets Him who becomes infatuated with her after watching one of her shows. They begin a romantic excursion and get to know one another. All seems up for this zesty and youthful couple until calamity strikes – Her’s Father is taken into hospital with a serious long term illness.

This unfortunate and terrible series of events spirals as Her begins to suffer from anxiety attacks – starting with her very first in the terrifying situation of being behind the wheel of a car with ELO blasting full volume. Him, struggling to quite comprehend the gravity of the situation, discusses it all with Mate. Mate then begins to open up about his own experiences with depression and most specifically with antidepressants. Him is initially reluctant to accept Her’s situation as depressive but seems to grasp a little more after this very deep emotional conversation with Mate.

After deciding to confront Her about the whole situation and a very piqued emotional moment between the two, they decide to try a number of ways to help Her get better – just to get through the day. Not to worry about the pressures of modern life such as social media and the expectation to have your life sorted out by your thirties. Her tries mindfulness apps and eventually settles on something calm which suits her and helps her day by day to figure things out a little more.

The narrative here unfortunately suffers from a lack of subtlety and inference. There is very much an “all laid bare” attitude towards mental health in Mission: Her which sacrifices style and metaphor. The discussion about mental health between all of these characters is spoken in extremely literal terms with often medical grade language which seems unnatural in regular conversation. This piece sets out specifically to do one thing, which is to educate. Despite this however, the discussion it holds about mental health does not seem accessible to those who may not have struggled with such issues.

All in all, it seems as though Mission: Her could do with a retooling. Urban Trendz clearly have passion for what they are doing and wish to use it to help others who may find themselves in a similar situation to their characters. A particular high point of the play that I wished I had seen replicated in other scenes was a monologue in which Laura Elizabeth’s Her performs a monologue about space and comparing it to the feelings you may hold in regards to anxiety and depression. This is a massive breakthrough moment for the piece as I feel it connecting with a more allegorical understanding of mental health.

Metaphor is extremely useful in creating a challenging piece of art. It is a projection for our thoughts on a particular topic which can be interpreted differently by those who see it and used by them to better command an understanding of the subject matter.

Anxiety is a mighty broad and meaty topic, not one that can be handled with ease. It’s worth commending the actors for being able to hold the attention of their audience in what could have easily been a very preachy fifty minutes. Desmond Hinks’ Him is particularly striking and revealing while Laura Elizabeth accurately captures the emotions of someone experiencing this kind of anguish and despair.

This wonderful acting energy could definitely be channelled into an introspective work of theatre, however Mission: Her may need to be re-crafted into something which looks deeper into itself in the expression of symbolism in order to achieve it’s maximum potential and succeed in educating more people on the ever important matter of mental health in young people.

Mission: Her will run until the 11th August at 6:50pm at theSpace on the Mile. Tickets are available from the Fringe Box Office.