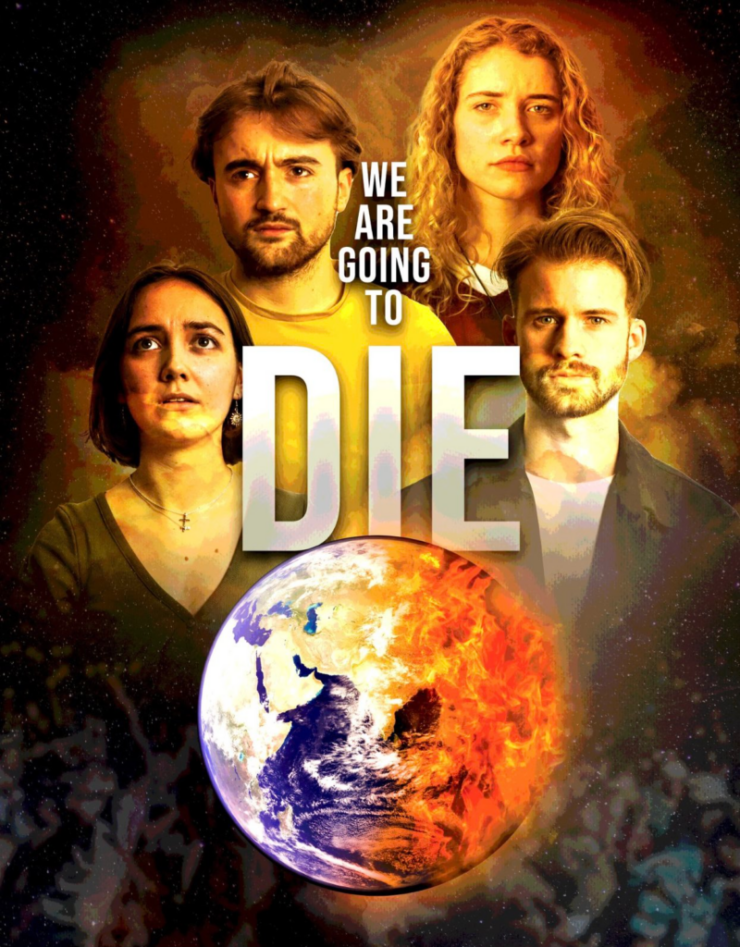 Today we’re joined for a pixelated pint by Phoebe Bakker, the writer-director of the apocalyptic comedy-drama We Are Going To Die, which lands at VAULT Festival at the end of this month. The show takes on the story of the planet’s imminent demise, via the themes of meme culture and grief, sprinkled with dark comedy all the way throughout. We sat down with Phoebe to talk all things about the show and get underneath the skin of We Are Going To Die.

You can catch the show as part of VAULT Festival at the Network Theatre between January 24th and 27th at 20:15. Tickets are available through the VAULT Festival Box Office.

Hey Phoebe! So your show takes on the interesting concept of humanity’s potential imminent demise… or not. Tell us about it!

“The play is set at a party one hour before these people have been told they’re going to die. It looks into this idea of meme culture and how when we get told about life altering events we mostly brush them off and create memes waiting (hoping) for it to pass. I thought but what happens if this time the threat is a lot more imminent, what if there’s a chance that it doesn’t pass. What do you do then? The play gives me a great way force people into conversations about topics that I don’t think are discussed honestly enough such as grief. You have a pressure cooker of a situation in which everyone is deeply aware of how little time they are left and as an audience member I think you really feel like you’re down there with them. You watch as these people learn and grow and they don’t know, just as you don’t know, if they’ll ever get to implement those changes which is heartbreaking.”

“The result is you get these really eye-opening and honest conversations that I think if it wasn’t set at the end of the world, you would be too afraid to have. That being said you also get a lot of ‘Fuck It’ attitude which results in some definite stupid, hilarious, impulsive decisions which makes the journey so colourful throughout.”

You’ve stated that We Are Going To Die is an inside look at how our society handles loss and fails those in need of support – how has it been handling this heavy subject matter with comedy, and what does the show have to say?

“I think each person is going to take a different thing away from this show because it’s such a huge topic to try and pin down. I only use true stories in this play, each story is something that either said/happened to me or somebody I know. When you hear it for the first time I think it can be quite shocking but thats the reality. What passes for grief support is actually very little and you see even in these characters who are all love each other so much going through the same thing they don’t even know how to support one another. Ultimately we can do better and I think what the show says it isn’t the fault of any individual but rather a larger issue that we have learned from society – we don’t want to talk about loss so how could we possibly expect anyone to know what to say, I didn’t before I’d lost anyone. The comedy is therefore… Oh my God, SO NEEDED. “

“I can’t write a sad play. Or rather I don’t want to write a sad play, it’s not who I am. Thats boring. I can write a play that has sad parts, sure, but I think to write a play that covers such a difficult topic and lean into it so hard that there’s no joy would be pointless. I want people to watch my play and think oh cool I’ve learned a little bit and if it didn’t have any comedy I think you’d miss the message. It’s a play about hard topics but boy are you going to have fun the whole way through!”

Give us a little glimpse into the process of putting together the show – how has it been and where are you at right now as VAULT creeps around the corner?

“Well its certainly not been dull! When we got accepted into VAULT festival I realised I was working on a much tighter time frame than I had planned for which really accelerated the process. We started casting pretty much immediately, we had people drop out, we had to find rehersal space and this all had to be organised whilst I was on holiday as I was not prepared for how little time we had.”

“The play was also initially 2 hours long. Ive had to cut an hour. Which is mental, I still don’t know how I’ve managed to do it. In fact even now I’m still making small adjustments to the script so it never stops really. It’s all been worth it though and I’m truly very happy with where we’re at. It definitely promises to be a good show and I can’t wait for people to see it.”

As the writer, you’ve said you like blending dark comedy with poignant messages – how have you found that in this piece and what kind of comedy can the audience expect?

“This play is ridiculous. It’s a ridiculous situation. The people act according to that which is to say ridiculously and I LOVE IT. I’ve always been a lover of dark comedy specifically comedians like Daniel Sloss have always been very inspiring to me. There’s certainly a balance with it, you must make sure your getting across your point however you must make sure people actually want to hear your message and you can never go to far in either direction.”

“When I was cutting the play down it was difficult to work out what goes; the humour or the heart? I think what I have now is very much the best of both worlds but there are some truly beautiful things that I’ve had to cut unfortunately. But as to what humour you can expect you’ll just have to come and find out.”

“I cannot wait for tech. My lighting technician has some really amazing ideas and it’s going to become so much more visceral when we get some lighting and sound on it. Currently it’s just me sat in rehearsals making ‘end of the world noises’ to demonstrate where they go and the actors tend to find that difficult to concentrate. I’m also excited to have that opening night experience where I realise that this play is no longer just mine it’s out there, it’s real which I imagine is going to be very surreal for me.”

“Other than that though I’m excited see some other peoples shows. When you get into VAULT festival suddenly you’re thrown into this little community and I’m so excited to support all the people that have been supporting us from behind the scenes. There’s an incredible line up this year and I’m honoured that we get to be amongst them.”

“It would have to be a Flaming Moe from that one episode of the Simpsons where Moe steals Homer’s cocktail recipe. Something about setting a cocktail on fire feels right for this play.”