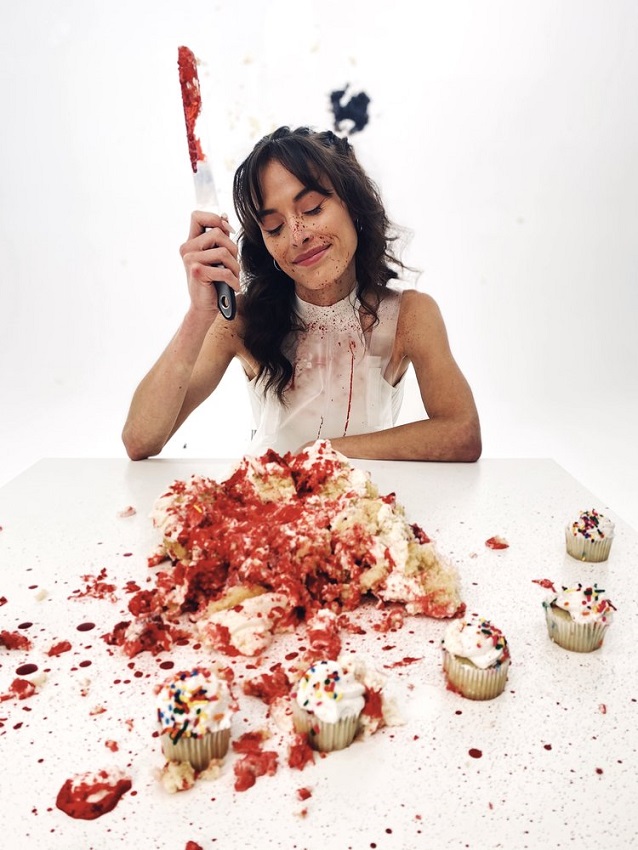 With a name like Cake and Violence, I was expecting mess, a lot of it. And while the concept and messaging were strong, there wasn’t much cake or violence. This one-woman show covered some important and relevant issues, body image, eating disorders and our relationship with food, identity, faith, pressure to perform and how we must find our way back to the truth, even when it’s the hardest thing we’ve ever done.

Cake and Violence opens with Nat Griffen swinging a huge cake knife around while sitting at a table with a perfect, giant cake in front of her. The opening sets the space and the scene. The first whack into the cake was satisfying; however, it didn’t get much more intense after this. The addition of cake boy was a lovely touch as he added something for her to bounce off.

There were many things to enjoy in this piece. Her honesty, messaging, and the journey we were taken on with her storytelling was commendable. However, there were structural choices that could’ve been a bit more creative, and I was left begging her to go further with incorporating the cake into her show. While it was included in several moments, more interaction, mess, and infusion of the cake violently into her piece would’ve had a more significant effect.

This show was advertised as wanting us to feel something and get back into our bodies. However, Nat spent most of her show sitting at a table and a cake in front of her, not being in her body. There wasn’t much of this in her physicality for a piece about eating disorders, cake fetishes, and the desire to feel inside her body. At times, it felt like a live TedTalk or a good story, not a performance. There was a massive, missed opportunity to actually pick up the cake, smear it on herself or build her dream boobs out of it, on her body, rather than on a whiteboard. I was left begging her to move the table to the side and let her physicality be the hero of her piece, completely destroying the whole cake in the process of re-entering her body.

While there are good bones here to build into a great show, it lacked physicality, movement and the high energy it needed to really confront, empower and perform with the audience.

Recommended drink: A Bloody Mary, to strengthen and give some real violence to this whole cake dying to be destroyed.

Showings of Cake and Violence have now concluded at EdFringe. Keep up with the performers on social media for future performances.

OPINION: The 6 Shows Binge Fringe Reviewers are Most Excited to See at EdFringe 2022