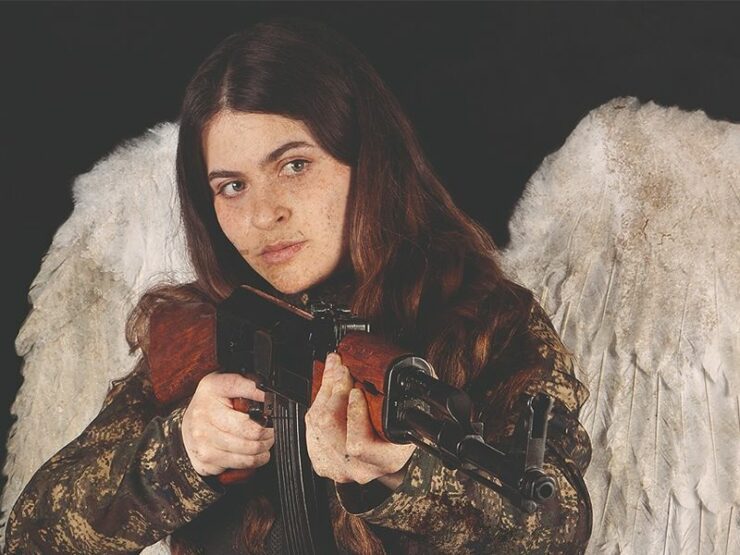 Trust none of what you hear, some of what you read, and half of what you see. The Middle East has been at war for well over a decade. Angel provides an emotive and accurate portrayal of the way life is for most people that have lived, are living or will live in the traumas of war. People, not numbers, not victims, not fleshy prisons for discarded spirits – people. This is a story of mysterious truth, women and Syria – My family’s home. Allow me the pleasure of introducing you to the enigma that is Angel, otherwise known as Rehana, an unexpected fighter that rapidly became a symbol of hope and resistance against Islamic State. Reminding us, yet again, that war in the The Middle East shouldn’t be easily accepted nor is it an ordained truth.

Before jumping into the importance of this play, let’s dive into what we know about Rehana, an  influential part of a constellation of stories that has shaped Syria today. Rehana, or The Angel of Kobane, as we will refer to her. A once angsty teen who wanted to become a William Shatner type lawyer instead of taking over her fathers farm. Unwillingly transformed from innocence and academic ambition into a prolific sniper.

Through her desire to be reunited with her freedom fighting father, Angel expeditiously discovered she had an aptitude for killing, and became lethal. It is said she was responsible for shooting more than 100 members of ISIS during the Siege of Kobane. A story shrouded in mystery, her whispered name instilling hope in the victims of war, and fear in those that deserved to feel the chill of living at the closeness of death.

Yasemin Özdemir plays Angel in a one woman play that is fast moving and somehow packed in an amount that allowed a fine tooth comb over all the ground that needed to be covered, and yet, never once felt hurried. Özdemir’s performance, coupled with the emotively descriptive writing of Henry Naylor and the Direction of Peter Doran created a piece that will force impact to linger, almost unnoticed, creating change within you the way a crumpled sheet takes on new character after you are gone. This beguiling story reigns in with a perfectly executed stripped-back style of Theatre. With a wooden slotted box, two knee high defensive walls and minimal well timed lighting that took us from scene to scene – as the only assets accompanying Yasemin Özdemir on stage. It was reduced to the theatrical essentials of script, direction, action and most importantly – emotion.

Representation matters because it can shape how minorities are viewed by society and how they view themselves. A personal and relevant digression as to why I understand the need for representation and why seeing this performance impacted me greatly. When I was growing up, people would proudly state that I wasn’t “even Arab.” Almost as if their arms were opened with a bouquet of compliments that unknowingly looked a lot like slurs, as if there was only one way to be Arabic. Where cruelty is ignorantly cudgeled as care, I subconciously began to believe that I needed to hold shame for what I was. Proud to be white passing. Proud to be mistaken for something other than my roots that connect me to my parents, to my grandparents, to my great grandparents. I became invisibly Arabic, with the mainstream media’s perception as my only representation. I, like many others, perfected the art of erasing part of me. Invisibility is not an objective state, it is a lack of care for humanity.

Scraping the surface of naive remarks from those who are not taught, challenged or shown otherwise. These remarks re-inscribe boundaries of who belongs and who is made a perpetual visitor. Our imagination has become malnourished by a world that limits our potential to be human and our potential to recognise others as human. Angel has the ability to dismantle your preconceived ideas if you just allow this performance a chance to teach, show and challenge you.

Somehow we have found ourselves at a place where we seem to move through the world with an entitlement to have comprehension before compassion. This frequently leaves room for preconceived ideas that could impact a large sum of people. Eventually this creates a response from the oppressed. We have seen this time and time again in history, whether it result in trauma, shame or retaliation. I believe that knowledge, education and compassion is the way forward.

For so much of my life – and many others lives – on topics that shouldn’t even be issues, I thought the goal was about fighting. Really it’s more about feeling because on our way forward, feeling is fighting. For those who require comprehension before compassion, please watch this show and have your eyes forced open, unable to unsee. For those of you who already hold compassion, buy yourself a ticket to guaranteed emotions and an insight to how many people in Syria have lived, are living and will continue to live.

There are many ways to exist as there are existences, this is a loud reminder that white is not the only way. Allow the hyper individuation of the west to crumble beneath your feet. Surrender to the complexity of our human race. Please take moments, thoughts and glances, to look beyond yourself. Imagine how golden the world would shine if we remembered that those of all races and colours, are people, not numbers, not victims, not fleshy prisons for discarded spirits – people.

Allow this heart pulling piece to remind you that the natural disposition of the world is infinity and absolutely unravel you.

Recommended drink: A glass of Glenfiddich 21 Year Whiskey, a blanket, sat by the fire and the deepest breath you’ve taken all day.

Showings of Angel have now concluded at EdFringe. Keep up with the company on social media for future performances.

Sarah is a lover of the arts from Australia, excited to experience all fringe has to offer and immerse herself in the culture of this unique expression voice, heart and character. She enjoys involving herself in every kind of performance, reserving a special place in her heart for spoken word, expression through movement, coming of age and all things gender and exploration.