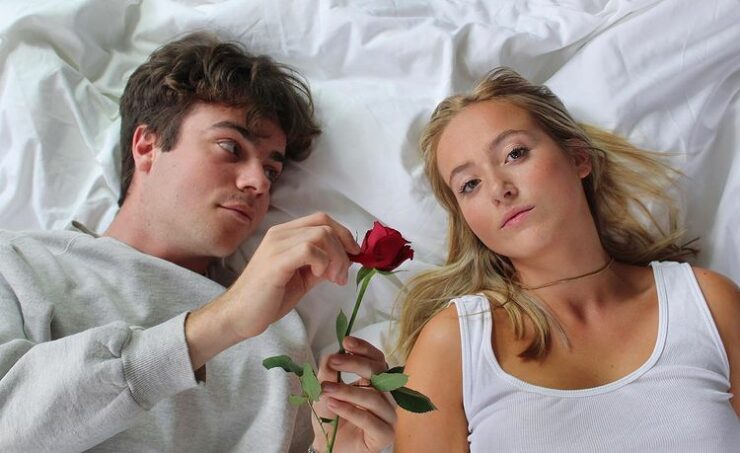 Honestly, I’m not sure where to start with this show. It demonstrated professionalism and thoughtfulness that I was not expecting. Written by Imogen Chillington, Bundle of Joy? depicts young newlyweds and their conception journey. Miscarriage, IVF treatments, confusion, and heartbreak, this piece shows so much truth about what this process could be like for many. With infertility rates rising, there’s never been a more critical time for theatre to address the difficulty of fertility and social pressures.

Bundle of Joy begins at the first anniversary of “XX” and “XY”. After pressure from the family, XX decides now is the time to start trying for children. Straight away, there is an urgency in her decision and a firm conviction in her reasoning. Speed and excitement slowly turn to desperation, and a fight neither wanted. The greatest sense of conflict between the couple is the way they approach conception. While “XY” wants a more relaxed and slowly evolving journey, “XX” is running the conception train. After a miscarriage and several months of IVF treatment, “XX” has a mental break, starts drinking and loses herself in the idea of babies. The couple takes some space and doesn’t realign on having kids or marriage.

The anxieties and lost sense of self faced by “XX” tells a true story and thought process felt by so many. Representation of couples in this situation is incredibly accurate. At one point, I was convinced actress Jessica Garton must’ve gone through something similar. A testament to the writer and performer. Her emotional bandwidth and slow decline in herself were next level. The audience followed her every decision, breakdown, and emotional gear change. This felt like her show, and we were there to watch her let it rip. With so much precision in her acting choices and delivery, we felt what she felt. To be at this level in her third year at drama school, it will be exciting to see where she goes next.

“XY” was written as emotionally unavailable and without much emotional bandwidth. This character was a huge missed opportunity. While “XX” had her moment to fall apart, “XY” wasn’t given as much space. And while this is realistic to a version of how this might be for couples, it would be great to see the depth of this challenging journey for him. “XY” keeps everything entirely sealed, but what’s the boiling point? When do we see his true emotional turmoil sing as loudly as his partner? After all, this is a journey that is just as difficult for both people. We don’t see when he decides to leave her, and I wish we did. At times you could tell this role had been written from a female perspective of how men come across. But there is much more going on for the counterpart, with a range of challenges often missed by women. While he presents as emotionally unavailable, it’s most likely from far too much pressure and emotional burnout. Not allowing this to be written into the play or seen by the audience robs “XY” of any empathy from the audience. However, Freddie is considered and thoughtful with his choices. He does well to give an honest and realistic performance of the character he was given. He delivers this character with an easefulness that left me wanting more. Freddie Tuson has beautiful chemistry with “XY”, and I’m excited to see how he develops as an actor.

The creative team behind this production is full of young, energetic, and fresh minds. From design, direction, and writing, the whole team collaborate and comes together flawlessly to share this story. The detail in production could tell the story almost on its own without any actors. The passing of time, slow decay of their relationship and decrease in fertility are all represented in a vase of flowers that rotates on the kitchen table, which I will never unsee. The scene changes with the same uncomfortable, looming soundtrack and dim lighting that hangs over the couple and increasingly gets more pronounced, behaving like all the things left unsaid and unacknowledged in the marriage. While simultaneously telling the audience that a breakdown is coming. The space was utilised fully and with so much consideration. A pillar that seems to run right through the middle of the stage inconveniently becomes a doorway, and wall and divides the couple more and more as they become disconnected. It seems such as important element to the overall production. Very clever. To be put on by such a young team, I hope they continue to work together in the future. What a bundle of joy you all are… couldn’t resist the pun. (Sorry, not sorry)

There isn’t much that doesn’t work about Bundle of Joy? every element of this show is meticulously thought through. Symbolism in the set, props, costume and design, creative direction, and honest and intelligent writing, all topped off with dedicated acting choices, gives us an incredible story. I am so glad I made it to the last performance of this play. Yep. It’s done for this year at the fringe, and if you got to see it, you were lucky. And if you didn’t, I hope it finds you the next time you’re looking for thoughtful, intelligent, and relatable theatre.

Showings of Bundle of Joy? have now concluded at EdFringe. Keep up with the performers on social media for future performances.