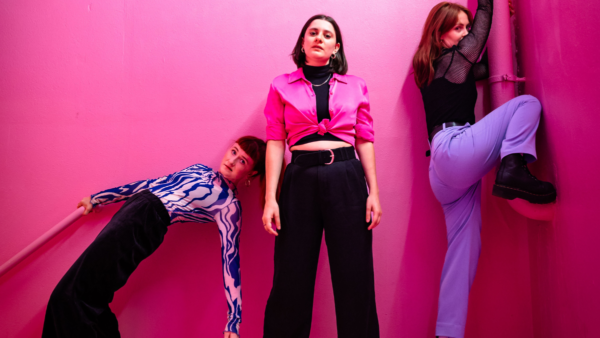 GirlPlay is an especially potent, visceral Slam exploration of bodies, sex, love and pregnancy. As an experience, it is really something to behold, offering punchy and audacious story moments with instinctive imagery and a sense of vibrant empowerment around language. It’s hard to pin GirlPlay down even just to one range of topics as it is so all-encompassing in its exploration of womanhood and the body, but we focus on subjects such as puberty, nights out, sex toys, pregnancy and miscarriage. These are packaged into sections by ages in a woman’s life, each performed by a trio of actors in a deeply lyrical, almost songful manner. Each segment is a gut-punch, with no frills language and blasé, characteristic attitude about bodies, sexuality and emotions. The show’s true triumph is to convert feelings many have about their bodies, their lives and handling your emotions into pure lyricism, evoking an emotive, powerful response from the audience.

Sarah Richardson’s script is delivered by three performers in slam-poetry style, the original text a response to the ‘Repeal the 8th’ Referendum in Ireland, handling the matter of bodily autonomy and abortion rights. Richardson has a canny ability to emotively contextualise women’s bodies outwidth a clinical or political setting, reclaiming the language used for that of culture and occasionally, myth. This mythic element is especially expressed in the repeated metaphor of bloodied sheets, which the script recognises as dominated by patriarchy, yet reclaimed here as a defiant and symbolic sense in the show’s final act. I won’t ruin the sentiment too much, but shows like these allow the creation of new, feminist mythologies which link to the material body and its corporeal relationship with culture. The overarching atmosphere created in this piece salvages the voice of people who feel they have little or no control over their bodies, especially in the cases of pregnancy and abortion, enriching the audience with powerful mentality.

The performances are a delightful mix of the absurd, often whimsical and yet passionately grounded. Scenes of powerful declaration against the patriarchy are interspersed with short interludes of the three performers leaping around in unison to heavy trance music. These divide up the segments but also remind you of the core context at the heart of this piece – playfulness, discovery, even in areas of great discomfort. Scenes describing our performers’ visceral first exploration of their vaginas, and then again rediscovering them in different contexts as they travel through puberty, their first sexual experiences, long term partners, pregnancy and so forth, are elaborated with a paralysing charm, with the performers reminding you that they are in the driving seat, both with their own bodies and also in what’s about to play out.

The rhyming lyricism and flow of the piece is deeply admirable, with the words twisting you down long corridors of explanation, then into alleyways of self-exploration and euphoric discovery. This is a piece foremostly about pleasure and pain, their relationship to bodies and emotions. It’s a piece extremely unique in what it uncovers – your relationship to the corporeal, to pain, to the pain of your partners or whatever your body experiences. GirlPlay is a truly energising reclamation of what it means to discuss our internals and externals, the abject parts of our bodies which are treated so differently in different cultural contexts. The whole thing refuses to let you take your eyes off of it, keeping you captivated with it’s ability to speak the truth so truthfully.

Performance of GirlPlay have now concluded at EdFringe 2022. Keep up with the company’s social media for future performances.