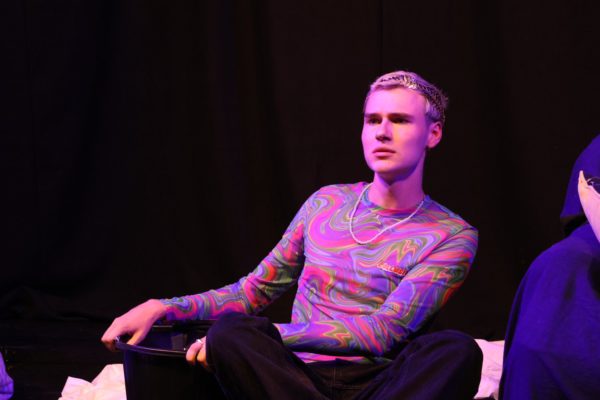 I really struggled to even know where to begin with this review. I’ll put my hands up and say, potentially I don’t know enough about Greek myths for this piece to have had a full impact on me, but the story is so bizarrely presented that I would say it is genuinely inaccessible to 99% of audiences. So before you read my review, if you are within that 1% who has an expansive knowledge of the Greek mythos and Ancient Greek plays then this play might be for you. As a regular audience member going in, I felt deeply confused by what was trying to be presented to me, to the point where I couldn’t follow a single detail of the plot. It’s fine for a piece to have a confusing plot, an abstract thematic nature or even no plot at all, but it feels like SATYR did want this to have a plot, and rather than transferring anything onto the audience, they’ve simply come across as pretentious.

The piece begins by introducing us to Adam, a young Gay man plagued with sexy visions of his Lesbian friend Cress. As Adam begins to doubt his sexuality, he falls out with his roommate Iggy, who is also a Gay man, even to the point of verbal hate-crime by the end of the play. A man called Adlai arrives claiming to be from some Kafkaesque services agency that plans to turn Adam’s life around. It isn’t long before they start to descend into an odd whirlwind romance, making Adam question and accept his queerness for what it is. Alongside this, we are treated to odd visits from Hyacinth, a Spartan prince, and also from Arachne, a sort-of Spider Queen. That’s the best way I can sum up the plot – and that’s with a lot of thinking. The language in this play seems to attempt to mirror or reflect that of Ancient Greek plays. This is a novel idea, except the whole thing lacks the dramatic chops to back it up.

You sit and watch as meaningless, drawn-out phrases get bandied around the room, then a character leaves, and then another one comes in. This isn’t supposed to be an absurdist piece, by the way, even though it vastly comes across as one. It never once invites the audience to come along on the journey, instead pushing them to the outside to observe events happening with zero connection to the characters. The performances are half-decent from what I could tell, but all of the performances lie behind this opaque sheet of language and myth that make it completely inaccessible to an audience member. Truth is, if your play has required reading before you come in, then you’re maybe not doing it all right.

The piece just about picks up in pace at the end when Adlai and Adam accept one another, but everything before that feels distant, removed, impenetrable. I was hoping to walk in and see SATYR connect Ancient Greek plays to a modern era, instead I left feeling bored and disinterested, as I’d spent the second half waiting for it to be over. All SATYR needed to do was make this something people can sink their teeth into, rather than kicking them in the jaw with bizarre plotlines that trail and lead into the distance. Avoid this one.

Recommended Drink: Grab yourself a jug of mead for good measure.

Want to see if you disagree? Catch Grecian Idolatry at Greenside @ Infirmary St, Olive Studio, at 23:15. Tickets are available through the EdFringe Box Office.