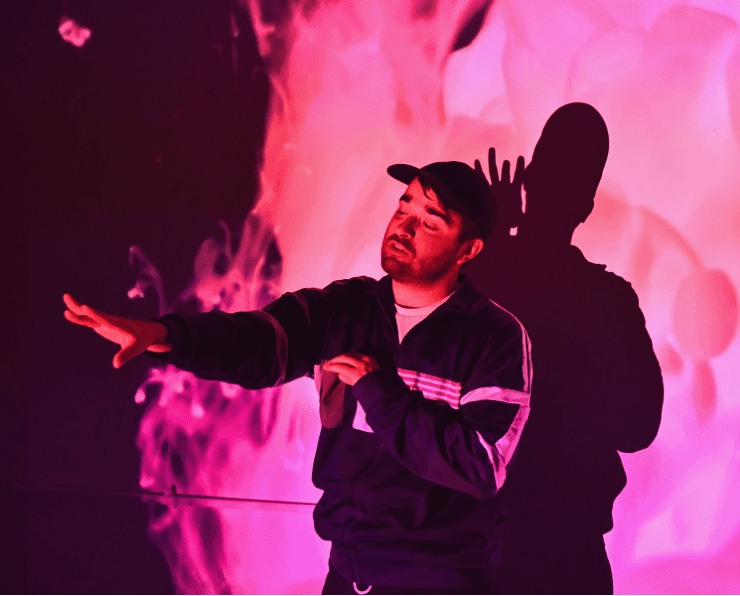 No Place Like Home blends and blurs everything that it tackles, sitting on a boundary of genre, theme and morality. Connor is a young queer man on the cusp of exploring the nightlife underworld of his only local Gay bar. Rob is a bartender at said club, lifelong patron and disenchanted with the scene and its ebbs and flows. Roberts performs solo against a projected backdrop of neon flux and moving image. He dances, sings and flows around the stage, taking maximum use of the stage to create a space in which to inhabit. This is an utterly enthralling, devastating piece which asks us to look at the cycles of violence in the Queer community through a lens of euphoric highs and destructive lows.

Connor is heading to his first ever party, the birthday of the only out-Gay kid in his school, pale and tall, who he idolises with Twilight-esque vampiric fantasy. When school drama fades and settles, the lights open onto Rob through an unexpected encounter in the bathroom. In a whirlwind romance, Rob whisks Connor through the seminal queer night out, the ecstasy of dancing, connection over karaoke blossoming into meaningful romance, a literal dick-measuring contest and the rupture of the blinding morning light.

As dawn begins to break on the pair, nurturing touch and sensuous feeling turns to drunken violence and sexual abuse. The turn-about-face in Rob’s character is deeply troubling, yet also so utterly prevalent in queer spaces. No Place Like Home takes on the “Nowhere else to go” paradox of gay clubs and makes us consider how we can stop the vicious cycle of harm that enters these places which should be sanctuaries. This is an urgent, nascent topic that is dealt here with nuance and verve, engaging you emotionally and provoking a feeling of anger, a lack of control in the audience. Someone who should have been nurtured, protected and made to feel part of the community is aggressively attacked, and this builds and perpetrates the violence further down the line. It’s handled intensely by Roberts, but to present the depth and depravity of the matter it’s required.

Roberts floats around the stage with charisma, style and purpose. At the times he isn’t floating, his body snaps and pops into place, dividing lines between Rob, Connor and any other characters in the piece. The whole stage feels like a night club dance floor, completely inhabited by Roberts in his natural environment. Connor’s innocence and youth fizzes off of him in a glistening but toxic glow. The whole piece sparkles in a divine sense of purposefulness, every sharp movement cutting an edge into the story, every floating, slow arm movement gliding us in an instant of reflection. The use of a cap flipped back and forth to identify characters, along with a unique neon colour scheme, brings instant recognition to the audience. The characterisation is neat, poised and refined, you feel completely comfortable in Roberts’ hands.

And he really does have us like putty. The whole experience for an audience member is just mesmerising – watching him move, speak and transform under the glow of the lights brings you right into the space he creates. He beckons you toward a light, blissful sensation and cuts right through you with the gritty, dark underbelly beneath the veneer. It’s a dazzling achievement, offering voice to Queer people who suffer from abuse and yet providing a sense of nuance that this is something systemic, something which is manufactured in young, often troubled men at the cusp of their adulthood and sexual maturation. Vibrant, dark, but dazzling in a glow which you can’t escape.

Recommended Drink: Grab yourself a flaming sambuca, let the night kick off, unfurl the darkness that lays below and let yourself be taken in if you want to understand.

Catch No Place Like Home at the Pleasance Dome – 10Dome at 14:55 until August 29th. Tickets are available through the EdFringe Box Office.