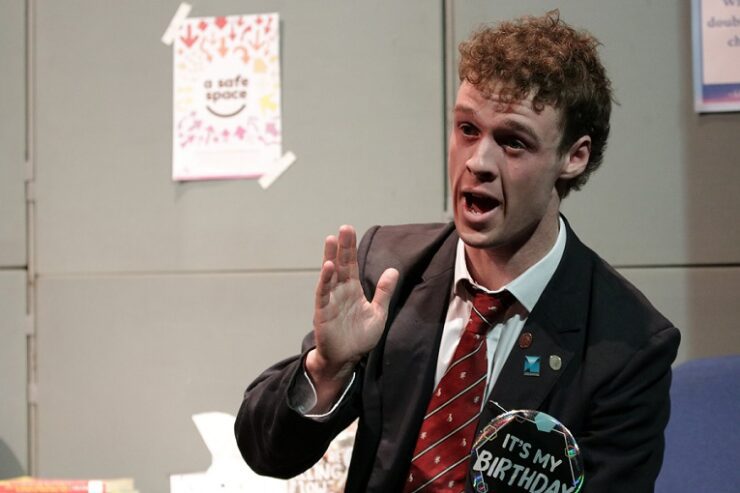 The weighty and heartfelt topic of mental health in young people can be a difficult thing to meaningfully transfer to the stage in a way that offers impact. Alright? has a decent go at trying to replicate, interpret and explain the lived experience of young people in lower-Middle Class Britain. It tackles the indescribable weight and pressures they feel on their shoulders, and in this instance how it directly affects Noah, the individual we focus on.Noah is an ordinary boy in Year 10, about to take his exams and feeling that institutional worry that these exams will decide the rest of his life. He steps into the school counsellor’s office, and his journey to understand his mental health begins.

We follow Noah through his life on the school cricket team, making a fool of himself at prom and then progressing onto college, where things begin to spiral quickly. He falls into the pressures of drinking with his friends, distracting himself from the issues he faces and making questionable decisions with his time. Alongside a solo delivery from performer Thomas Price, we have audio performances of his Dad and Nan, both also struggling in different ways to heal and understand themselves. Things hit a major climax as Noah confronts his Dad, who just doesn’t understand why his son isn’t being himself, and the two try to hit on a point of reconciliation, learning and growth about one another.

The piece is filled with little chuckles and breath-laughs. It’s not quite clear whether the humour is supposed to be slightly more laugh-inducing, but the jokes within the piece often come across as both relatable and a little inane. The subject matter of the jokes is definitely pertinent and able to be understood by a variety of different types of (mostly British) audiences, but they are pretty tame and the subjects of the jokes feel so obvious that it doesn’t surpass a chuckle. If the humour is meant to be an addendum to the piece’s core story, then it works just fine, yet that intention is not especially clear. The jokes mostly cover Noah’s outward awkwardness and his difficult relationship with a Teenage world, and other quintessentially ‘British’ experiences.

The piece’s core relationship to mental health is a complicated one, and I want to say outright that a lot of the next section of this review depends on my personal opinions on treating mental health. I feel as an explainer, it does a fabulous job of exploring the messiness of the mind, especially at Noah’s age. The explication of Noah’s internal processes, about coping, struggling and wiling away time, feels poignant and relevant, and the show would do well, I think, to tour schools and interact with people directly at that age. The issue it may have to correct if it does so is the slightly problematic conclusion which it lands on after Noah and Dad’s argument, that making change in Mental Health relies on opening up and checking in on those around you. This is personal feeling, but the piece does little to focus on recognising the signs of when someone doesn’t want to open up. The characters surrounding Noah take his word for how he’s feeling and his father explodes only on the point of seeing him staring down the bottle.

That is a fine way to open the conversation, and actually I was thinking that this narrative would be leading to a conclusion of recognition rather than one of ‘checking-in’. The issue with saying “We need to check in on each other more” is that it still maintains the onus on the sufferer to explicate themselves and how they are feeling through language alone. The piece does little to explain how we get beyond the dialogue of “How are you feeling?”, with a response posed by the questions title, “Alright”. The piece’s finale seems to land on the nugget of “How are you really feeling?” which doesn’t transcend the initial expectation that sufferers might not be able to articulate themselves, nor may they feel any more obliged to actually explain it if they can put it into words. Don’t get me wrong – I think it’s a valiant thing to take a show about mental health with such strong and vivid explanatory instinct to the Fringe, I just worry that the message doesn’t help sufferers to articulate themselves much better, instead stopping just short by suggesting we need more emotionally open relationships. I just don’t know if that is enough for many people.

Putting that aside, I want to finish on a high note, and that is one of absolute praise for the central performer, Price. Despite the slightly unwieldy script and sedate humour, he manages to captivate and impress, as well as carry the piece for the full fifty five minutes without losing our attention. He doesn’t necessarily come across as a boy in Year 10 – mostly because he’s tall and definitely appears a fair bit older. But that actually works surprisingly well, and it feels like a piece reflecting and explaining rather than being ‘in situe’. That whole aura offers a lens of nostalgia and self-expression, and it is a genuine pleasure to sit and watch Noah develop, even if as a character he struggles a lot. His performance is complimented by the excellent production design, with a nicely built and designed set that allows him to travel between places, times and instances with ease, creating control over the narrative.

Price is a dominating performer, greatly notable in his ability to create an impression on his audience. He manages to keep this piece together, as it probably needs a hefty bit of refocusing to make the impact it deserves.

Recommended Drink: Head over to your Nan’s for a Whiskey and a catch up – she deserves it!

Catch Alright? at TheSpace on the Mile – Space 2, at 18:45 until August 27th. Tickets are available through the EdFringe Box Office.