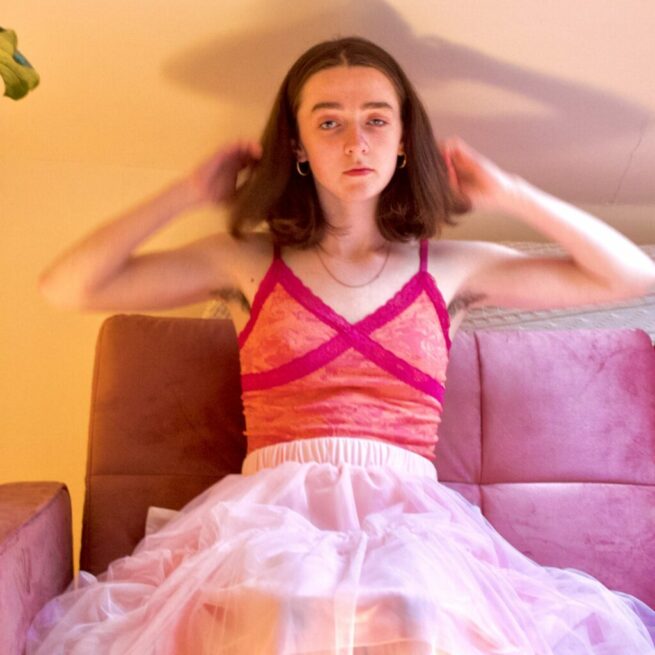 Cheeky Girls follows the story of Freddie, a young Edinburgh Uni student finding her feet in a world of hangovers, hook-ups, history and hedonism. And acai bowls – but that doesn’t quite fit in the alliteration. We catch up with Freddie as she awakens from another night of boozing, evicting her booty call from the flat and having afternoon morning tea with her flatmates. Oh, yes, I didn’t mention – the piece is part performed in over-the-top regency-esque costume, with the actors floating around Marchmont and the Meadows in ball gowns on a daily basis. Now this will be an interesting review to write, because I have a lot of thoughts about how to improve this piece, but there’s a real spark of energy underneath it that gives it a solid four star rating nonetheless.

Let’s start at that spark. The central performance from Emer Williams is just about flawless. She captures the energy of the enigmatic, slightly disaffected, hedonistic university student with ease and poise. You definitely don’t fall behind Freddie in her decision-making abilities, but she captures a real essence of utter boredom with anything that isn’t excessive and self-indulgent which you see among so many Edinburgh University students. This piece is a delicious slice of irony, given it originates from the aforementioned Uni and is dipped in a sense of witty self-awareness as to just how conceited the whole affair of University life in this city is. Williams sits at the centre of that swirling universe, unbothered by anything which doesn’t float her ego. Is it the constant boozing, consistent poor decision-making or agonising self-belief? Cheeky Girls leaves it up to you to guess.

The supporting performances are generally equally as mischievous and self-offending. Minna Gillett’s performance as the middle class, zen hipster laps up the audience’s attention whenever she’s on stage, whilst Georgia Gabrielides’ whiny and woeful sidekick is constantly in self-induced turmoil. The capers collected by this piece’s fragmented look at student life keep you laughing the whole way through. From a life-size swipe at Tinder with ridiculous men who seem uncannily familiar, to an actor in a pigeon costume recurringly hovering around the stage and shitting on Freddie in her worst moments, you’re always right there in the moment with them. The pace is rapid, laugh-a-minute, cry-a-little, chaos that rapidly churns out more and more scenes to the end. This is to mixed success – the stuff that’s working really works, the stuff that doesn’t just leaves you waiting for something more exciting to happen.

This show definitely has its dips and troughs in pacing. There is a repetitive joke where Freddie keeps bumping into men on the street who approach her under a number of auspices, but all essentially end up asking for her number. The first couple of times, it’s funny, but I can’t help from feeling like it’s a bit of a lacklustre plot cycle by the end. The same goes for watching Freddie consistently wake up and slap a dress on – it feels as though the writers and directors maybe need a reminder that they can try and show-not-tell as they need to. As I say though, this doesn’t really take away from the high points of the piece, which are so damn delicious that you’re happy to wait for them to cook.

Now I’m going to mention the F-Word. There’s a meme going around this year about reviewers comparing anything written by a woman to Fleabag, which I thought I was going to escape but alas, this piece makes pretty evident reference to it. Fleabag is a seminal piece in lots of ways, but the thing it revived is the cliché of “I’m talking to the audience but nobody else can see them.” This piece does take a really original look at the issues it’s taking on – which actually become quite serious towards the end of the play and you realise how Freddie is being swallowed up by the toxic environment around her. I would just say to The Counterminers to tread lightly to avoid aspersions and comparisons to Fleabag, as I’m very aware that they are an exceptionally capable bunch of creative people who have a lot to offer.

Back to the good stuff, I’m going to put the above aside for a minute and talk in more detail about Florence Carr-Jones’ script – which I love. It makes such clarity out of a messy world and puts the perspective of the hedonistic, indulgent youth (a trope often used to deride young people from an older writer’s perspective) in a swirling, intoxicating world which justifies the need for a good night out, but still warns you of the social dangers of kissing a 75 year old for a free drink. The language used is stupid but smart, the plotline develops into a swirling spiral, we see Freddie dragged in beyond the event horizon. While not a likeable person, Freddie is a relatable one, as we see her toward the end start to come to terms with the fact that her actions do have consequences. There’s no room for reconciliation in Cheeky Girls, just a recognition that we can all be overly self-interested, overly self-absorbed, and maybe we just need a pigeon to shit on us and to shout at an elderly Priest to break that cycle.

Cheeky Girls caricatures the swirling, intoxicating life of a student with purpose. That purpose is to make you giggle, gasp and groan. Self-aware and raucously funny, be sure to catch this one for an hour of laughs.

Recommended Drink: Cheeky Girls’ story reminds me of a Bucky-Bomb on the Cowgate, there’s something so Edinburgh about it that you can’t help but laugh.