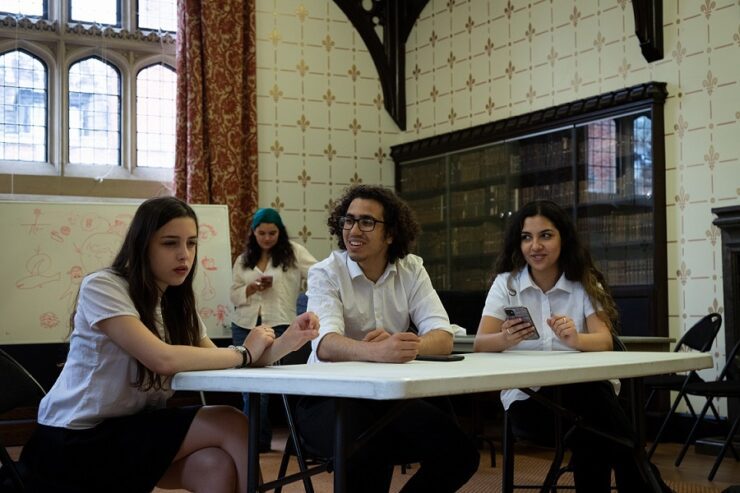 Life Before the Line is a kaleidoscopic, all-encompassing, coming-of-age story tackling a terrorist alarm going off in a school in Manchester. It is a beautifully written story with so much depth and talent on offer. Swirling around a central scene as the alarm blares, we follow non-chronologically the stories of four teenagers. They come to terms with being Jewish in a world in which they often have to hide their identities, for their own safety, alongside the trials and tribulations of being a young person growing up in Britain. Alongside subplots of queerness, cystic fibrosis, this piece explores youthful British Jewishness and its place in a modern British society. Vibrant, soulful, reflective and deep, this is something special.

Esty, our central focus for much of the play, is a middle-class girl who has ended up accidentally vandalising her teacher’s car – much to her Mum’s distaste. Her love interest, Allister, is constantly finding himself in trouble and does everything he can to neg and instigate the people around him. They fall in a genuinely quite sweet romance, which has a little more nuance in exploring how relationships can still be toxic and emotionally damaging especially for teenagers. The piece never belittles or underestimates what happens to younger people, exploring their issues with verve and a meditative tone. Each of the teenagers take turns speaking to the audience and explicating their stories, this was unexpected but delightful, as each one of their perspectives sparkles.

Esty and Allister clearly come from different walks of life, and Amy Lever’s script takes a healthy dose of class analysis to explore Esty’s privilege and the variety of experiences of kids in this part of Manchester. The other stories explore such diverse topics, Sara comes to explore her bisexuality against the backdrop of her Iranian heritage. Danny, her twin, is suffering from cystic fibrosis and is awaiting a lung transplant – news for which comes just as the terrorist alarm goes off. We explore Danny’s illness as he tries to travel to New York backed by a Jewish heritage foundation, coming to terms with the limitations it places on his life and how it affects his identity. That same trip affects Allister, whose mother was a convert, and the piece here tries to handle the “Who is a Jew?” question. Should we view Judaism as something ancestral, genetic, cultural, religious, a patchwork of all of those? This is an important question to the Jewish community, and the show takes time and care to show a rounded Jewish experience.

The general representation of Jewish holidays, cultural practices, traditions and roots is just a gorgeous thing to witness. It weaves so naturally into the performance but without ever leaving you out in the cold about what’s going on. The characters take time to express their feelings about the traditions in their families, how they understand and modernise them. From a Purim parade, to buying Kosher food for grandma, and how to say sorry on Yom Kippur. It’s a masterful feat to make the audience, whatever their background, feel apart of the experience and at home throughout. The whole feeling generated allows you to establish a great emotional connection with each character, as you have a deep cultural and identity-based texture to enrich them within.

Performance-wise, the piece is stellar across the board. Esty is a fabulous central character, performed with wry sarcasm at her height and an introspective inquisitiveness in her emotional lows. Sara is another stand out performance – fraught by her frustrations exacerbated by that glossy teenage lens of uncertainty. Special kudos to an actor who often filled in for the Mother roles of the characters, despite being a younger actor you’re completely believing that she fits the bill of a Mother, with a caring, light touch that adds to the atmosphere. The whole piece is filled with joyful moments of expression from the actors as events unfold, and layered with so much context and subtext that you are immersed in it’s world. This is top tier Fringe material.

The show discusses hate, anti-semitism and discrimination through a lens of privilege, and many of the characters undergo a rapid transformation as they become exposed to the hate surrounding them. The show ends with a consideration of the Manchester Arena bombing, served with relevance and considerate feeling. Some beautiful metaphors describe how our characters have to hide their identities, delivered by the Rabbi at their school. This piece is a subcultural phenomenon, shining light on the life of British Jewish people in this small pocket. It is an expressively Manchester-oriented piece, and it’s so pleasing to see such hyper-local productions with such evident clear affinity and nuance in exploring their origins. Moments of joy and laughter are interspersed with deep, thoughtful drama. A lucid, flourishing piece – Life Before the Line is a magical dramatic experience.

Recommended Drink: Grab a bottle of vodka and head down to your first ever teenage party – where you’ll snog your best mate and question everything about your relationship. What can go wrong?

Catch Life Before the Line at TheSpace @ Venue 45, at 11:20 until August 27th. Tickets are available through the EdFringe Box Office.