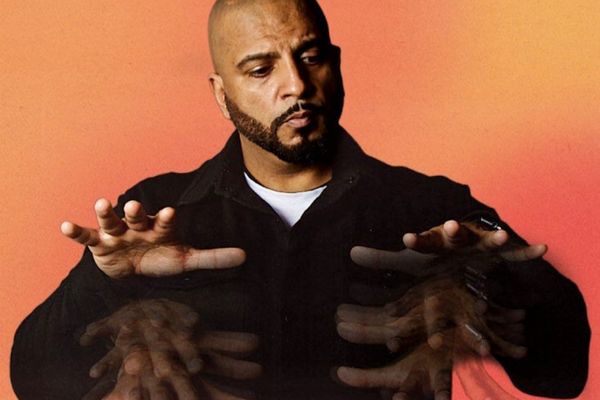 Ripples of audio and shocks of bright light recur throughout Rinkoo Barpaga’s one hour retelling of his life story. Sometimes they are representations of his experiences – like having a hearing aid put in for the first time – sometimes of the dissonance between the hearing world and the world he experiences. This is a brave piece which doesn’t mince its message for a moment – we are here to understand Barpaga’s intersection, being a Deaf British Indian. His lived experience is the key to understanding the oppression and intolerance he has faced in his life, but also how he has come to find community, brotherhood, and completeness in his life.

Rinkoo signs the performance in BSL, which is then voiced by another actor. We begin with his humble beginnings growing up in Birmingham against the backdrop of the rise in fascism under Enoch Powell, through his transcendent experience at a Deaf College, then to the difficulties of adjusting to adult life. At a deaf club, he is mistreated for his ethnicity, racially abused and discriminated against. Barpaga takes time to explore how while the hearing world adjoins its discrimination against race to deaf People of Colour, within the deaf community he similarly experienced discrimination and racial abuse. The themes which Barpaga explores range from class, visibility, mental health and many more. We witness Rinkoo grow into a man over the hour, and uncover what it means to find acceptance among a group of people who understand and respect you as one of their own.

The themes are explored well and the particularly captivating moments occur when Barpaga uncovers some modality of lived experience which hits on something the audience might have not thought about before. Beyond the enthralling moment he describes his family being held at gunpoint in India, or being attacked by skinhead thugs on a bus in Birmingham, Rinkoo holds up the mirror to our world and asks it to consider it through his lens. The diary style of storytelling works pretty well in establishing an emotional investment and connection to Rinkoo, especially given we follow him across the course of his youth and becoming an adult, you feel like you see a man uncover the way the world sees him, excludes him and the places in which he can find comfort and solace. It does have the small drawback of not having a particularly great narrative arc – we jump from story to story in Rinkoo’s life and because of the breadth of topics discussed it does feel as though the piece spreads itself a bit too thinly sometimes.

The physical performance from Barpaga is utterly mesmerizing. His signing moves fluidly into physicality, the whole piece having an immense flow which moves Rinkoo through the world and we see him respond to the way the world was designed. As a piece focused on deaf lived experience, we are not treated to much allegory or metaphor, instead it is very neatly focused on creating a grounded retelling of his life story. The format is delivered in a black box, single speaker style and it feels as though this was the best medium – rather than having to draw our own conclusions Barpaga wants us to explore his world and the way the Hearing World challenges his experience and even his very existence.

Bold, fascinating and genuine, I feel I genuinely came out of the show with a different perspective on life. Hey, what more can a Fringe show really do?

Catch Made In India/Britain at the Pleasance Courtyard – Pleasance Two, at 13:40 until August 29th (not the 23rd). Tickets are available through the EdFringe Box Office.