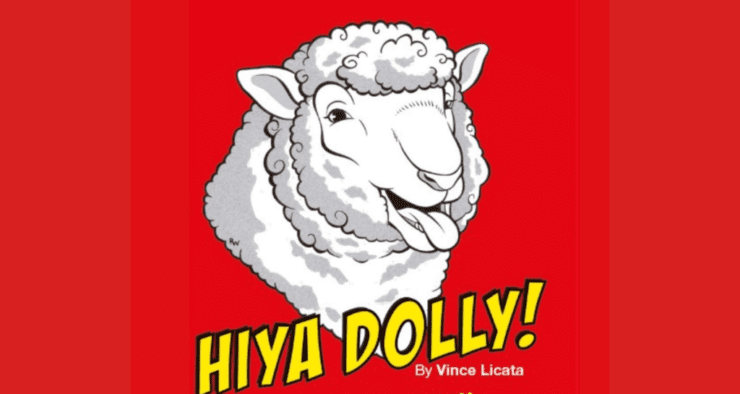 Hiya Dolly! Is very much one-of-a-kind, just like Dolly the Sheep herself (or not, as we actually find out in the show there were 4 more exact clones of Dolly, but the joke stands). It’s a unique piece of gig theatre centred around the inner workings of the Roslin Laboratory where Dolly was created, with an anthropomorphised, all-singing, all-dancing version of Dolly in the lead role. Extremely cutesy, wholesome (mostly), and dazzlingly fun, it’s great fun to be in the room. Unfortunately, there are quite a few things holding it back from entering the hall of Fringe greats. It feels like a lot of retuning is needed to make it shine in the way it deserves, and that’s what we’re going to unpack here.

Let’s start with what’s good, and you won’t be disappointed. Dolly tells us about her “two dads” – Ian Wilmut and Keith Campbell. Wilmut looked after the funding and project managed the cloning process, while Campbell managed the bench work and got his hands dirty keeping the whole thing chugging along until Dolly was born. The piece aims to dispel some of the gossip and myths about what happened by demonstrating just how many people, and oocytes, were involved in Dolly’s creation. In this sense it’s more of a family drama framed inside a science lab than anything else. But don’t be fooled, Hiya Dolly! gives a hearty go at trying to explain the science behind the cloning process, even if it does feel a little bit GCSE Bitesize at some points – to put it plainly, a bit cringe.

The whole play is doused in a light of jolliness and a playful sense of Dolly’s Scottish identity. Let’s not be subtle – we’re talking “I would walk 500 miles”, “Will ye go lassie go”, and “Loch Lomond” changed with lyrics to fit the backstory. The music is very fun, and a bit groan-inducing at times, but it isn’t long before the audience claps along. The live guitar, violin and mandolin accompaniment makes for a great atmosphere and the piece never slows down, not even for a minute. It’s very easy to get stuck into the family-friendliness that’s presented early on, everything taken with a healthy dose of humour and glee. A side plot following lab technicians Bill and Marjorie in their lab-romance is a little bit saccharine and over the top, but makes for a fun addition and is probably the most enjoyable part of the story. Watching Dolly perform for the cameras as she’s born is also a highlight, the whole thing has such a playful energy which keeps you placated, but not necessarily always intellectually stimulated.

The performances on show are a mixed bag. Mark Beauchamp’s Ian Wilmut is really at the heart of the piece, and his chemistry with co-conspirator Keith Campbell (John Fagan) is very enjoyable, watching the elastic tension burst and flow between the two as the project develop keeps the story chugging along. Jessica Donnelly as Dolly is undoubtedly the star of the performance, embodying pure Scottish glee, funny banter while never entirely losing her sheepish characteristics. On the flip side, unfortunately there are some serious issues with accents going on in this piece. Some of the actors, who are presumably American in their natural accent, really struggle to put together a convincing Scottish accent and the whole thing leaves you clenching your teeth a little as you hear it. At points, it is genuinely unclear whether someone is attempting a Scottish accent or a native one, and I honestly got a bit of second-hand embarrassment.

The piece takes an utterly bizarre look at the death of Keith Campbell, one that feels genuinely a little bit insensitive at times, both to Campbell and to the audience’s own sensitivities. At one point in the play, an actor comes out and declares that “Keith had committed suicide”, and the whole tone of the piece goes a bit awry from there on out. The script here could do with a bit of retooling to take the time and care with which they do to explain oocytes and nuclear transfer in cells to human experiences and deeply personal topics like someone taking their own life. The whole language surrounding his death feels, well, clinical. I get that it’s important to tell the story as it happened, but it does feel a bit as though the piece could have tied itself up quite nicely at one point rather than spending nearly ten extra minutes on the end of Campbell’s life.

Up until that point also the piece has a generally family-friendly feel. I felt that the language surrounding someone taking their life, especially when you know you have children in the audience, needs to be careful and poignant rather than clinical and explanatory. This is a piece which revels in the chance to bring science to the stage, bringing a cheesy and cheeky look at the cloning of Dolly the Sheep. Maybe its creators need to take a step back and give it a good spring-shearing to deliver the fun, frolics and education they were aiming for.

Eccentric, silly, but above all grounded in science and storytelling – this is one to catch if you don’t mind singing “Baa Baa Baa Baa” to the tune of the Proclaimers with the cast members.

Recommended Drink: Hiya Dolly! is a Rob Roy – plainly Scottish in its ingredients, but the Americans are the ones who put it together.