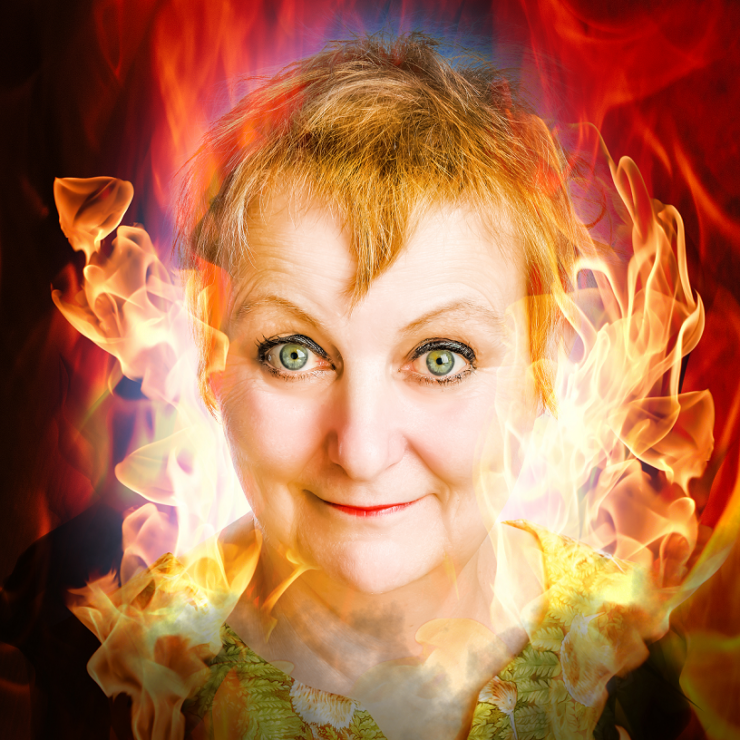 Hammer Horror, Colossal Squids and solidly fantastic standup. Charmian Hughes has it all. She is joyfully silly and beautifully condemning, masking satirical quips with an impish charm. A true professional and a pleasure to watch.

Being really simplistic, this show explores female representation in the media, stereotypes about age and how we all should (or shouldn’t) try having a murderous, immortal queen as an inspiration. Served with a hell of a lot of mischief, clowning around, and jabbing at the right. Although, I’m not sure why you’re still reading this, go book a ticket and see it. We’re not living forever.

Throughout her show she discusses and advises on ‘womanly’ ways. She suggests the ultimate female should succeed at calligraphy, Scottish Dancing and bassoon playing. I can’t see anything wrong with that. In fact, I may take some notes. She analyses the shaping of her views and behaviours throughout her life. Despite her childhood fascination with a horror film, her greatest fear is scarier than anything that fits on a cinema screen. A woman not getting over a man… ever? It’s a real threat to society and one that’s plagued many. Even Charmian herself. She tells nightmarish stories of running into her first love “unexpectedly”, the thought is enough to strike fear into even the most securely attached audience members.

I didn’t mind being the butt of many of her jokes. In fact, I felt honoured. Roasting the demographic of ‘twenty something female’ is always a crowd pleaser. Especially in a room full of the opposite. Although, I didn’t feel bad because no one was safe. Charmian used her ‘matron after a sherry’ esque power to character decimate everyone, including herself. I genuinely feared for the lives of the ‘male twenty somethings’ determined to have a chat mid show. She quipped, ripped and left them shaking. You can tell she’s learnt from the best. Her lessons from ‘She-Who-Must-Be-Obeyed’ have clearly paid off. She’s hilarious on and off script, a truly great comedian.

Her impressions take the biscuit and she sprinkles them purposefully throughout the set. They are absolutely ridiculous and the best kind of campy. She uses various accents and props to personify unimaginable things, (I’m not spoiling it for you – see the show). Naturalism is tossed aside to favour the funny. If you’re looking for straight impersonation, look elsewhere. If you’re wanting to belly laugh, you know where to go.

When she isn’t being self deprecating, Charmian has a deliciously naughty sense of humour, reserved for THAT wine filled aunt at Christmas. You know exactly what I mean. Her ability to flip between the two makes her set so entertaining and kept her audience engaged throughout. A real powerhouse of a performer!

Recommended Drink: Sauvignon Blanc in a glass the size of my head.

Catch Charmian Hughes: She! Immortal Horror Queen’s Guide to Life at Laughing Horse at The Counting House – The Attic,18:00, until August 28th. Tickets are available through the EdFringe Box Office.

REVIEW: A Society (For the Cutting Up of Men), The Network Theatre, VAULT Festival ★★★☆☆