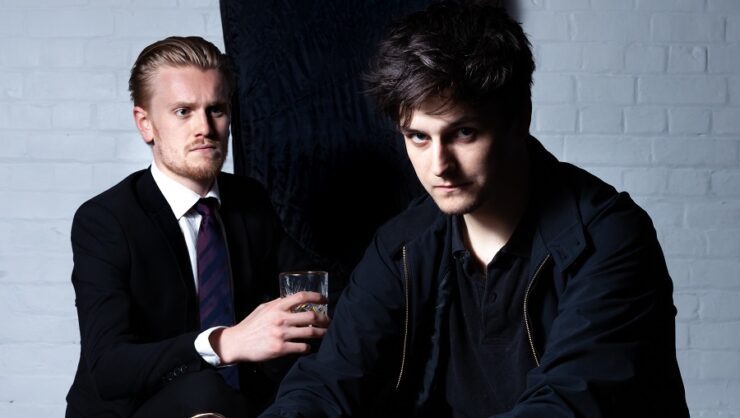 Imagine finding out you’re dead right in the middle of New Year’s Eve with your girlfriend by your side. What a party pooper! Luckily, You’re Dead, Mate, the debut show penned by Edmund Morris and performed by the former with Harry Duff-Walker, pops with energy, black humour, smarts and bizarrely, joy.

Our central unnamed character wakes up in a dark room, met by another man in a black tracksuit swinging a beer about the place. While he initially thinks he’s been kidnapped, and convinced by the track-suited man that the closest he might consider to where he is now Is Coventry, we eventually learn that he is in the in-between, purgatory. Our track-suited guide is Death himself, the self-described “morbid gondolier” leading him to the afterlife. Death soon realises that our man has some unfinished business to resolve before he can pass through to the Great Beyond, and it’s his duty to help our man accept that it’s time to go.

You’re Dead, Mate’s story is poignant and touching, but with plenty of self-awareness too. We initially her the whines and groans from our man as he realises he’ll never see his family and girlfriend again, never go on a night out again, and never be able to realise the life he envisioned for himself. In life, he was caught in the corporate track and hoped to build stability financially so he could retire soon enough to truly enjoy life. It’s a relatable story, definitely for many taking time off to do things they like such as enjoy this festival, but Death brings us (ironically) back down to Earth.

One of the absolute triumphs of this piece is how Death makes our man realise how much privilege he had, and how much time he wasted. Through dark humour, discussions of Rasputin shitting himself when he died, Julius Caesar being boring and most importantly – the countless people Death has met who welcomed him with a warm embrace. Death is initially frustrated with our man, trying to make him realise how lucky he was, and how little he used that luck to actually enjoy himself. It should be quite the sobering experience, but as Death says, our man is free to enjoy the complimentary selection of booze now it can’t hurt his life expectancy any further.

Realising he will need to help reconcile our man’s woes before he can pass on, and that simply blaring his privileges at him might not be the best way to do that, Death passes our man a microphone. He asks him to say out loud everything he would say if he had one last chance to speak to his girlfriend. There we uncover a tragic secret, which leads Death to help our man as best as he can toward his destiny.

The performances from Morris and Duff-Walker are spectacular – they dip and dive around each other, teasing and challenging through emotive characterisation. The quips from Death are wonderfully thought through, and as a concept Morris’ script takes full advantage to pull apart purgatory and find all of the funny within it. Duff-Walker evolves from a whinging, lost soul into someone faced with the cosmic indifference of the universe to his plans. The pair’s chemistry is palpable – and only ultimately realised in Death’s final monologue (no spoilers), which is a breathtaking moment of theatrical, cathartic joy.

You’re Dead, Mate wants us to look at our consumerist, work-till-you’re-dead culture and think about the bare essentials of our existence. Life is short, yes, and Morris holds up the mirror to all of us in this fleeting moment of introspection, asking us – have we been ourselves enough? Have we really lived?

After the show I spoke to an audience member who told me she was a nurse – in her words, “This show opens the doors to the kind of conversations we should be having about life, and death. It’s a part of everyone.”

You’re Dead, Mate is a poignant, kaleidoscopic, introspective exploration of what it means to be mortal. It is gorgeously performed, with eye-watering laughs and eye-watering drama. Get yourself to see it, take a moment to look inward, find time to be awestruck by this fabulous piece of theatrical genius.

Recommended Drink: Get down to purgatory and get yourself a Hendricks Gin and Tonic – with black pepper of course.

Catch You’re Dead, Mate before you wake up in Coventry. It’s playing until August 27th (not the 14th) at 21:05 at TheSpace at Surgeons Hall, Theatre 3. Tickets are available through the EdFringe Box Office.