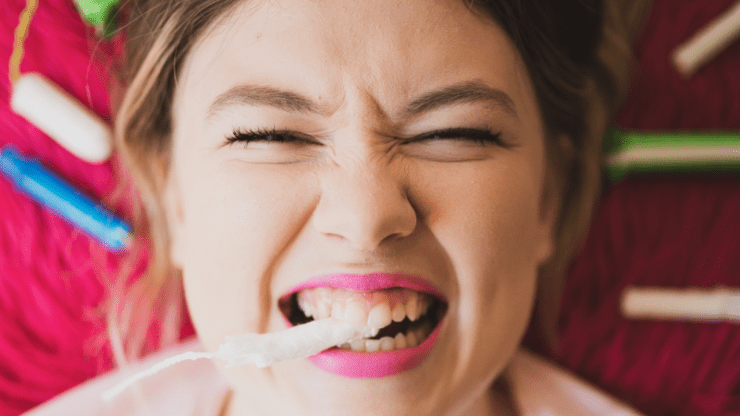 Esme’s introduction to womanhood has not been what she thought it would be. This honest portrayal of the life of a young girl growing up was so realistic it was like remembering all the things I’d forgotten about being a teenager. Period, tampons, boys, dr. Google, sex, heartbreak, a fantasy life in Paris, body image, it’s all there. There isn’t much that’s forgotten about puberty in Up Her Sleeve. Very reminiscent of Angus, Thongs, and Perfect Snogging, it’s endearing to remember what it was like to be so naïve.

From conversations with her egg at twenty-two, Esme rewinds the clock back to life at fourteen. We then slowly catch back up to her in the present day. The full circle moment from start to finish was a delightful way to complete this show, and it showed how her mind and views had changed as she reflected on her life. During the flashbacks, we see Esme learn to use tampons, take a pregnancy test, lose her virginity, and as she matures, realise that her period pain and mood swings are more than just “”being a girl.””

What was beautiful about this show was the innocence with which Esme’s younger self shone through. It was vulnerable and believable, and it almost felt like someone was showing me a movie about adolescence. Her physicality stood out in this piece, and there was no half-hearted effort. However, seeing a much clearer shift between ages would be great. While Esme’s posture changed, there could’ve been more. Particularly her voice stayed at quite a high pitch throughout the show.
What didn’t help this was the technical difficulties. This, by no means, was Esme’s fault, but the transitions as she grew would’ve had a much more significant impact. With good writing, honesty and physicality, Esme showed she has a good foundation for a great piece. However, there were moments the energy dropped. More synchronicity between music, physicality, and monologuing would lift the power throughout the piece. The scene where we see Esme having sex and speaking directly to the audience is hilarious and full of energy. More moments like this would really bring to life the whole show.
The boiling point right at the end of the piece, where Esme has a breakdown bringing to full realisation the current problems in the healthcare system for women, the effects of listening to everyone else and not yourself, left the audience empathetic for the struggle a lot of women face when dealing with their fertility.

Overall, Esme deserves a massive mention for her devotion to her younger self and believability. She shows great potential; Up Her Sleeve could leave a mark with a little more development. A great show for anyone wanting to reminisce, giggle and understand further a topic that is so often kept in the private journals of young women.

Recommended drink: A glass of vino because you will need it after all those birth control pills.